The scalar is rightfully considered one of the most beautiful aquarium fish. Therefore, it is not at all surprising that breeders have made every effort to obtain a large variety of breeds of this attractive cichlid. One of them will be discussed in our article. Meet the golden scalar!

Golden scalar (Pterophyllum scalars var Gold) is a selective form of the common scalar. Also, the fish can be found under the name “yellow scalar”. Its distinctive features are the absence of stripes on the body and the golden color of the scales. This magnificent cichlid is a real decoration of a tropical aquarium, and therefore its popularity does not diminish over the years.

The content of this fish is no different from the content of other breeds of scalar. Among the features, one can single out the need to eat foods with a high content of natural carotenoids in order to maintain the brightness of yellow spots on the body. 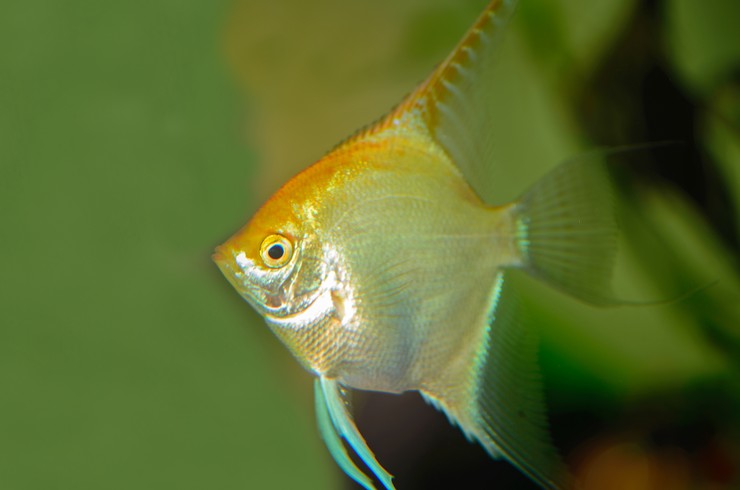 The fish is painted in a silvery-gold color with a mother-of-pearl shine. The macula extends along the upper part of the body from the mouth, along the back, and extends over the dorsal fin. There are no stripes on the body. The rest of the fins are transparent.

The golden scalar is the fruit of the work of breeders, so it will not work to meet such a form in the wild. Such a color would be an excellent bait for predators, and such fish would hardly live long.

The parent form traces its origins to the tropical rivers of South America – the Amazon and Orinoco. Usually, scalars live in small creeks with a sandy bottom and dense thickets of plants. The water here is soft and acidic, which must be taken into account when creating optimal conditions for golden scalars.

Despite the fact that on sale most often you can find young scalars, the size of which does not exceed 5-8 cm, you cannot keep these fish in a confined space. It is optimal for a pair of fish to have 80-100 liters of water. It is desirable that the height of the aquarium be at least 50 cm so that the highly elongated golden scalars look the most impressive. It is best to keep young fish in groups of 6-10 individuals. In the future (if, of course, the volume of the aquarium is not enough for the group), usually 1-2 formed pairs are left.

Any soil suitable for living plants can be used for golden angelfish, for example, sand or pebbles with a diameter of 2-5 mm. Large flat stones and natural driftwood are perfect as decorations. It is imperative to create islands of living vegetation, but do not forget about the place for swimming. Golden angelfish do not dig into the ground or damage the plants, so you can populate the aquarium with any plant species available on the market. 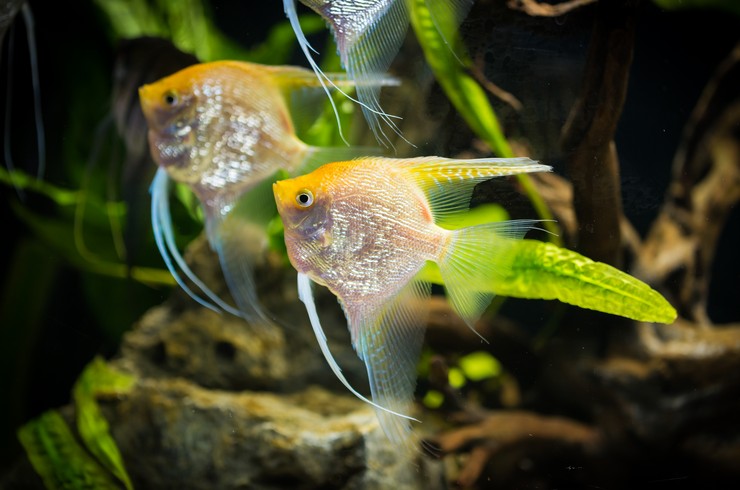 It is important to provide yellow scalars with good filtration and aeration. It is best to opt for an external filter and a powerful compressor. Like their ancestors, golden scalars love warm water, so you can’t do without a thermostat. Lighting should be selected in accordance with the needs of the planted plants, scalars feel good both in bright and dim light.

Once a week, you need to change 20% of the water to fresh. Be sure to use Tetra AquaSafe to remove chlorine and heavy metals from your water that are harmful to your pets. But that’s not all the drug is capable of. It also contains B vitamins, which reduce stress, and natural colloids, which protect the mucous membranes of fish.

Despite the fact that golden scalars are real cichlids, in most cases, they have a calm and peaceful character. Increased aggression can be observed only during the spawning period when it is necessary to drive away uninvited neighbors from your nest. Also, the friendliness of the scalar disappears when kept in cramped conditions.

It is not recommended to keep the scalar together with barbs. It is noted that sometimes these active teasers pluck the fins of the scalars. It is not necessary to add to cichlids and goldfish due to the large differences in conditions of detention. 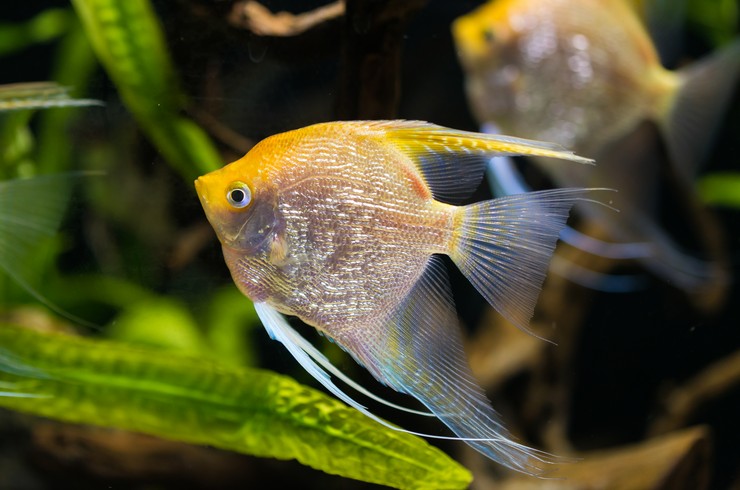 At home, golden scalars quickly become accustomed to eating high-quality dry food in flakes, chips, or granules. It is not recommended to constantly feed the fish with live and frozen food, as they are unbalanced and pose a potential threat of contamination of the aquarium.

Yellow scalars prefer to feed on the surface of the water, less often in the middle layers of the aquarium. Taking these needs into account, the following dry foods are well suited for feeding scalars:

TetraPro Color and Tetra Rubin are complete feeds, enriched with natural carotenoids, which maintain the vibrancy and color of all red, orange, and yellow ornamental fish. The effect of color enhancement is noticeable already from the second week of use;

TetraMin is a universal flake formulation for all tropical fish. It is made from more than 40 types of raw materials and is perfect for the daily nutrition of fish. The flakes stay on the surface for a long time, after which they slowly sink to the bottom;

TetraPro Algae is a high-quality crisp food for all types of tropical fish, produced using gentle low-temperature technology. Possesses increased nutritional value and digestibility. Contains a concentrate of spirulina, which fully satisfies the needs of golden scalars in plant food.

The scalar must be fed several times a day with such a portion of food that will be eaten by the fish in a few minutes. Tetra FreshDelica natural treats will help you to diversify the diet of your pets – these are traditional food organisms (bloodworms, daphnia, brine shrimp, krill) in nutritious jelly that will definitely please the golden angelfish.

Golden scalars are spawning fish, but with a little experience, you can easily get offspring from them at home. For this, first of all, you need to select a couple of manufacturers. Unfortunately, sexual dimorphism in fish is weak. Usually, they wait for the moment while the fish independently form a pair.

The main distinguishing feature in adults is the line of the back and abdomen. In females, it is almost straight, but in males, it makes an angle. Also, females often do not form a fatty bump on the forehead. During spawning, a wide ovipositor can be observed in females. 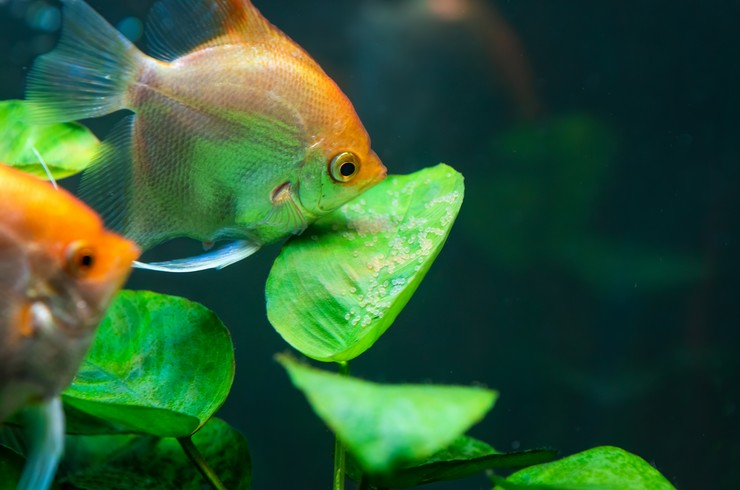 Fish, ready to spawn, choose a flat spot – a leaf of a plant, a rock, or even the wall of an aquarium – and clean it thoroughly. Then the female lays 300-700 eggs, which are fertilized by the male. The golden scalar has a highly developed parental instinct. Both partners fan the eggs with their fins and remove spoiled eggs. The incubation of eggs lasts about 48 hours, after which the larvae are born, which feed on the contents of their yolk sac for the next week, after which they already switch to self-feeding.

Golden scalars become sexually mature at the age of 8-12 months.