Gourami is a popular representative of the Labyrinth Fish group. Their peculiarity is that they are able to use atmospheric air for breathing, for which they periodically float to the surface of the water and swallow a portion of air into a special organ – the labyrinth. Most gourami species are medium-sized fish that are easy to keep. Yes, and gourami reproduces quite easily because fish tend to take care of the offspring. The reproduction process itself is rather unusual and is associated with the construction of a nest from bubbles. But first things first.

Gourami becomes sexually mature at the age of about 8-12 months. Under suitable conditions, female gourami is capable of spawning 4-5 times a day at intervals of 1-2 weeks. After that, the fish should take a break.

Selected breeders should be transplanted into different aquariums and fed abundantly several weeks before spawning. At this time, it is best to prepare a separate spawning tank. It is an aquarium with a volume of 20-30 liters. The water level should not exceed 15 cm. There is no need to use the soil, but it is worth putting a number of shelters for the female on the bottom in case she needs to hide from the excessively annoying courtship of the male. Floating plants such as riccia or hornwort should be launched on the surface. Water is collected in the spawning grounds from the common aquarium. A powerful filter and aeration should not be installed in the aquarium. This can lead to the destruction of the future nest. 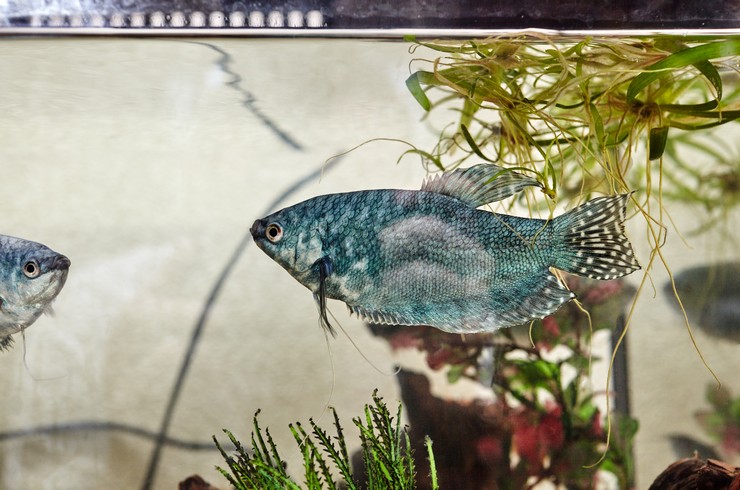 First, the male is placed in the spawning container, and then the female. To stimulate spawning, an increase in temperature to 28-30 ° C and a change of 30% of water to soft (osmotic) water are used. Thus, we imitate the natural conditions in which gourami breed because the spawning period for these fish falls during the rainy season in the tropical zone.

This is followed by one of the most interesting stages in gourami breeding – building a nest. Only the male is involved in this process. Using air bubbles, his own saliva, and pieces of floating plants, he creates a nest on the surface of the water, which can reach a size of 5 cm. Construction is not a quick process, sometimes it takes 2-3 days. Surprisingly, the male is so busy with his work that he may not even pay attention to food. When all the work is completed, the male invites the female to spawn.

The color of the males at this time becomes very bright, they swim, spreading their fins, and by all means try to drive it under the nest, where they “squeeze” eggs out of it. The eggs are very light and float quickly to the surface. The male collects them with his mouth and carefully puts them in the nest. In some cases, the male does not build a nest, and then the eggs remain floating on the surface of the water.

The entire process can take up to four hours. After spawning is over, the female gourami should be removed from the tank so that she is not attacked by the male. The usual fecundity of the female is about 200 eggs, sometimes more. 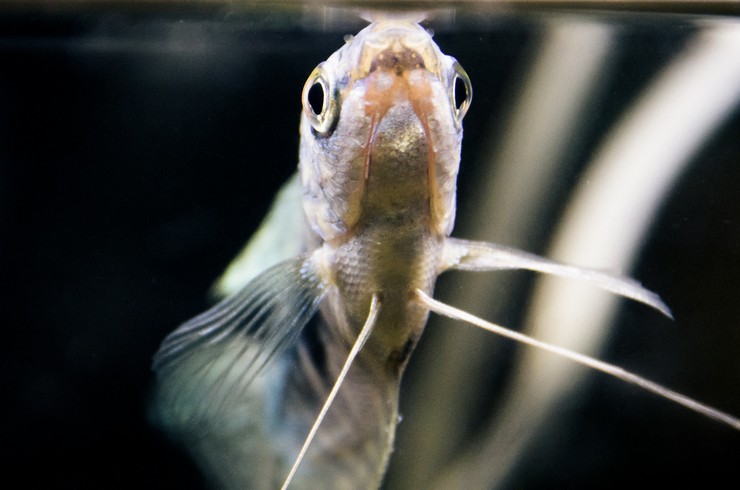 The male takes care of the eggs and in the future the larvae that have appeared. He collects the fallen eggs and puts them back in the nest. It is very important not to bother the newly-made father at this time. Any sudden changes in water parameters or other stresses can lead to the fact that he will quit caring for his offspring, which will soon die.

The incubation of eggs depends on the water temperature in the aquarium and is usually 24-48 hours.

It should be noted that regular spawning of gourami has a positive effect on the health of females. If the caviar remains unperturbed, it can lead to a cyst.

How to tell a female gourami from a male

Reproduction of any fish at home begins, first of all, with the selection of suitable producers. For this, it is important to learn how to correctly distinguish between males and females. Fortunately, in sexually mature gourami this is not difficult, because sexual dimorphism is characteristic of fish. The main sexual characteristic in gourami is the shape of the dorsal fin. In males it has an elongated and pointed shape, in females, it is short and rounded. 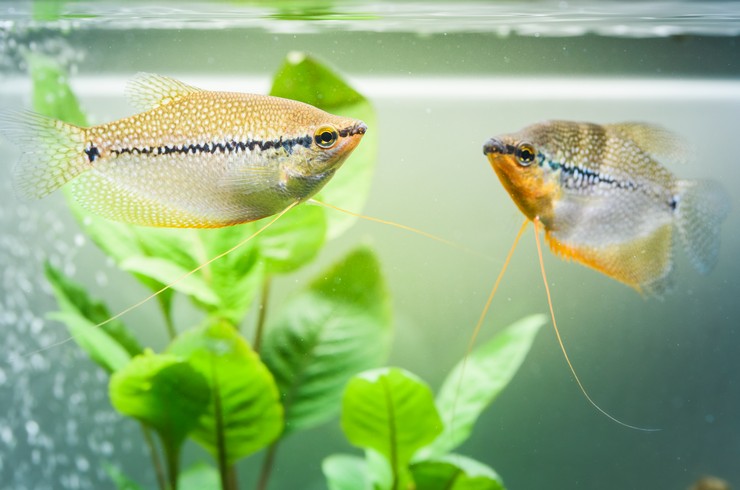 After 1-2 days, gourami larvae emerge from the eggs, distinguished by a well-visible yolk sac. It contains a supply of nutrients for young fish for the next three days, after which the larvae turn into fry and begin to actively swim. The male will try to collect them back into the nest, therefore, when all the fry begins to swim freely, the father should be removed from the spawning grounds so that he does not feast on his own offspring.

Next, you should lower the water level in the aquarium to 6-10 cm. This is due to the fact that the labyrinth organ is formed in fry not from birth, but after 2-3 weeks. When it is ready, the fry rise to the surface and takes their first breath of atmospheric air. Until the maze is formed, light aeration should be organized in the spawning aquarium.

Sharp jumps in water parameters in the spawning grounds, including temperature, should not be allowed – this is destructive for little gourami.

The starting food for fry is usually ciliates and small zooplankton. But as you grow, it’s best to switch to quality dry food for fry, such as TetraMin Baby. He will be able to provide adequate nutrition for your fry, as well as a full range of essential vitamins. They feed the fish in small portions, but often – up to 4-6 times a day. Uneaten food debris should be removed from the aquarium.