Gourami dwarf is perfect for nano-aquariums, which are popular in our time because its size does not exceed 4 cm. And even if the color of the fish is not very bright, it is a pleasure to watch them. And dwarf gourami is also famous for their unpretentiousness because in nature they can survive even in drainage ditches.

The dwarf gourami (Trichopsis pumila) is the smallest labyrinth fish from the Macropod family. It first appeared in amateur aquariums at the beginning of the 20th century, and half a century later, in 1954, it was brought to our country. 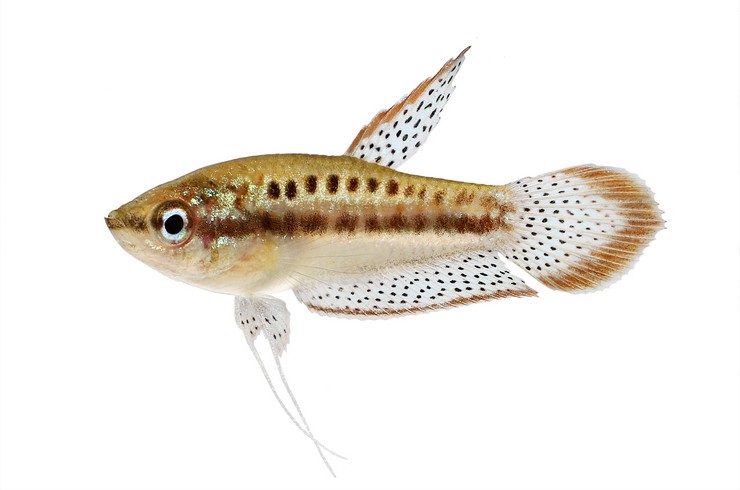 Relative to their close relatives (marble and golden gourami), they are much less common in aquariums, primarily because the fish does not have an outstanding body color. However, it is not devoid of its charm. At the same time, the dwarf gourami is hardy, easy to maintain, and breed.

Like other representatives of the group, it has an additional respiratory organ – a labyrinth, thanks to which the fish is able to swallow and use air above the water surface.

In terms of the general structure of the body, the fish looks more like a cockerel, but with less developed fins: the body is not as tall as that of the closest relatives.

The head is pointed, with large eyes that shine red and blue. The pelvic and pectoral fins are transparent, all others with a lot of blue spots and red edging.

The pelvic fins have been modified into thin filaments that act as organs of touch.

The body of the fish is colored bluish-green; from head to tail, two dark stripes are clearly distinguishable: one is almost whole, the other is from separate spots. 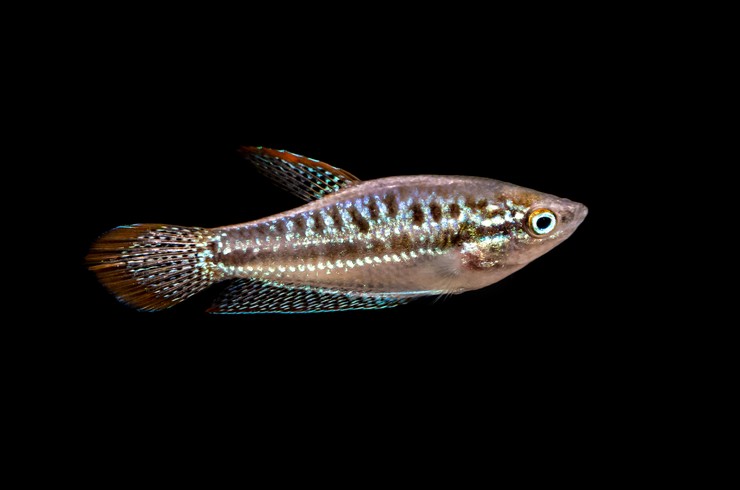 The fish is called dwarf for a reason, its usual size is 3-4 cm.

The dwarf gourami is widespread in the water bodies of the countries of Southeast Asia: Vietnam, Laos, Cambodia, Thailand, Peninsular Malaysia, and the Sunda Islands.

It can be found in slow-flowing rivers, small ponds, densely overgrown with aquatic vegetation, rice fields, and even in ditches. The water in such reservoirs is usually cloudy and poor in oxygen. Here the labyrinth organ and sensitive fins-strings come to the rescue. 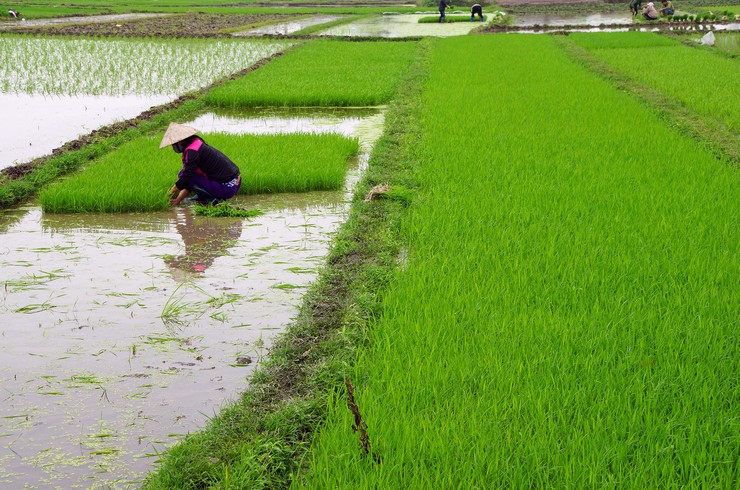 Dwarf gourami is rather shy fish, so they must be kept in pairs or in small groups of 6-8 pieces with a predominance of females. For such a number of fish, an aquarium of 40 liters or more will be enough. It should be equipped with a cover so that the temperature of the water and the air gap above it does not differ significantly. This is due to the fact that ingestion of supercooled air can lead to gourami diseases. 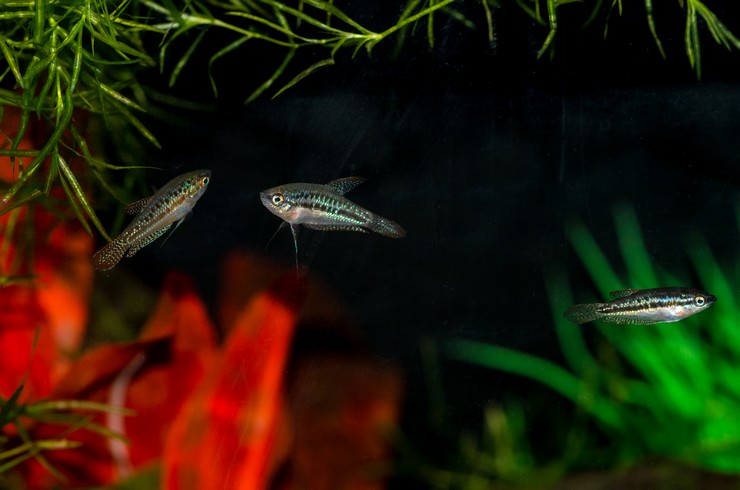 Any substrate can be used as a substrate, but it is desirable that it is suitable for growing live plants, which need to be planted more along the walls in an aquarium with gourami. For flocking, you will also need a variety of shelters: driftwood, ceramic pots, hollow tubes. Weaker individuals can hide in them, if necessary.

The aquarium should be equipped with a filter that does not create strong currents. Lighting can be used bright, but diffused. This can be achieved with floating plants (duckweed, riccia). However, they must be limited to floating circuits so that there is free space for air to swallow. The fish is thermophilic, so a thermostat is needed to maintain a comfortable temperature.

Water changes should be done once a week – 25-30% of the volume of the aquarium.

Given the increased fearfulness of dwarf gourami, a species aquarium is best suited for keeping them. And if there is a need for cohabitation, then it is better to dwell on species that are distinguished by a calm temperament and small size. Suitable neighbors are pearl and honey gourami, lalius, rasbora, iris, micro grass, neons, and other small tetras.

Keeping large and aggressive species is also excluded. You should not plant dwarf gourami with active barbs, which can easily pluck their antennae-fins, and cockerels: fighting fish can mistake them for relatives and start attacking.

For dwarf gourami, small feeds that can fit in their miniature mouth are best suited. It is recommended to opt for high-quality dry food, which will be fully balanced, enriched with useful additives, and completely eliminate the risk of contaminating the aquarium with dangerous infections:

To breed dwarf gourami, you need an aquarium of 15 liters or more. The water level in it is set at 10-15 cm. In the spawning grounds, it is necessary to plant plants with wide leaves, because it is under them (and not on the surface) that the male will make his nest.

Sexual dimorphism is weak; males are usually brighter and have longer fins. Two weeks before spawning, the producers are seated separately and heavily fed, after which the couple is placed in a spawning aquarium and the temperature is raised to 26-30 ° C. The temperature should be constant and not change dramatically – this is the key to the survival of the fry.

After building a nest from foam and saliva, the male begins courting the female. Mating dances are similar to “hugs”, while the male squeezes eggs from the female and fertilizes her. It is worth noting that the eggs are collected in a special egg bag of 4-6 pieces, which the male has to tear apart to place their nest. Eggs are white-yellow in color and their average number per spawning is on average 150 pieces.

After spawning, the female is removed, and the male remains to guard the nest. Incubation lasts about 3 days, after which the larvae are born. The father takes care of them for the first 2-3 days, but then he is able to eat, so he, like the female, is removed. The fry is tiny, barely 1.5 mm in size.

Sexual maturity occurs at the age of 6-9 months.