In densely overgrown stagnant bodies of water in India, Bangladesh, and Nepal, you can find a small silver fish with a yellowish tint and a light brown stripe along the entire body. It is called Gourami honey (Colisa chuna or Trichogaster chuna) and refers to labyrinth fish.

The main feature of this group of fish is the presence of a special organ – the labyrinth, which allows the gourami honey to capture and use the atmospheric air for breathing. In the process of evolution, the pectoral fins of the fish have evolved into long thin threads that are used as an organ of touch. Thanks to these adaptations, honey gourami are able to survive even in muddy, shallow water bodies, poor in oxygen. Initially, the fish was attributed to the genus Colisa, although now some scientists attribute it to the genus Trichogaster. Very often honey gourami is confused with the golden form of marble gourami (golden gourami). 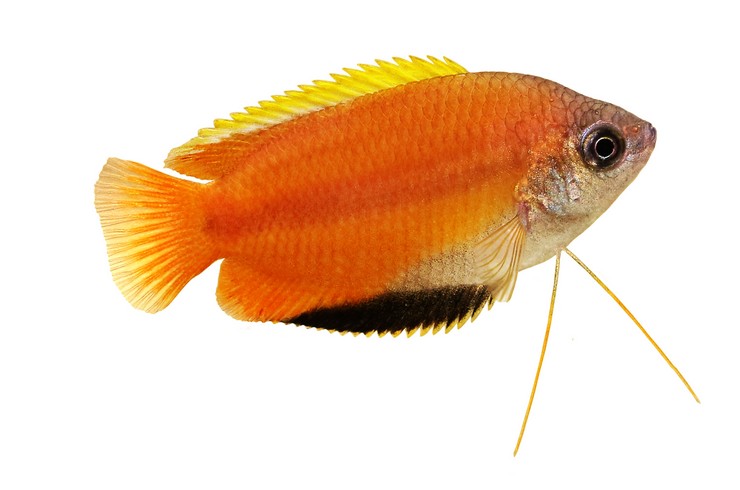 Aquarium forms of gourami honey have a much richer body color than their natural counterparts. Derived a large number of color variations based on reds and golds. The average size of fish in an aquarium is 5 cm, females are slightly larger than males. The body of the honey gourami is slightly flattened from the sides, the dorsal and pelvic fins are pointed (in males) or have rounded ends (in females). The pectoral fins are filiform. The mouth is small, extended upward. A characteristic light brown stripe runs along the entire body from the eyes to the tail.

You can keep gourami honey alone, in pairs, or in small groups. For a couple of fish, an aquarium with a volume of 40 liters or more will be enough. It is necessary to install a filter in it, but not create a strong current. Aeration is not required for gourami honey, but it may be necessary for neighboring fish and for the proper functioning of the nitrogen cycle. It is important not to allow a strong drop in temperature above the water surface, because after swallowing a portion of cold air, honey gourami can damage the labyrinth organ. It is better to choose the soil in dark shades, with it the gourami will look much brighter. The fish prefers dim lighting. 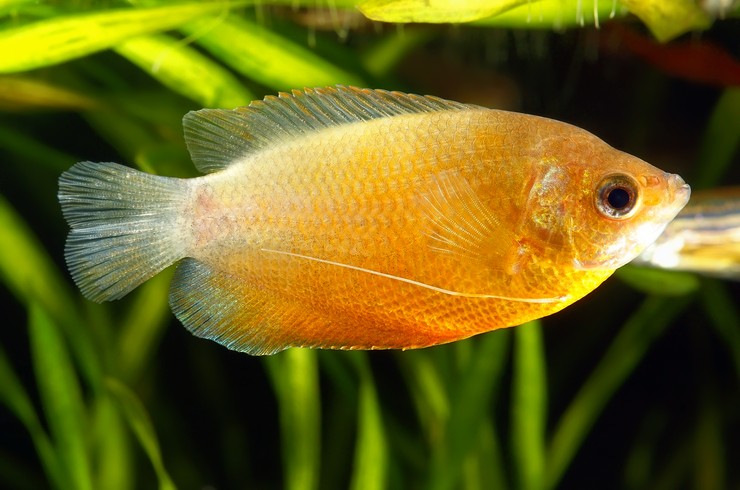 The most important water parameter is temperature, it is desirable that it be within the range of 24-28 ° C. For the content of gourami, water from low to a medium hardness (4-15 ° DH) with a water reaction close to neutral (pH = 6.0-7.5) is suitable. Replace 25% of water weekly.

It is recommended to plant a large number of live plants in the aquarium. It is better to give preference to broad-leaved plants that throw leaves on the surface of the water (for example, nymphaea) because it is under the leaves of such plants that males of honey gourami build a nest for spawning.

Gourami honey is one of the most peaceful fish. It gets along well with most types of calm, non-aggressive species (rasbora, tetras, zebrafish, corridors, etc.). Due to the timid nature of the gourami, you should not pick active fish in the neighbors, this can lead to the fact that the gourami will not get food or their fins will be bitten. It is also not recommended to keep honey gourami with lalius, since due to the great similarity, the males of the latter can mistake the gourami for representatives of their own species and begin to attack.

The basis of the diet of honey gourami in nature is a variety of insects, their larvae, and small planktonic organisms that live in the water column or fall to the surface. There is also a more advanced way of obtaining food: honey gourami is quite successfully able to shoot down insects flying by with a stream of water. 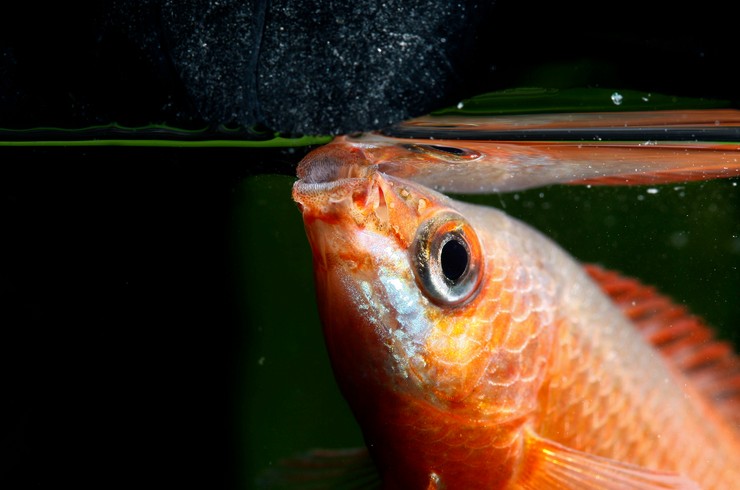 In the aquarium, honey gourami eats any type of food – dry, frozen, and live. It is essential that the food is safe, nutritious, and well absorbed. Tetra offers a wide range of food and treats for all types of tropical fish. Honey gourami usually stays in the upper and middle layers of the aquarium water, so they need food that floats on the surface and gradually sinks down. Also, it should not be very large, because the mouth of the fish is small. A good choice for gourami is complete feeds with natural color enhancers – Tetra Rubin and TetraPro Color.

Tetra Rubin is a complete classic food in the form of flakes or granules with natural color enhancers, which maintains the brightness and color of all red, orange, and yellow ornamental fish. The effect of the application is noticeable already from the second week of application.

TetraPro Color is a modern, innovative food in the form of chips, prepared using gentle low-temperature technology, which allows you to maintain increased nutritional value and stability of vitamins. Chips contain a special color concentrate to enhance the natural color of the fish. Due to the high digestibility of feed, water pollution by fish waste is reduced.

It is necessary to feed honey gourami several times a day in small portions, which will be eaten by fish in a few minutes.

Breeding gourami honey is not much different from breeding other types of gourami. Sex differences were discussed above. An interesting fact: the first researcher of the honey gourami Francis Hamilton, due to differences in color, initially attributed males and females to different species.

Both pair spawning and group spawning are possible, but in the first case, the probability of getting offspring is higher. A capacity of 40-50 liters with a water level of 15-20 cm is suitable as a spawning aquarium. Unlike other species, the male honey gourami does not use plant particles when building a nest. To increase its strength, he tries to arrange a place for eggs under the wide leaves of floating plants. The nymphaea is very well suited for this purpose.

A few weeks before spawning, the selected pair is actively fed with high-protein food, after which they are planted in a spawning aquarium, where the water temperature is raised to 27-29 ° C. Here the male builds a large nest and invites the female to him. At one time, the female spits out about 20 eggs, which the male immediately puts into the nest. In total, the number of eggs during spawning reaches 200 pieces. After the female has laid all the eggs, it is recommended to remove it: despite the fact that the males of the honey gourami are quite loyal to their females, the latter can distract the “fathers” from caring for the nest.

The first fry appears in 24-36 hours. At this point, the male must be removed from the aquarium. Gourami fry switch to self-feeding after 3 days. The first food is ciliates, and two weeks later – Artemia nauplii. The fish grow very unevenly, so it is necessary to regularly sort the gourami by size, otherwise only the fastest and most active ones will remain in the aquarium.

Young honey gourami does not have a bright color, only two stripes stretch along the whole body: gold and dark. The maximum staining occurs at the age of six months.