Havana cats have a rather exotic name, high intelligence, and wonderful appearance.

These feline pets are the result of a hybridization between a Siamese and a common domestic dark cat. It is quite easy to distinguish this genus of cats: they have a pale brown color, a narrow muzzle like that of an oriental breed.

Few will guess, but the birthplace of this breed is Great Britain. The first information about the Havana cat dates back to the 1800s.

They began to breed such cats quite recently – in the 50s of the last century.

In addition to these cats, the Slavic blue cat was also added to this mixture. It is currently impossible to find genes of the Slavic cat in the DNA of Havana.

The Havana breed was officially registered in 1958.

Some of the individuals were taken to the United States for breeding. Pets with British ancestry began to be bred with alternative breeds, as genetic problems began. As a result, animals of different gamut were obtained and began to be called oriental chestnut. 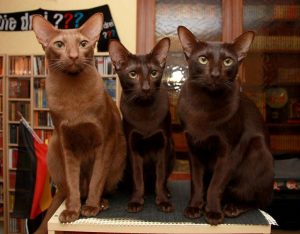 In 1958, when the breed was registered, some of the cats were taken to the United States for breeding. Due to genetic problems, the English line of cats began to be diluted with other breeds. As a result, the animals were of different shades and they began to be called oriental chestnut.

And American breeders bred exclusively brown cats. It was this breed that was called “Havana” – either because the color is similar to the color of the Havana cigar, or because of the similarity with the hair of the Havana breed rabbit.

Cats and especially kittens are very mobile, cheerful, and treat their owner with great love. Like all oriental cats, Havana is very intelligent, empathetic, and emotional. Often meows and loves games with human participation in the gameplay.

Havana’s affection for the owners is so strong that sometimes it becomes quite problematic: they tolerate separation from people and prolonged loneliness so hard that they can get sick from this. If you have such a job that you often have to leave the house, it either does not start Havana at all, or it certainly needs a companion. Speaking of the companies at home – Havana is a wonderful friend and gets along with other animals. If a cheerful companion appears in her games, the pet will be immensely happy about it.

If you are not ready to get along with an active cat, which is constantly doing something, in a hurry, then the Havana breed is not for you.

Pets are full of energy and love to be the center of attention. They tend to show off all the time, gain approval and affection. They get along well with children and may even take care of them because they understand how to take care of a child.

There is one reliable pattern: the more love, attention, and affection these cats receive from their beloved owners, the less they are capricious in the house. As the saying goes, the degree of damage from feline entertainment is inversely proportional to the time allotted to the cat.