The Havana Bichon, also known as the Havana Lapdog or Havanese, is an ornamental breed of dog with long, beautiful hair. A small dog has all the qualities of a companion, it is playful, friendly, very funny, and intelligent, it can play with a child for a long time or relax on the couch next to its beloved owner. The homeland of Havanese is Cuba. 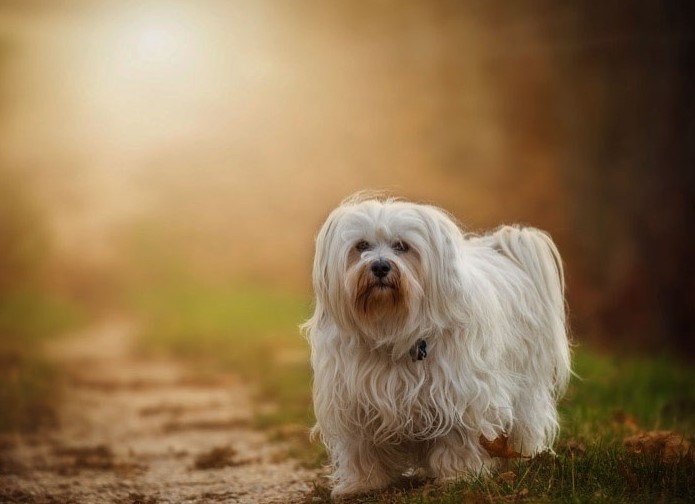 Columbus discovered Cuba for Spain in 1492, from which time began the history of the Havanese, or rather, his direct ancestors. Spanish settlers began to arrive on the island and with them their little companion dogs, Lapdogs, and Poodles. Later, due to trade restrictions that were imposed on Cuba by Spain, local dogs began to develop in isolation, so a certain type was formed. Historians suggest that the direct ancestors of the Havanese were two long-extinct breeds: Blanquito de la Habana and Bichon Tenerife.

In the early 19th century, Havanese were especially popular with the Cuban nobility. European travelers, fascinated by small dogs, brought them back to England, France, and Spain. The breed has become fashionable and famous in Europe. Her admirers included Queen Victoria and Charles Dickens. Havanese was soon forgotten. In Europe, they dissolved among other breeds, and the Cubans had no time for decorative animals because of the constant revolutions and upheavals. At some point, the dogs practically died out. With the beginning of another revolution and political repression in 1959, many Cubans began to travel to the United States, among them were Bichon lovers who took the dogs with them.

The revival of the breed began in 1970 in America with literally 11 dogs, which were found throughout the country. They are the ancestors of most modern Havanese Bichons. The American Kennel Club recognized the breed in 1996. Later it was registered with the ICF under the name Havanese. 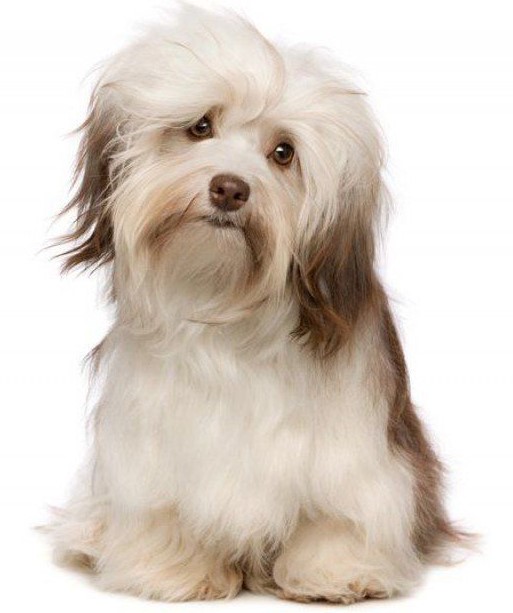 The Havanese is a small, sturdy dog ​​with a long, very thick coat that is soft to the touch. The standard identifies several important proportions:

Height at withers – 21-29 cm, weight – 3-6 kg. The head is of medium length. The skull is broad, flat, with slight roundness. The forehead is slightly raised. The stop is moderately pronounced. The nose is black. The muzzle tapers slightly but is not narrowed or blunt. The lips are dry, thin, and fit well to the jaws. The bite is correct, scissor bite. The absence of 1 and 3 premolars are allowed. The eyes are large and expressive, almond-shaped, dark in color. The eyelids are dark brown or black. The ears are set high, fall along the cheekbones, and form a small fold that raises the auricle.

The neck is of medium length. The back is straight. The topline is slightly curved over the loin. The croup is markedly sloping. The belly is well tucked up. The tail is set high and carried over the back. The forelegs are straight, parallel, lean with strong bones, slightly shorter than the hindquarters, therefore, when the dog runs, it seems that it is jumping. Paws are elongated, small with elastic pads. The toes are well tied. Strong nails. The hind legs are strong with moderate angulation. Movements are free and light. The front legs are directed forward with a sweeping free step.

The coat is thick and long. In an adult dog, hair reaches 18 cm in length, straight or slightly wavy, but curly strands are also allowed. Soft to the touch. On the ears, the hair forms a feathering, the tail is very well pubescent. The undercoat is poorly developed or absent, therefore the molt is poorly expressed. Havanese can be of different colors, the most common colors are pure white, cream, fawn, red, chocolate, beige, gold, silver, black. Various combinations with intermediate shades and spots are possible. 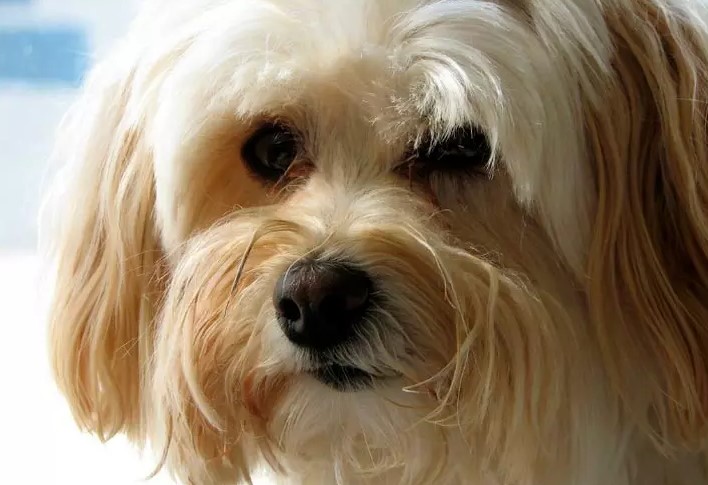 Havanese is affectionate, cheerful, upbeat, and loving. He embodied all the positive features of a decorative dog. He never shows aggression towards people, perfectly feels the mood of the owner, does not bother, and will not bark over trifles. It gets along well with children, but it is more suitable for an older child who will become a companion to the dog in games and pranks, and will not be able to harm inadvertently.

Havanese has earned the nickname “sticky dog” for a reason, he adores owners with all his big heart, is always ready to be there, happy to participate in all household chores, and willingly fulfills any request, so long as he is not forgotten. Behaves very friendly with strangers.

All the little fluffy dog ​​wants is to be close to the owner and give him pleasure. He equally loves everyone around him, be it a cat or a dog, a child or an adult. The Havanese can stay alone at home for some time, in case of prolonged loneliness, the departure of the owners, or lack of attention on their part, it suffers greatly. Havanese is very playful and resourceful, has an extraordinary mind and love of life, constantly comes up with new games that involve others. Friendliness does not prevent him from remaining vigilant and doing the work of a watchman, notifying everyone about the arrival of guests or a postman with a loud bark. 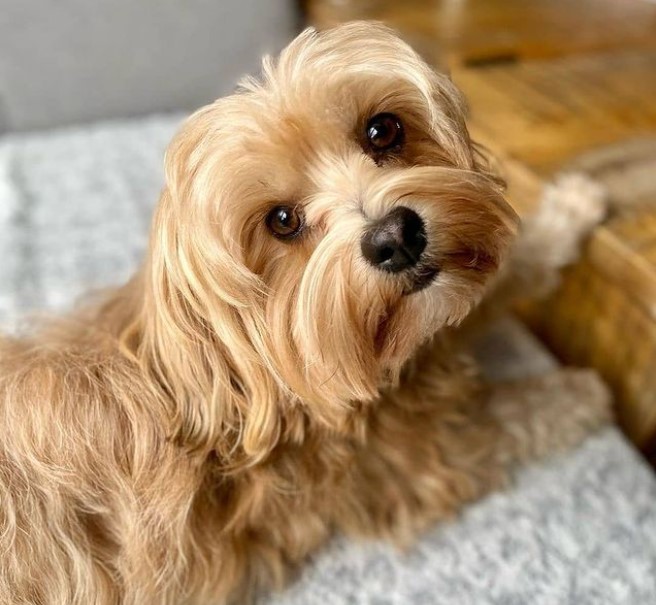 Care for a Havanese is no more difficult than for any other long-haired dog. It is advisable to clean a soft fur coat from 2 to 7 times a week. The frequency depends on the type of coat. Thick, curly hair gets tangled faster than straight or slightly wavy hair. Many owners cut their dogs to make grooming easier. However, this option is not suitable for those who are going to exhibit the Havanese. The frequency of bathing depends on the rate of contamination of the wool and ranges from 1 to 4 times a month. Detergents are selected individually. After water procedures, it is important to make sure that the hair of the Havanese is well dried, you can use a hairdryer, but it is better to let the dog dry on its own.

Particularly noteworthy are the Havanese eyes, which are prone to increase watery eyes. If you do not monitor the dryness and cleanliness of the lacrimal paths, the smallest problem will be their staining in a red-brown color. In white dogs, even with good hygiene, the paths are often stained, and their whiteness can be maintained only by regular use of bleaching agents.

It is recommended to brush your teeth 2-3 times a week. The procedure will help remove unpleasant odor from the mouth and prevent gum and dental diseases. 1-2 times a month, the claws are slightly trimmed, if they are not ground naturally during walks. 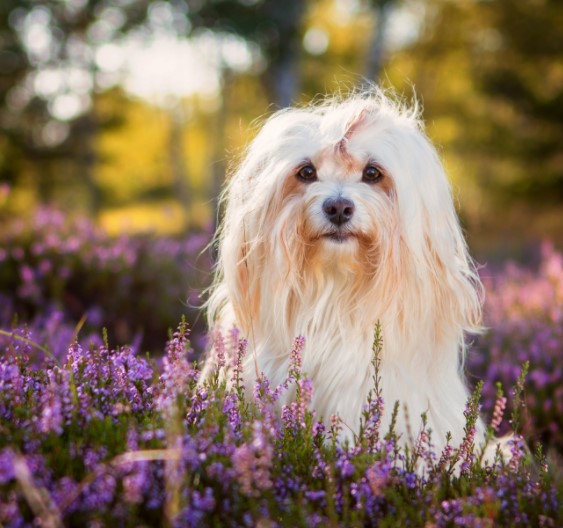 Most Havanese are robust, healthy dogs. Life expectancy is 14-16 years. However, a number of hereditary diseases are noted in the breed, which occurs with varying frequency: