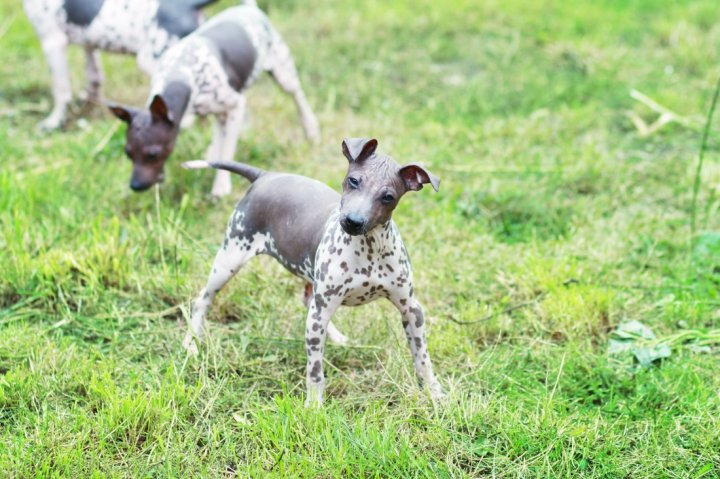 The American Hairless Terrier is a completely hairless dog. Was bred in the USA. Temperament: playful, intelligent, attentive, energetic, inquisitive, devoted. The first American Hairless Terrier, Josephine, was born in 1972 from a furred American Ret Terrier. Breeder Edwin Scott began to develop the breed by the descendants of Josephine. Despite the fact that Edwin only took Ret-terriers for mating, he always wanted to create a separate breed of hairless dogs. In 1999, the United Kennel Club canine organization recognized the bald Reet Terrier, Scott, and his fellow breeders allowed the Hairless Rat Terrier to be entered as a type of Rat Terrier on the UKC Registry. After the division of hairless Rat-terriers into subspecies, all of them, including their descendants, who had a woolen coat, received a new name – American Hairless Terrier, which was picked up by Edwin Scott. It may seem odd that the coated dog should be classified as a hairless dog, but this was necessary in order to continue to breed Ret terriers until exclusively hairless dogs were born and it was possible to maintain a separate and healthy gene pool.

The body of the American Hairless Terrier is considered proportional when its length (measured from the sternum to the point of the buttock) is slightly greater than the height (measured from the point on the withers to the ground), and the length of the forelegs (from the point on the elbow to the ground) should be even half the height of the dog. The backline should be strong and straight, whether the dog is standing still or moving. The loin is moderately short, muscular, and moderately arched. The croup is slightly sloping. The ribs extend back and are well arched from the back, thus forming a broad and strong back, they are curved downward and inward, thus creating a deep body. The sternum extends to the level of the elbow, or slightly below. When viewed from the front, it will be seen that the ribcage, between the forelegs, is well filled and of moderate width. Seen from the side, the front of the rib cage is slightly oval in shape between the forelegs.