This incredible photo marks the end of the career of matador Alvaro Munera. He fell in remorse in the middle of the battle when he realized that the beast did not want to fight him. In the future, this matador became an avid opponent of bullfighting. 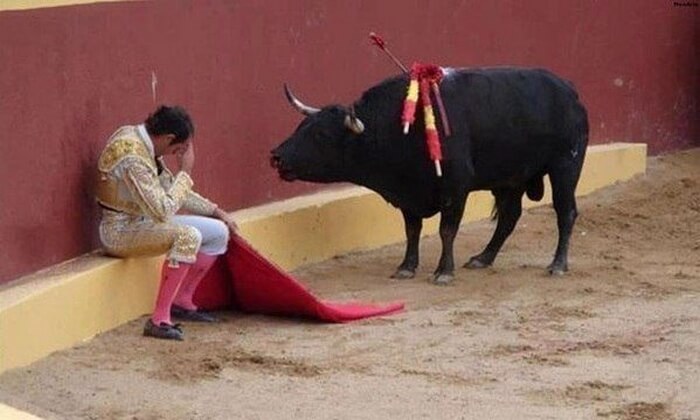 “And suddenly, I looked at the bull. He stood in front of me and looked at me. He just stood and watched, not dividing the attempts to attack me. He is innocence itself, such that all animals have in their eyes, and he looked at me with a plea for help. It was like a cry for justice and somewhere deep inside me I realized that he was addressing me the way we address God in prayer – I don’t want to fight you, please spare me, because I didn’t do anything bad to you. … Kill me if you want, you will, but I don’t want to fight you. And I, reading it in his eyes, felt like the worst shit on earth and interrupted the fight. After that, I became a vegetarian and started fighting bullfighting. “