Moving with a cat is very stressful – especially for the cat. If you and your kitten move out of your old apartment or house, you should avoid unnecessary stress. A well-planned move will soon help her feel comfortable in the new, unfamiliar environment. This applies to indoor cats as well as to outdoor cats. Pettime gives tips and tricks.

Contents hide
1 Cat Stressed After Moving
1.1 Adrenaline
1.2 Aldosterone
1.3 Norepinephrine
1.4 Cortisol
2 How to Prepare a Cat for a Move
2.1 Avoid new acquisitions
2.2 Get your cat used to a separate room
2.3 Practice transportation
3 The Day of the Move: the Cat is Moving
4 Get Your Cat Used to New Homes
5 Cat Behavior after Moving
5.1 Cat hides after moving
5.2 Cat reacts excitedly and aggressively after moving
5.3 Cat scratches furniture and walls in a new apartment
5.4 Cat is dirty

While some cats seem to cope with moving with links, others find it a huge burden. Cats love the familiar. Unexpected changes and strangers can make them afraid and upset. This can lead to behavior problems and illnesses. This is because of the hormones secreted by the adrenal cortex – primarily adrenaline, aldosterone, noradrenaline, and cortisol.

In extreme situations, adrenaline ensures that energy is available for quick reactions. The cat seems to be energized and the adrenaline also increases the preparedness. If moving is associated with excitement, it can take a few days for the hormone in the blood to break down and the cat to behave normally again.

You may know the aldosterone from important, upcoming appointments when you have to go to the bathroom all the time. This hormone increases blood pressure and affects the metabolism of the kidney. Your cat will urinate and defecate more frequently. Diarrhea can also develop. Therefore, make sure that your cat has free access to its litter box at all times and be lenient if something goes wrong.

By constricting blood vessels, norepinephrine increases the rise in blood pressure and increases the heart rate. It is related to adrenaline and, like this, increases attention, concentration, and willingness to act.

The release of cortisol inhibits the immune system. That’s why many cats get sick after moving. The pathogens could previously be kept in check without any problems. But in an extreme situation, the energy is needed elsewhere and pathogens have easy chances.

How to Prepare a Cat for a Move 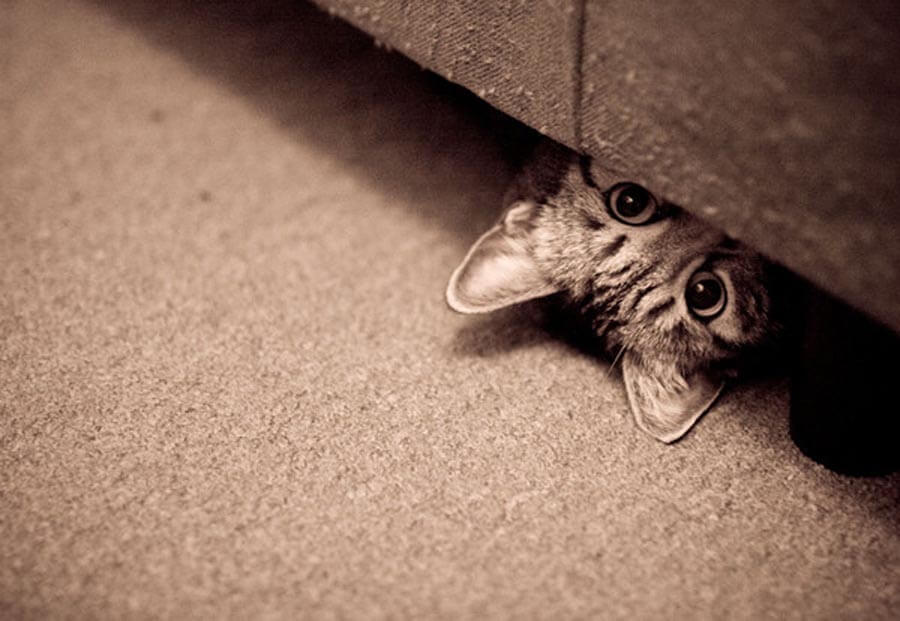 While you are mentally preparing for your move, planning the renovation and furnishing, and packing the moving boxes, your cat doesn’t suspect anything and will be surprised by the sudden move. But it is also possible to prepare a cat for the move.

Moving is a fresh start for most people. On the occasion, old things are sorted out, new things are purchased and many things are washed through again. It’s a horror for cats. They love the familiar, the old furniture that has always been there, and all things that have their familiar smell.

If possible, the familiar moves with and is only gradually replaced after the move. Or the furniture is bought some time before the move. Your cat will settle in much faster with the usual furnishings.

Get your cat used to a separate room

Where should your cat go on the day of the move? The old home is being emptied, the new one is still empty. Many a cat has run away on such a day because the front door was suddenly open.

Safety is paramount. It is safest if your cat is in a separate room that the movers do not enter. Think in advance which room is suitable. Make this tasty for your cat, create a favorite place to lie there, or move your common play ritual into it.

Before the day of the move, make sure that large, heavy pieces of furniture have already left the room. The items that your cat still needs for its wellbeing are allowed to stay, such as food and water bowls, litter boxes, berths, transport boxes, and whatever your cat is familiar with and dear to.

Cats are usually only put in the transport crate when something unpleasant is about to happen, for example, a car trip at the end of which a veterinarian will be waiting for them. It is all the more understandable that cats often run away as soon as they see the transport box. The car journeys are also often accompanied by plaintive singing.

A move is rarely so short-term that there is not enough time to practice. For this purpose, the transport box is open and provided with a cozy blanket in the room in which the cat will be on the day of the move. From this day on, a few special treats will be sprinkled into the box at different times every day. These should arouse the cat’s interest in the box and convince them that the box is not dangerous.

If your velvet paw has lost its fear of the transport box, give the cat the actual training. In marker training, your cat learns that every correct behavior is immediately rewarded, even if it is just looking in the direction of the box at the beginning. Step by step she will try through trial and error to show the behavior you want in order to get her reward. For some cats, it only takes a few minutes, while others require several days of small-step training.

A fun game with the best learning effect can also be made out of it: Send your animal to the transport crate before meals, carry it to the kitchen or to the feeding place and let the cat out of there. The filled food bowl is already waiting there as a reward.

The Day of the Move: the Cat is Moving

Your cat should be the last to move with you whenever possible. It is not a good start if you first have to lock your cat in some small room that is still completely unfamiliar to you because movers are still walking in and out. In the best case, you can open the transport box directly in the new home and your cat can immediately inspect the more or less fully furnished new home.

At the end of the move, put your cat in the transport box, take the cat things with you and drive to the new home in your own car.

Once there, if nothing has already happened, put the last of the cat accessories in their place. Then place the transport box near the litter box and open the door. Your cat can decide for itself when it finds the courage to leave.

Get Your Cat Used to New Homes

The best way to help your cat get used to it is to maintain as many rituals as possible, for example, the same feeding, play, and cuddling times as always.

It is helpful if you have a few days of vacation right after moving to get to know your new home with your cat. A camera with a recording function is also useful. In the new home, there may be completely different conditions that may stand in the way of good acclimatization.

Perhaps there is a nice neighbor across the street with the cat fright ultrasound machine that will stave off your cat’s nerve. Or the cat next door jumps on the windowsill every lunchtime and stares into it with a terrifying look. Unfamiliar or loud noises, which may be recurring, take some cats to settle in. The hormones mentioned above are not even fully metabolized because they are released again. A conversation with neighbors can also provide information about unusual occurrences, to which you can then react accordingly.

Most cats move without any major problems and they get used to it within a short period of time. Sometimes this new beginning also brings new problems with it.

Everything is new to your cat and still a little scary. Be patient and give her time. Sooner or later she will dare to go out again.

Excitement and aggressive behavior can still be the after-effects of the release of stress hormones (adrenaline and noradrenaline). It takes three to seven days for this to break down in the blood and return to normal.

Cat scratches furniture and walls in a new apartment

Scratching objects will keep your cat safe. When scratching, it spreads its smell and turns the new home into a real one, namely your home. By rearranging scratching opportunities and creating new ones, you can control the scratching behavior somewhat.

If your cat does business outside of the toilet and pees in the new apartment, provide her with an additional one or two litter boxes. If the behavior persists, clarify with the vet whether health problems (cystitis, digestive problems, etc.) can be ruled out. If this is not the case, your cat may need further help with settling in. For example, pheromones, a Bach flower mixture specially prepared for your cat, or behavioral advice can help.