If a dog’s nails are too long, the gait adapts accordingly. This favors permanent malpositions. Other health risks are also lurking: some dogs try to shorten the nails themselves with their teeth. There is a risk that the dog will pull out the entire nail in extreme pain. But the “pedicure” is not for beginners. A steady hand is important because mistakes can be made quickly and injuries are the result. What is important to know when caring for nails?

Is It Necessary to Cut the Dog’s Nails? 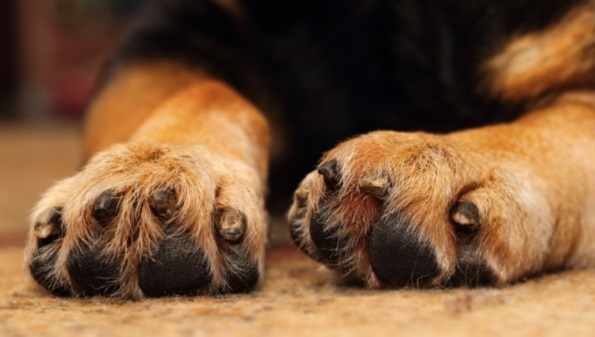 A dog’s nails grow for a lifetime. In some cases, the dog doesn’t need a pedicure. For others, on the other hand, care is part of the routine. The decisive factor is the surface on which the fur nose is out most of the time.

If the dog spends a lot of time outside on the soft ground, for example in meadows and in forests, the claws hardly wear out on their own. In this case, the person has to help. If, on the other hand, the dog walks mainly take place on hard ground, such as asphalt, the claws will be shortened over time. In most cases, it is then not necessary to cut off the nails. But hard surfaces have one disadvantage: long walks are anything but gentle on the joints of your four-legged friend.

Particular attention should be paid to puppies and seniors: Because both of them have shorter walks, the claws grow back too long.

When Should I Cut the Dog’s Nails?

There are clear signs that the owner can tell: My dog’s nails are too long.

How Often Should You Trim a Dog’s Nails?

There is no prescribed period of time for dog nails to be trimmed. In addition to the different surfaces, the pace of growth also varies from fur nose to fur nose. But what has to be done regularly is the control, because: If neglected, a vicious circle begins. The inner workings of the claw are increasingly shifting to the front. So it becomes more and more tricky to cut the claws to the right length.

Cutting Nails at the Vet

The pedicure for dogs can also be left in professional hands by owners. Vets or canine hairdressers cut the dog’s nails. The costs are around $10 – $20. If the dog feels comfortable in a strange environment and remains calm, this is a good solution for everyone involved.

However, many fur noses are tense when they enter the veterinary practice. As soon as they get on the treatment table, some react in a panic or aggressive manner. In these cases, clipping the nails in a familiar environment is more relaxed for the dog.

Checklist for cutting nails in dogs

In principle, the process can be done on your own if the following criteria are met:

What Should You Watch Out For When Shortening the Nails?

The checklist makes it clear: Cutting a dog’s nails is not for the inexperienced. But there are other things to consider:

It is best for a puppy to get used to nail grooming through play. It is important to start in small steps. This means that the caregiver first touches the paws of the little fur nose for a short time. The trick “shake hands” is incorporated later. Then the nail pliers are used. In the beginning, the puppy has the chance to examine the accessories. Next, start cutting in small steps. It is important that the puppy does not have any negative experiences with the nail pliers.

Optimal light is a prerequisite for cutting nails in dogs. If it is too dark, the owner overlooks the life of the claw, which contains blood vessels and nerves. If the owner cuts off too much of the claw, this has serious consequences, because then the dog feels pain and the claw starts to bleed.

Not all nails are created equal. There are dogs with white nails and dogs with black nails. The inner workings of the fur noses with the bright claws are easier to see. In contrast, it is very difficult for dogs with dark nails. Therefore, particular caution is required here. If you shorten the nail in tiny little steps, the risk of injury is significantly reduced.

Wolf’s Nail and the fifth toe

Don’t just check the front nails! The fifth toe, which is on the inside of the front paw, also needs to be checked for length. Not to be forgotten is the wolf’s nail on the hind paws, which some dogs have. Since both claws do not touch the ground, they have no chance of wearing themselves out during the walkers.

Cutting nails in the dog

The correct length of the nails is essential for the dog’s wellbeing. Only when the claws do not press the ground will the fur nose enjoy moving. That is why regular checks are mandatory for every dog owner. Owners can decide whether they want to do the pedicure themselves or ask a professional to do the job. It is important that the “foot care” of the beloved four-legged friend is carried out with the utmost care.