Great Danes are a symbol of nobility, strength, and power. These dogs are real giants in the animal world. Despite its fighting past, today it is one of the kindest dogs among all known breeds. They are considered almost ideal pets that get along well with humans. 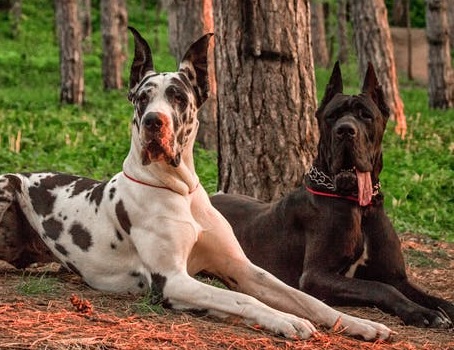 Great Danes are not a very common breed, as they are too large in size. For their maintenance, you need not only enough space, but also the means to ensure a comfortable existence.

The breed has a number of features that distinguish them from other canines:

it has been historically proven that in ancient times Great Danes were used as fighters in gladiatorial battles, and also used in military campaigns, despite this, today they are kind and friendly animals, but not devoid of guard qualities;

respect for pedigree dogs was at a high level, there was even an article in the laws that imposed a huge fine for killing a dog of this breed;

Great Dane is one of the largest dog breeds on earth, several representatives are even listed in the Guinness Book of Records with high growth and weight indicators, significantly exceeding the standard ones;

despite their size, Great Danes get along well in families and get along well with children, they are balanced, friendly, and also obedient, ready to follow the instructions of the owner and be useful to him;

due to the peculiarities of the wool cover, such dogs cannot live on the street or in a cold aviary, they have no undercoat at all, so in the cold season, there is a possibility that the animal will freeze badly.

Like representatives of other large dog breeds, Great Dane also has a short lifespan. 8-10 years is the maximum that is possible. But the years spent together will certainly be filled with love, which the dog is ready to give to its owners.