Whenever it comes to space flights, everyone probably remembers Yu.A. Gagarin – the first conqueror of space. And there is no way to diminish Gagarin’s merits, but for the sake of justice, we should not forget about the first animals that were sent from Earth before humans to explore the vastness of the Universe. We are talking, of course, about the famous Belka and Strelka, as well as their predecessor named Laika, who, unfortunately, was not lucky enough to return to Earth alive.

About the first flights of animals into space

The question of space exploration has worried man since time immemorial. But only in the XX century, when the spacecraft was first designed and created, extra-planetary travel became possible. But it was risky to send a person to surf the Universe right away because there was no confidence that the pilot-cosmonaut would return to Earth safe and sound. Therefore, the responsible mission of flying into space was initially assigned to animals.

First of all, the choice of medical luminaries fell on dogs and monkeys, but in the process of preparing for the first flight, it was determined that they better cope with loads of the dogs, and besides, they are better subject to training (in comparison with monkeys), strong in health and undemanding food.

The experiments were carried out not only on dogs and monkeys. So, other animals were sent into space: a cat (yes, only one, while there are many astronauts), turtles, rodents, lizards and newts, quails, fish, snails, frogs, spiders, grasshoppers, cockroaches and flies, roundworms …

What goals were pursued by scientists who sent animals into space? Among the main tasks were: 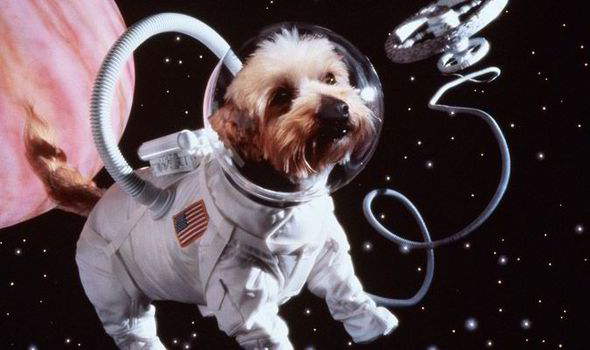 About dogs in space

When asked what were the names of the dogs that flew into space, most of our contemporaries will remember Belka and Strelka, who were sent on an orbital flight around the Earth on August 19, 1960, and returned after 25 hours (i.e., on August 20, 1960). alive and famous. But few people will remember Laika, the dog, whose mission, unfortunately, was not as successful as that of Strelka and Belka. Laika was launched into space in November 1957 (that is, it can be partly stated that the dog’s first flight into space was not in 1960, but 3 years earlier, although it was unsuccessful), but the ventilation system in the spacecraft failed, as a result, which the animal died from overheating.

But even if such a failure had not occurred, Laika had no chance of survival: under no circumstances could the Sputnik-2 ship deliver the animal to Earth safely for technical reasons. Also, the story of the Fox with the Chaika, who died in July 60, at the stage of the launch of the Sputnik-5-1 spacecraft, has sunk into oblivion. These dogs, like Laika, were the predecessors of Strelka and Belka, but fortune, alas, did not smile at them. And how many dogs died at the stage of scientific research!

Belka and Strelka were the first dogs whose mission to space flight ended successfully. The first, but not the only ones. So, already in March of the 61st, there was a flight of the dog Chernushka (she returned safely), and in the same month, the ship with the dog Zvezdochka was launched (and she returned to Earth safe and sound). And in February 1966, the first males who have been in space, whose nicknames are Ugolek and Veterok, received their moment of fame. Their flight lasted a record 22-plus days (!), But both boys survived.

11 interesting facts about Belka and Strelka

The famous flight of dogs into space on August 19, 1960, made a lot of noise not only in the USSR but throughout the world. Let’s consider interesting facts about this significant event: 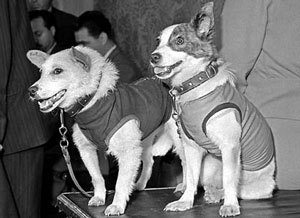