The Japanese Bobtail breed’s tell-tale characteristic is a short “bunny” tail that can be flexible or rigid, with one or more curves, angles, or kinks. 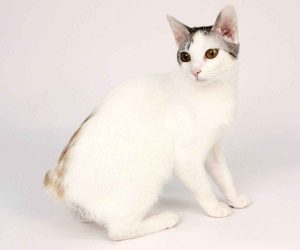 It is said that the first bobtailed cats arrived in Japan as gifts from the emperor of China to the emperor of Japan. They have been known in the island nation for at least 1,000 years. Their short tails were a naturally occurring phenomenon that was then set through selective breeding.

Over the centuries, the cats were not only imperial pets but also guardians of grain supplies and protectors of the lucrative silkworms, both of which were threatened by rodents. Bobtails with a tricolor coat—red and black on a white background—became known as popular symbols of good luck.

This is a medium-size cat weighing 6 to 10 pounds. 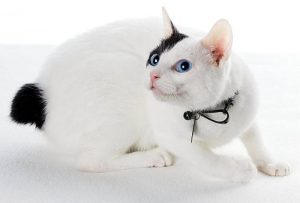 This active and affectionate cat will “talk” to you in a soft, chirpy voice. You will be amazed by the range of his feline vocabulary. He’s not loud at all, but he does have a lot to say and a range of tones in which to say it.

When he’s not telling you about his day or asking about yours, he is very likely carrying around a favorite toy or splashing his paw into your koi pond or aquarium. He likes playing with water, so you may find your faucets turned on or puddles beside his water dish.

The Japanese Bobtail is playful and smart. He will relish the challenge of a rotating assortment of puzzle toys or the fun of chasing a lure on a fishing pole toy. He is very good at learning tricks and will even walk on a leash if he thinks it’s a fun thing to do. When you are sitting down, though, expect this friendly feline to find a place in your lap.

This is an adaptable cat who travels well, making him a good choice for boisterous families or people who enjoy an RV lifestyle. On the downside, he can be headstrong, and it’s difficult to change his mind about which things are okay to do and which ones aren’t. He is a busy cat and must have companionship—people or another Bobtail would be his first choice—but a dog will do in a pinch to keep him entertained when you are out-earning the money for his food and toys. Remember that a bored Bobtail is an amazingly creative Bobtail—and not necessarily in a way that you will appreciate.

Both pedigreed cats and mixed-breed cats have varying incidences of health problems that may be genetic in nature. Japanese Bobtails are generally healthy, and the recessive gene that produces the bobtail is not associated with any spinal or bone abnormalities. Be sure to ask a breeder about the incidence of health problems in her lines and what testing has been done for any that are genetic in nature. 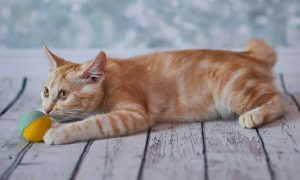 Because the Japanese Bobtail has a little undercoat, both the shorthaired and longhaired varieties are very easy to groom. Tangles are uncommon, and a weekly combing will remove dead hairs. Both longhairs and shorthairs shed seasonally.

The coat is highly water-resistant, so it’s a good thing that a bath is rarely necessary; it takes some doing to get a Japanese Bobtail wet enough to shampoo him.

Always handle the tail gently, especially if it is more rigid than flexible.

Brush the teeth to prevent periodontal disease. Daily dental hygiene is best, but weekly brushing is better than nothing. Trim the nails every couple of weeks. Wipe the corners of the eyes with a soft, damp cloth to remove any discharge. Use a separate area of the cloth for each eye so you don’t run the risk of spreading any infection.

Check the ears weekly. If they look dirty, wipe them out with a cotton ball or soft damp cloth moistened with a 50-50 mixture of cider vinegar and warm water. Avoid using cotton swabs, which can damage the interior of the ear.

It’s a good idea to keep a Japanese Bobtail as an indoor-only cat to protect him from diseases spread by other cats, attacks by dogs or coyotes, and the other dangers that face cats who go outdoors, such as being hit by a car. Japanese Bobtails who go outdoors also run the risk of being stolen by someone who would like to have such a beautiful cat without paying for it.

This breed’s tell-tale characteristic, of course, is a short “bunny” tail that can be flexible or rigid, with one or more curves, angles, or kinks, ideally extending out from the body no more than three inches. The fur fans out to create the look of a pom-pom on short hair, or a blooming chrysanthemum on a longhair. Each cat in the breed has a unique tail.

The Japanese Bobtail is known as well for his tricolor calico pattern—called “mike” meaning three-fur and pronounced “mee-kay”—but other popular colors are black and white or red and white. He also comes in solid colors and tortoiseshell and tabby patterns. Some cat registries permit pointed or sepia-tone coats. Bold, dramatic markings and vividly contrasting colors are a trademark of this breed. The eyes can be any color, including blue or odd-eyed (each eye a different color).

The silky coat can be shorthaired or longhaired. In both lengths, the cats have a little undercoat. Longhaired Bobtails may have a ruff around the neck, long fur on the belly, and fur that is noticeably longer on the tail and upper hind legs (britches) than it is on the upper part of the body. Some have tufts of fur on the ears and toes.

He has a slender but muscular body, long, slender legs that are noticeably longer in the rear, although they are angled in such a way that the body remains level rather than rising toward the rear, and a finely chiseled head with high cheekbones, large oval eyes set at a slant, and large, upright, expressive ears. 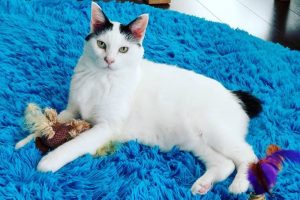 The Bobtail is a great match for families with kids because he shares their high energy levels. He is up for anything, from playing fetch to being a guest at a tea party to being dressed up in doll clothes and paraded around in a baby buggy. Always supervise children to make sure the pet and play with the cat nicely and don’t pull his ears or twist his tail. He is happy to live with cat-friendly dogs, too, thanks to his amiable and fearless disposition. Introduce pets slowly and in controlled circumstances to ensure that they learn to get along together.