Some ornamental fish are valued by aquarists not for their flashy color and spectacular appearance, but for the unusual behavior that can be regularly observed in the aquarium. One of these species is for the first time this fish was described at the beginning of the 19th century, but it was possible to breed it in captivity only in 1950.

The specific epithet “kissing” was given by gourami for an interesting form of behavior. Periodically, two individuals (both males and females) stand opposite each other, swim for a while, and then at one moment for a short moment interlock with their lips. From the outside, it is very much like a kiss. But as more detailed studies have shown, this is not “love” and not a form of sexual behavior, but an attempt to establish one’s social status in the pack.
In nature, gourami kissing is most commonly found in Thailand and Indonesia. Like other labyrinths, it has a special organ that allows you to capture and use atmospheric air for breathing – a labyrinth.

The body of the fish is elongated, compressed from the sides. The fins are transparent; the dorsal and ventral fins begin almost at the same level and end in extensions near the tail. The pectoral fins are quite developed and set low. The eyes are large. Particular attention is drawn to the structure of the oral apparatus. The mouth is framed by large fleshy mobile lips, which have a large number of small teeth on the inside, which allow the fish to eat algal growths. Therefore, the genus is called Helostoma, or “nail”.

As noted above, kissing gourami do not differ in bright body color. In nature, they have a gray-green color of scales and opaque fins with a brown tint. Sometimes there are longitudinal stripes on the sides. In the aquarium, the pink-orange form with transparent fins is more widespread. Sexual dimorphism is not observed in kissing gourami; it becomes possible to distinguish a female from a male-only after the appearance of eggs.

It is best to keep kissing gourami in groups, where there are 2-3 females for one male. The minimum aquarium volume for such a set of fish should be at least 100 liters. As with other labyrinths, the aquarium needs a lid or coverslip, which will prevent, firstly, the air above the water’s surface from getting too cold (which can damage the labyrinth organ), and secondly, it will prevent especially active gourami from jumping out of the aquarium. It is better to choose dark soil, fish with a dull color will look more in contrast with it. It is desirable to have a variety of shelters in the form of driftwood and stones.

Gourami kissing fish are quite hardy, capable of living in a wide range of water parameters. The following are considered optimal: temperature 22-28 ° С, pH = 6.0-8.8, hardness from 5 to 35 dGH. Filtration is desirable, but it is not worth creating a strong current in the aquarium. Regular water changes (30% per week) will prevent nitrogen compounds from accumulating in the aquarium and will have a beneficial effect on the well-being of the fish. Plants in the aquarium are desirable, but hard-leaved species such as anubias are preferred. Indeed, in nature, gourami who kisses do not hesitate to eat living plants and can destroy species with delicate leaves. 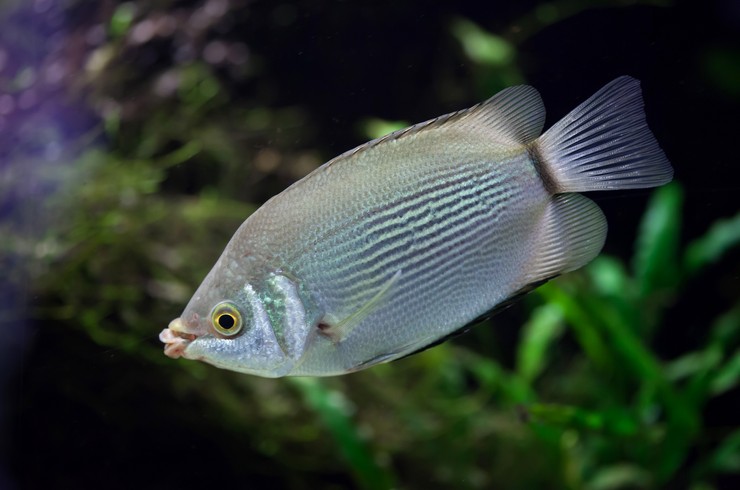 The compatibility of kissing gourami directly depends on the age and individual characteristics of specific fish. It is best to acquire young gourami who have not yet reached puberty. At this age, they are the most peaceful and are suitable for keeping in common aquariums with non-aggressive proportional fish. As they grow older, the character of the gourami deteriorates, they begin to attack small (and often large) neighbors in the aquarium. With an insufficient volume of the aquarium, a small number of plants and shelters, aggressiveness appears more often. You can keep them with your own kind, but do not acquire too many individuals. In a pack, kissing gourami has a very clear hierarchy, and although regular skirmishes rarely result in death from blows, the constant stress of non-dominant individuals weakens them.

Kissing gourami can be called an omnivorous species. Fish are able to consume both plant and animal food. In nature, they feed on insects, aquatic plants, algae, scraping them off stones. Especially noteworthy is the well-developed branchial apparatus with numerous branchial stamens, which allows gourami to filter zooplankton.

When gourami is kept in an aquarium, kissing people can eat any kind of food. But it must be remembered that fish will acquire full growth, development, and strong immunity only when fed with complete high-quality feed. For over 65 years, Tetra has been offering on the market a wide range of dry foods that fully satisfy the nutritional needs of ornamental aquarium fish. When feeding kissing gourami, it is necessary to take into account their omnivorousness, so the following foods can be recommended:

It is worth noting: if algal fouling appears on the walls of the aquarium, it is not recommended to remove them completely during maintenance, as kissing gourami will gladly scrape them off and eat them. They are also happy to destroy the parasites of the aquarium – freshwater hydras. 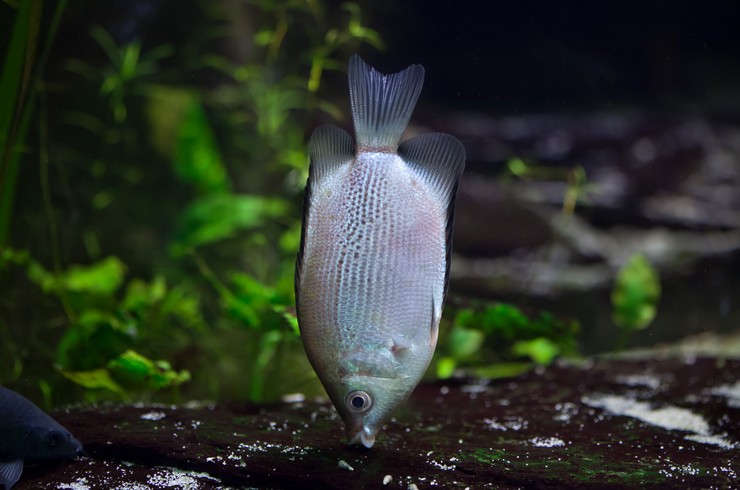 Breeding kissing gourami is slightly different from breeding other gourami species: males do not build nests from foam and do not take care of the offspring. Sexual maturity in fish occurs at the age of 1.5-2 years.

There are no external sex differences in fish, but after the appearance of eggs, the abdomen of the females becomes much fuller, which makes it possible to isolate a pair. The selected male and female should receive an enhanced diet of plant and animal food before spawning.
A breeding aquarium requires a volume of at least 100 liters. Dense vegetation (including floating plants) and a variety of shelters in which the female can hide, is desirable, is not fully ready for spawning. The process can be stimulated by raising the temperature to 27-29 ° C and adding water with a lower level of hardness. A low flow filter can be installed.

When the female is ready for spawning, mating games begin: the male fluffs up his fins and swims around the female, after which he hugs his body and turns his belly upside down. At this moment, the female spawns eggs, the number of which gradually increases during each cycle. In total, the female can spawn several thousand eggs during spawning. Eggs either float to the surface of the water or stick to the leaves of aquatic plants. After the spawning process is complete, the parent pair must be removed from the aquarium, as they may eat fresh caviar.

Egg incubation usually lasts no more than a day. On days 2-5, fry of kissing gourami are able to take starter food – ciliates, rotifers. After a week from the moment of hatching, it is necessary to introduce plant food into the diet. During this period, fry exhibit interesting behavior – they huddle in small flocks and swim in a group. When the labyrinth organ finishes forming, the fish become scattered. As they grow, the fish are transferred to a larger natural or high-quality dry food.