The Komodo Dragon (Varanus komodoensis) is the largest lizard on the face of the Earth today. An ancient species of reptiles, it first appeared on the planet more than 100 million years ago, although it was known to Western science only in 1912. Until now, it was known in the West only for rumors of dragon-like lizards in the Lesser Sunda Islands of the Pacific Ocean. 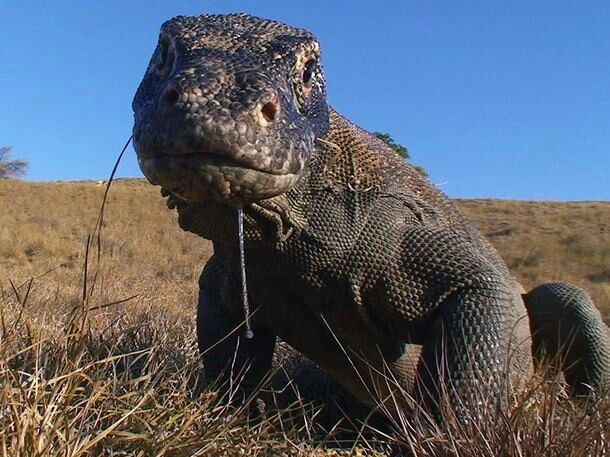 Full-grown Komodo dragons typically grow up to 10 feet and can weigh 150 pounds, although individual specimens can weigh up to 350 pounds. They are dull brown, dark gray, or reddish, while minors are green with yellow and black stripes.

Komodo dragons are massive and powerful in appearance with bowed legs and muscular tails. Their heads are long and flat, and their muzzles are rounded. Their scaly skin is usually combined with sand color and gray, providing good camouflage. In motion, they roll back and forth; at the same time, their yellow tongues push out of their mouths.

Komodo dragon reptiles have the smallest habitat of all large predators: they live on certain small Indonesian islands of the Small Probes group, including Rintu, Padar, Gili Motang and Flores, and Komodo, in habitats from beaches to forests to mountain tops.

These lizards are the tops of the predators of their Indonesian island ecosystems; from time to time they seize live prey, hiding among the vegetation and ambushing their victims, although, as a rule, they prefer to eat already dead animals. (In fact, the gigantic size of the Komodo dragon can be explained by its island ecosystem: like the long-extinct Dodo bird, this lizard has no natural predators.)

Komodo dragons have good eyesight and adequate hearing, but mostly rely on their keen sense of smell to detect potential prey; these lizards are also equipped with long, yellow, deeply forked tongues and sharp teeth, and their rounded muzzles, strong limbs, and muscular tails are also useful when aiming for dinner (not to mention communicating with other genera: When Komodo dragons collide between in the wild, is dominated by the dominant individual, usually the largest male.) Hungry Komodo dragons are known to run at speeds of up to 10 miles per hour, at least for short distances, making them some of the fastest lizards on the planet.

The Komodo dragon’s mating season covers July and August. In September, females dig egg chambers, which lay up to 30 eggs. The mother-to-be covers the eggs with leaves and then lies over the nest to warm the eggs until they hatch, which requires an unusually long period of seven to eight months.

Newborn chicks are vulnerable to predation by birds, mammals, and even adult Komodo dragons; for this reason, young people rush to the trees, where the tree-like way of life provides them with shelter from natural enemies until they become large enough to defend themselves. 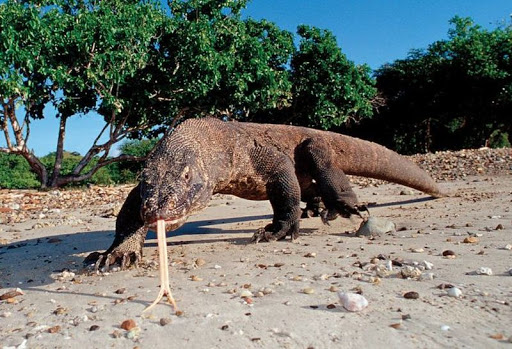 Komodo dragons are listed as Vulnerable. According to the San Diego Zoo website:

There has been controversy over the presence or absence of venom in the Komodo dragon’s saliva. In 2005, researchers in Australia suggested that Komodo dragons (and other observer lizards) had mildly venomous bites that could cause swelling, shooting pain, and blood clotting disorders, at least in human casualties; however, this theory has not yet been generally accepted. It is also possible that the saliva of Komodo dragons transmits harmful bacteria that multiply on rotting pieces of meat wedged between the teeth of this reptile. However, this would not make the Komodo dragon anything special; There has been speculation for decades about the “septic bites” caused by carnivorous dinosaurs!