The monitor lizard lives on several small islands in Indonesia. Initially, the range of the monitor lizards was much wider, but the ancient dragon hunters had knocked down their population quite well.

Komodo is one of the 17,508 islands that are part of Indonesia. The main attraction of the island is the famous Komodo dragon, after which, in fact, this island was named.

Komodo area – 390 km². The population is about 2 thousand people. The residents of Komodo are descendants of former prisoners who were exiled to the island as punishment. Also in their veins flows the blood of the Bugians – one of the largest ethnic groups in Indonesia. The population is Muslim, although there are Christian and Hindu communities.

The entire territory of the island is Komodo National Park. In addition, the island is a popular diving destination. Most tourists from Bali come to Komodo to see the Komodo monitor lizards and the unique underwater fauna of the island.

Also on Komodo, there is a beach with pink sand – one of the seven “pink beaches” in the world. The pink color of the sand is due to foraminifera – the simplest single-celled organisms.

The History of the Komodo Dragon

Tales of a strange animal on an unnamed island have been retold by the inhabitants of the Indonesian islands since time immemorial. But no one dared to go to the island to check the reality of these stories. In 1910, Dutch sailors reported that strange animals actually live on the Lesser Sunda Islands, reaching 7 meters in length and capable of spewing fire from their mouths.

Listening to these stories, Lieutenant Steyn van Hensbroek, a spokesman for the Dutch colonial administration, planned to visit the strange island. He went with an armed detachment of people who were to hunt down a mysterious animal and shoot him. After a few days on the island, the soldiers found one monitor lizard and shot him down. Lieutenant Hensbroek delivered the animal’s carcass to headquarters on Flores Island.

The killed monitor lizard was 2 meters tall and looked like a huge lizard. The truth of the story that the dragon is able to spew fire and fly had nothing to do with reality. Before people, there was a real animal, hitherto unknown. 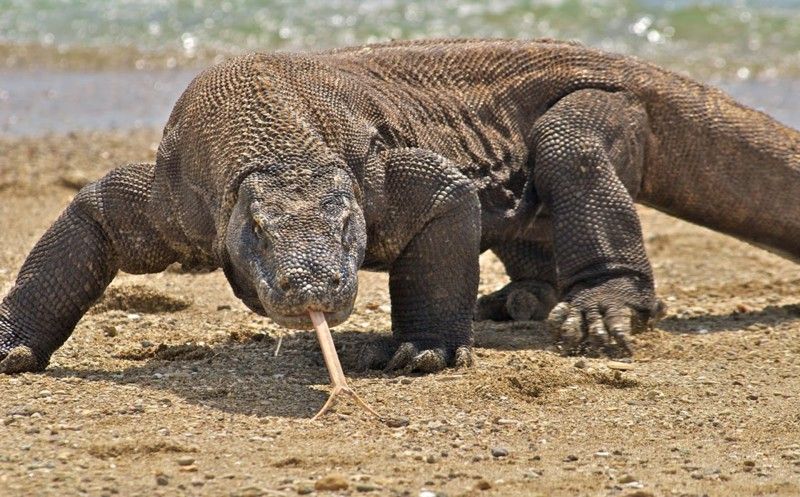 The first scientist who examined the monitor lizard in detail was the director of the Zoological Museum and Botanical Garden in Bogor (Java island) Peter A. Ouwens. Owens’ notes and photographs of the dragon are the first reliable documents detailing what is today known as the Komodo dragon.

The scientist tried to get as much information as possible about this animal, so he hired hunters, who were instructed to deliver several more animals, preferably alive. The hunters brought 2 more dead dragons to Owens (both more than 3 meters in length). The hunters were also lucky enough to catch two live small monitor lizards, each less than 1 m in size. After a detailed study of the monitor lizards, the scientist named them Varanus komodoensis and published the results of his research in 1912.