African Lake Malawi is famous for its huge variety of cichlids. This reservoir, which has a tectonic origin and was in a certain isolation, became a large center of speciation of fish from the Tsikhlov family. The most popular among them were residents of rocky areas – this is the so-called group “Mbuna”, but representatives of the second group – “Utaka” are much less common, although these fish are also not deprived of beauty and intelligence. In our article, we will tell you about one of the representatives of the free-swimming Malawians – Kopadichromis Kadango.

Copadichromis Kadango (Copadichromis borleyi “Kadango”) is a freshwater ray-finned fish from the Tsichlov family. A typical representative of the “Utaka” group, that is, fish that live mainly in open water. A relatively young species in the aquarium hobby that was scientifically described in 1960.

Under natural conditions, copadichromis are kept in large shoals, in which sometimes up to a thousand individuals can be counted. The fish feed mainly on zooplankton. Their upper jaw is able to protrude strongly, while the gill covers remain closed. As a result, a low-pressure area forms in the oral cavity, where water with plankton rushes. 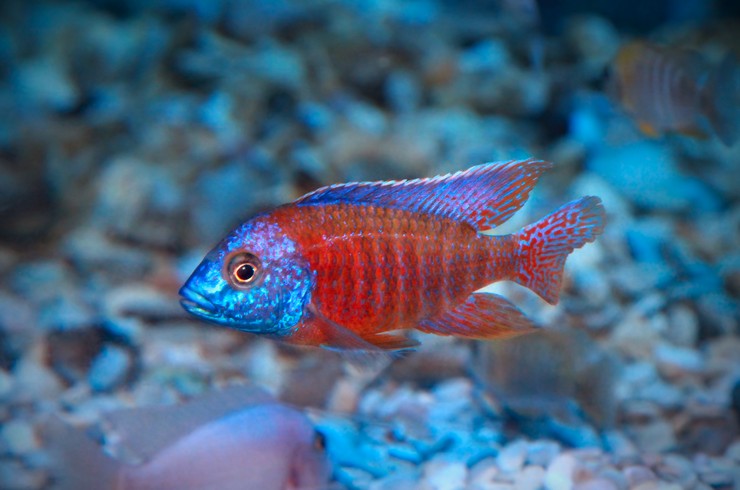 There are several color morphs of this species. Kavango is the name of a village on the southern coast of the lake where this species was first caught.

Kopadichromis Kadango is a relatively peaceful cichlid that shows aggression only during the spawning season.

The body shape of the Kadango copadichromis is typical for most Malawian cichlids: elongated, with smooth curved lines. Under suitable conditions, fish can grow up to 20 cm, although usually slightly smaller. Females are more modest in size than males. The head is large, with large eyes. The mouth is wide, which allows large amounts of water to be swallowed. 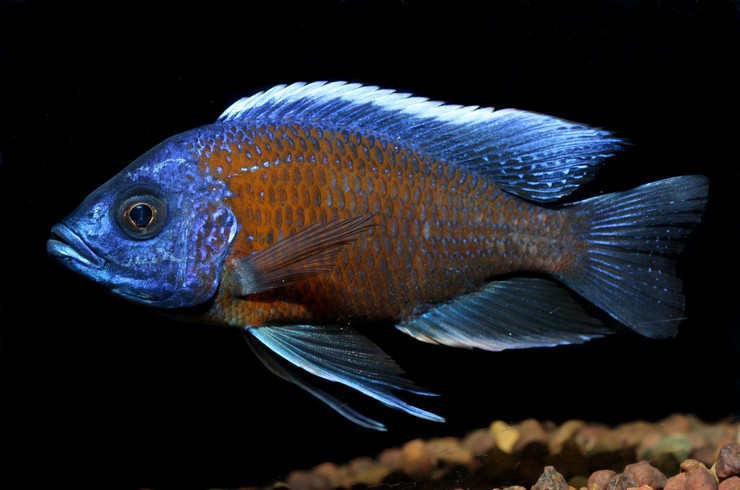 Body-color depends on the specific subspecies. The head of the copadichromis is colored blue, and the rest of the body can be golden, orange, or red. It is the latter form that is most prevalent among aquarists. On the sides of the body, white dots are well manifested, forming clear longitudinal rows. The fins are blue.

Females look more modest. They are silver or gray, which makes them easy to identify.

Life expectancy in an aquarium is about 10 years.

Kopadichromis Kadango is endemic to the African Lake Malawi, located near the borders of the country of the same name. The species is ubiquitous in all parts of the lake, either in open water or near large boulders. Most often, fish are found at depths of 5 to 20 m.

They lead a gregarious lifestyle, often swim with groups of other fish.

To keep the copadichromis Kadango, you need a spacious aquarium with a volume of 300 liters or more. Fish are quite territorial, although to a lesser extent than the popular Mbuna. The aquarium must be equipped with a lid so that the fish cannot jump out. It is recommended to keep them in harems: there should be two or three females for one male.

The design of the aquarium is often quite austere: sandy soil at the bottom and compositions of natural stones. Planting live plants, in most cases, is useless, the fish will most likely destroy them. Although some hard-leaved species (anubias) and mosses withstand the onslaught of cichlids. Volumetric backgrounds with imitation of underwater rocks look good in the background.

It is important to ensure high-quality filtration in an aquarium with copadichromis, for which a productive external filter should be installed. You will also need a powerful compressor and a thermostat that will maintain an optimal temperature regime. It is worth noting that the water in Lake Malawi is characterized by high levels of hardness, therefore, these fish cannot be kept in soft and acidic water. 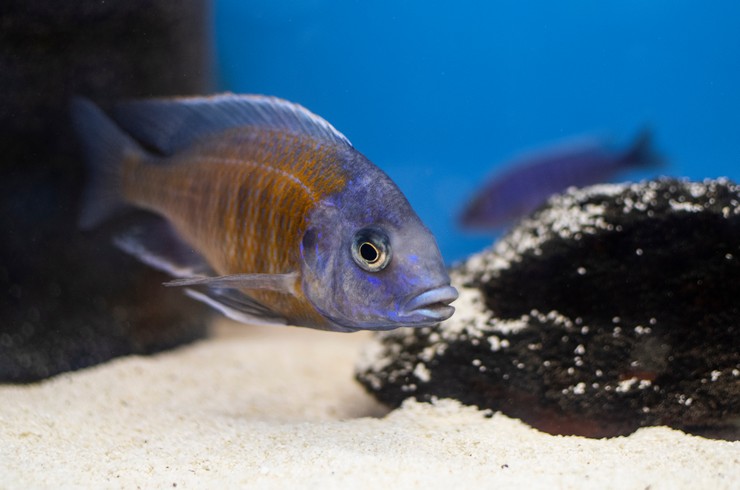 It is necessary to change 20% of the water in the aquarium weekly. This will prevent hazardous products of protein metabolism from accumulating in the water. Considering the large volumes in which they contain Kadango copadichromis, the issue of water treatment is acute. The usual sedimentation of tap water, often used by aquarists, is not able to remove all compounds dangerous for fish from it, and the convenience of simultaneously preparing (in basins, buckets, barrels) 60 liters or more of water raises great doubts. Therefore, it is best to use the Tetra AquaSafe conditioner. It instantly removes chlorine and heavy metals from the water and also enriches it with useful vitamins and colloids that protect the mucous membranes of fish. Just add 5 ml of the product for every 10 liters of freshwater, stir a little and pour into the aquarium – the problem of settling a large amount of water will no longer be relevant.

Kapadichromis of Kadango has a calm temperament. Most often, aggression on their part is manifested only during the breeding season. Therefore, it is best to choose non-aggressive neighbors as well. It is not recommended to plant fish with representatives of the Mbuna group, because the latter is more aggressive. Other types of copadichromis are not suitable for cohabitation, as they are capable of interbreeding. Cichlids such as aulonocars and blue dolphins are the best choices for a community aquarium. The color of the neighbors must necessarily differ from the color of the Kadango copadichromis, otherwise, the males of the latter may mistake them for their rivals. 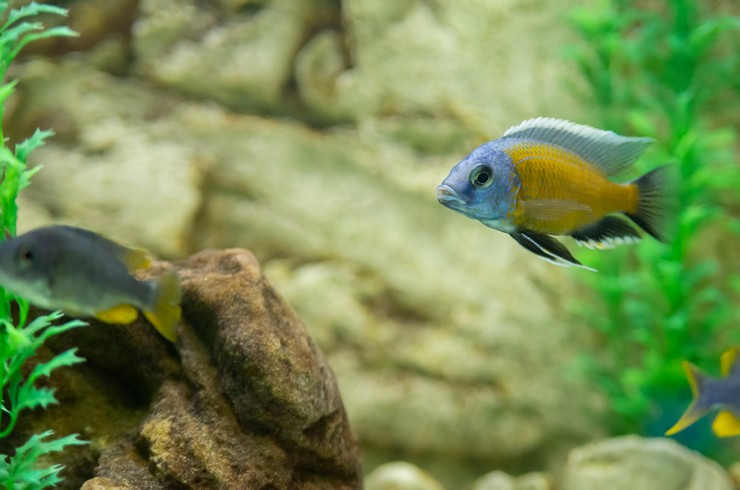 Feeding Kadango’s copadichromis does not cause any particular difficulties, because the fish take high-quality dry food for cichlids without any problems. These foods are completely balanced, do not cause digestive problems and certainly cannot become a source of infection in the aquarium, unlike live and frozen foods.

For basic nutrition, universal foods such as Tetra Cichlid XL Flakes or Tetra Cichlid Granules are suitable. They are well eaten by cichlids, contain important amino acids and a special complex of vitamins for health and longevity.

The popular red forms of Cadango’s Copadichromis will respond well to being fed Tetra Cichlid Color Pellets. They contain natural enhancers of reds, oranges, and yellows to make your pets even brighter and more visible.

In a small amount, plant components should be present in the diet of copadichromis. This can be done with foods high in spirulina algae such as Tetra Malawi or Tetra Algae Mix.

Cichlids should be fed 2-3 times a day with the same amount of food that will be eaten by the fish in 3-4 minutes. Avoid overfeeding and leave large amounts of uneaten food at the bottom of the tank.

Kapadichromis Kadango is easily bred at home. This is due, first of all, to the adaptation characteristic of most Malawian cichlids – bearing eggs in the mother’s mouth, which helps to protect eggs and fry from eating at the early stages of development.

Reproduction most often takes place in community aquariums. If necessary, the female can be deposited in a separate tank with a volume of about 50 liters.

The male, ready to mate, first of all, begins to equip the nest. Most often, he chooses a place near a large stone and makes a small hole in the sand, which he thoroughly cleans of debris. After that, with peculiar dances, he invites the female to mate. Courtship can be aggressive on the part of the male, which is why it is recommended to keep the fish in a harem, so that all the “anger” of the male does not fall on one female, but is sprayed between several.

The female, accepting courtship, swims up to the nest and lays a small portion of eggs, after which she immediately collects them in her mouth. The process of fertilization of eggs in Kopadichromis is common to all Malawians and is very interesting. The male becomes in such a way that his anal fin is near the female’s muzzle. The female takes the rounded spots located on the fin for eggs and tries to grab them with her mouth. It is at this time that the male injects her with his milk, which fertilizes the eggs. This process is repeated several times until the female’s mouth is filled to the limit. Sometimes a female can place up to 60 eggs in her mouth.

If spawning takes place in a separate container, then the male should be removed at the end of the process. The female takes full responsibility for raising the fry on herself. Egg incubation takes 3-4 weeks. Surprisingly, all this time the female does not eat anything. At this moment, it is especially vulnerable, so it is necessary to constantly monitor the fish for aggression from neighbors. Experienced breeders put out the female for 2-3 weeks, but after the fry gets stronger, they return it back as soon as possible. This is necessary so that the female does not lose the position in the hierarchy due to a long absence. During the incubation period of eggs, the fish should not be exposed to severe stress. Because of this, she may spit out eggs or eat the fry.

The fry of Kapadichromis Kadango is born quite large, capable of eating chopped dry food. After the fry gain independence, the female is returned to the common aquarium, if before that she was in a separate one.

Up to 3-4 weeks of age, males and females look the same. Further, the males begin to acquire a characteristic color for the species.