This group of fish, whose diet is based on algal fouling in nature, is of great benefit in the aquarium, allowing it to biologically combat unwanted lower plants. Labeo is one of the most beautiful representatives of this group, although not very easygoing with neighbors.

Labeo is an attractive carp fish, a popular algae eater. They are characterized by a “shark” constitution with a high dorsal fin, but the size in the aquarium rarely exceeds 10-15 cm.

Unfortunately, the natural habitats of these fish have been disturbed as a result of human activity (in particular, the construction of dams), so some species are on the verge of extinction. However, for aquaristics, labels are bred on special farms, so no harm is done to natural populations, despite the huge demand.

Fish attract attention with a contrasting color of the body and fins and an unusual swimming style: they are able to stay in the water strictly vertically and even belly upwards. The fish are very fast. Labeo is a territorial fish and can cause damage to some neighbors, so their choice must be approached carefully.

Labeo has an elongated cylindrical body with flattened sides and a curved back. The head is small with large eyes. Lower mouth adapted for scraping algae. It has two pairs of mustaches. The color depends on the specific species, but most of them are characterized by a contrast of color between the body and fins. The tail is two-lobed, the dorsal fin is high, vaguely resembling sharks. 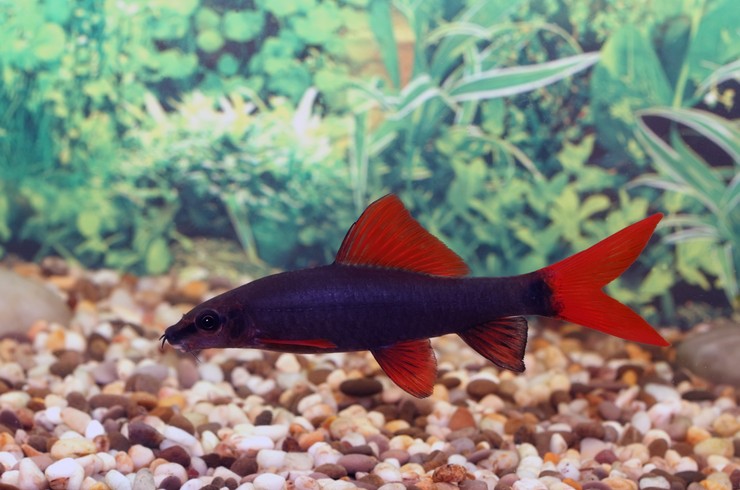 The homeland of the Labeo is the countries of Southeast Asia. They can be found in the overgrown flowing water bodies of Thailand and Singapore. The reservoirs are shallow, rarely more than one meter deep, with a sandy or rocky bottom. During the spawning season (which coincides with the rainy season), they migrate many kilometers to flooded floodplains. Drainage of marshes and construction of dams has led to the destruction of natural migration routes, due to which the number of species is reduced.

For the comfortable maintenance of the labeo, you need an aquarium with a volume of at least 200 liters. It is best to use small pebbles or sand as a substrate. Labeo are territorial fish, therefore, when keeping in a group, it is necessary to pay great attention to the zoning of the aquarium. This can be done with the help of live plants, snags, grottoes. With the right planning, skirmishes between fish will be minimal and not dangerous. To prevent the labeo from accidentally jumping out of the aquarium, it must be covered with a lid.

Fish are good at strong currents, powerful filtration and aeration of water are needed. Lighting should be moderate.

Due to the pronounced territoriality, it is necessary to select neighbors for the labeo very carefully. Young fish prefer to keep in a group, but as they grow up they become loners, preferring to meet relatives only during the spawning period. Individuals of their own species can be planted together only if there is a spacious aquarium with a large number of decorations so that the fish have as little contact with each other as possible. For the same reason, it is not recommended to plant black and redfish in the aquarium, the labels can confuse them with their relatives and attack them.

Fish that prefer the upper and middle layers of the aquarium will become good neighbors for the labeo: barbs, scalars, zebrafish, gourami, platies, rasbora, iris. Fish get along well with snails and calmly relate to most living plants, so they can be settled in a herbalist without any problems. 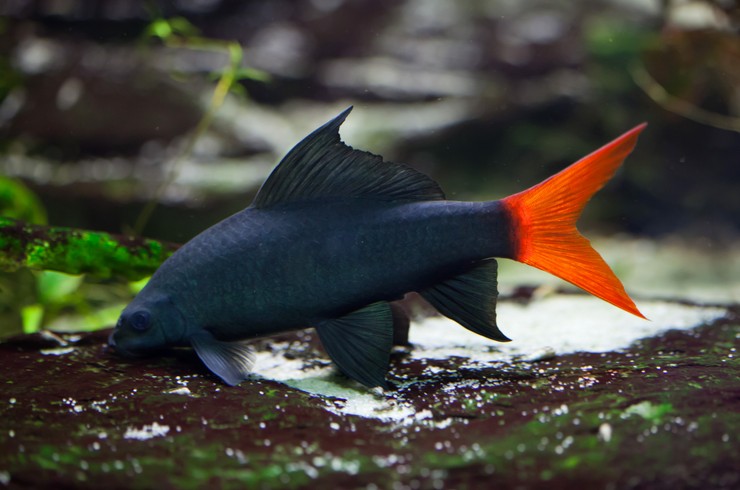 For a complete balanced diet of Labeo, we recommend high-quality dry food: TetraMin flakes or TetraPro Energy chips. Fish can eat them both in the water column as they sink, and collect them at the bottom.

Various methods are used to enrich the diet with vegetation: from the addition of natural greens and vegetables (spinach, lettuce, cucumbers) to the special cultivation of algae on glass plates in highly lit aquariums. All this is rather difficult, therefore it is much easier to periodically feed the fish with a special dry food with a high content of spirulina algae, for example, TetraPro Algae. In addition, the fish will help fight algal growth on the walls of the aquarium. 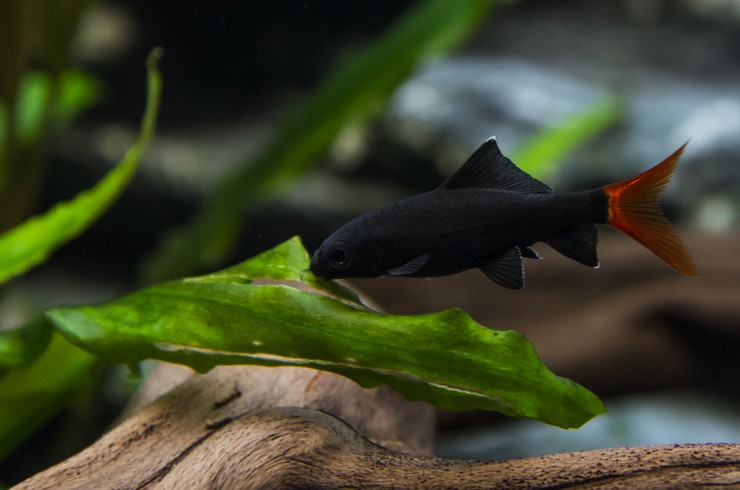 Breeding labeo at home is a laborious process. This is due to the need for hormonal injections.

Fish become sexually mature at the age of about a year. A spawning aquarium should have a volume of at least 150 liters and a water level of about 40 cm. 2 males and 1 female are selected for producers. For one or two weeks they are kept separately, feeding them with high-protein food, then the necessary dose of the hormone is injected into the muscles of the back and planted in a container for spawning. The process itself is very rapid. Within an hour, males actively knock out eggs from a female, the number of eggs can reach one and a half thousand.

The caviar of the labeo is very light and begins to float even with a slight wave of water. After spawning, it is better to transfer it to a separate 20-liter aquarium with low aeration. After 14 hours, larvae hatch massively. The caviar shell dissolves, which leads to cloudy water, so regular changes are necessary. On the third day after hatching, the fry is ready for independent feeding.