In the Lorikariev family or Kolchuzhny catfish, there is a group of species that are not yet very widespread in the aquarium hobby but are definitely of interest for their appearance and unpretentious maintenance. We are talking about loricariid, also known as lash catfish. What are remarkable about these interesting fish, you can find out from our article.

Loricaria is a group of freshwater fish from the Lorikariev (Kolchuga) catfish family that live in Central and South America. These fish have an extraordinary appearance, perfectly adapt to various conditions of detention, and are so peaceful that they do not even pay attention to fry. Loricaria is also good helpers to maintain cleanliness in the aquarium because they perfectly eat up the remains of food and algae. But despite all their merits, so far these fish are rarely found in amateur aquariums.

Loricaria has an elongated body with a thin caudal stem, at the end of which there is a pointed tail. For this feature in Western countries, fish are often called “catfish-whip” or “catfish-whip” (Whiptail Catfish). The sizes of loricariid are very diverse: there are both small representatives up to 10 cm long, and real giants capable of growing up to 30 cm. The whole body is covered with dense bony plates, creating a real “shell” to protect against enemies.

The head is triangular with small eyes. The mouth opening has been transformed into a suction cup that allows the fish to stay in strong currents and scrape off algae. 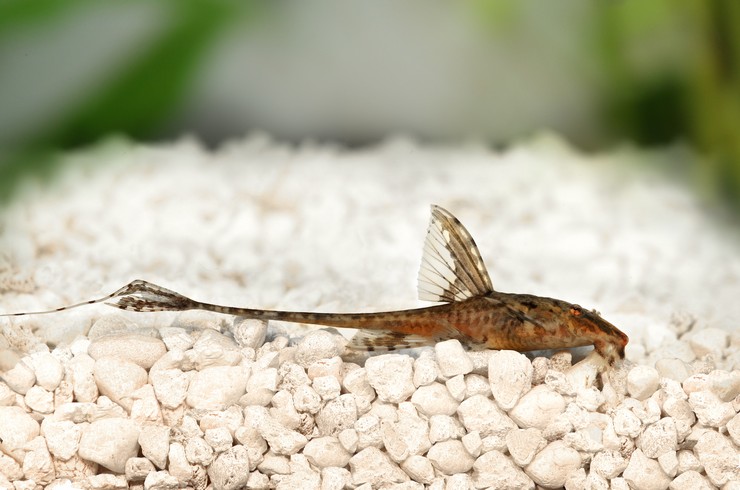 The fins are large; their rays end in small spines. Body-color is varied and depends on the specific species. Among the bright species, the red loricariid stands out, whose body has a rich red-brown color, which with a high degree of probability indicates an artificial origin, because natural individuals are modestly colored.

Sexual dimorphism is weak, females are larger than males. In the sea of maturation, males begin to develop special outgrowths on the head, imitating plant roots – tentacles.

Loricaria naturally inhabits the reservoirs of Central and South America. They are especially widespread in the Amazon basin in countries such as Peru, Brazil, Paraguay.

These catfish prefer rivers and streams with strong currents. They live most often on sandy substrates among snags and fallen leaves of trees. 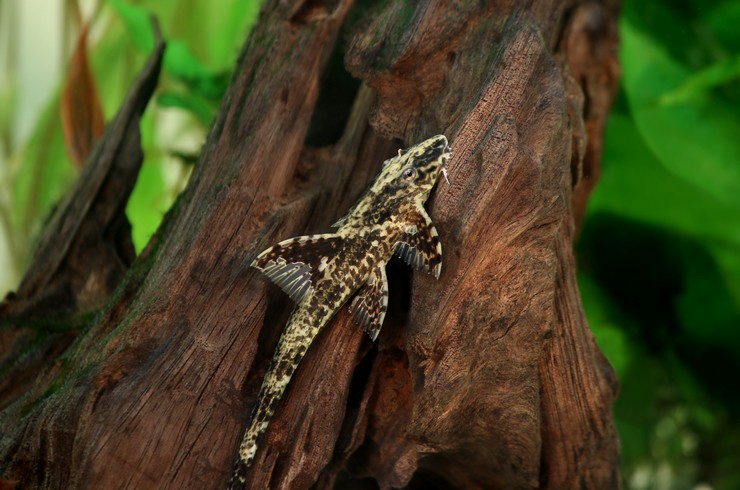 Loricaria is unpretentious fish that perfectly adapts to various conditions of detention. The main thing is to provide high-quality filtration, aeration and regularly maintain the aquarium. Loricaria can be kept either alone or in pairs or in groups if the volume of the aquarium allows. For a couple of small species, 40 liters will be enough, large representatives will require 150 or more liters.

The aquarium is best designed in a natural style, using coarse sand, stones, and driftwood. Such an environment will most of all correspond to nature. It is necessary to plant live plants along the walls, preferably with wide leaves. 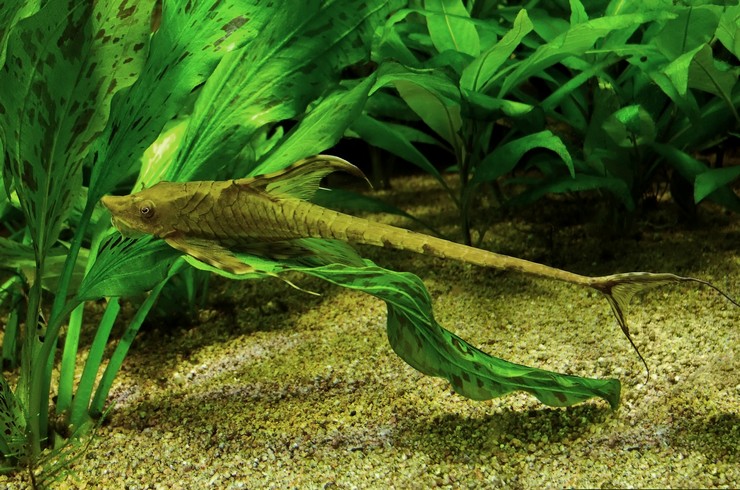 Loricaria loves to dig in the ground, so they often raise a suspension. To keep the water clean, you must install a filter that is suitable for the power. Catfish are sensitive to dirt, so remember to make weekly water changes up to 20% of your tank volume. Loricaria is twilight catfish, you should not install very bright lighting for them.

Loricaria is one of the most peaceful fish. Slight aggression is possible only in males defending their territory during spawning, but these skirmishes are more indicative.

But neighborhoods with very active species that like to bite off fins (barbs, tetrapods, sickles) should be avoided. Loricaria is a rather timid fish, so it is necessary to make sure that they get enough food because instead of “fighting” for food with other species, they prefer to sit out in a secluded place.

When kept in an aquarium, sinking tablets for bottom fish such as Tetra Tablets TabiMin, Tetra Pleco Tablets, or Tetra Wafer Mix are the best choices for feeding loricaria. The tablets quickly sink to the bottom, where the catfish usually feed, and also retain their shape for a long time, without polluting the water. They are completely balanced and contain a complex of vitamins for the health and longevity of your pets.

Loricaria also eats up well the remnants of food (flakes, chips, granules), which the neighbors in the aquarium did not have time to eat, which makes it possible to better maintain cleanliness in it.

Breeding loricaria is not difficult, especially if you already have experience breeding other catfish, for example, ancistrus. If there are a couple of fish in the aquarium, then there is a high probability that they will spawn on their own, without creating special conditions. Sex differences in fish are not very obvious: females usually have a more rounded abdomen, and sexually mature males have many spines on their heads.

The substrate for spawning is grottoes, plastic tubes, pots, coconut shells, etc. The female fertility is usually about 100 eggs. After spawning, the clutch is guarded by the male. Incubation lasts 7-9 days. After hatching, the larvae consume the contents of the yolk sacs for a couple of days, then proceed to self-feeding.

Fish become sexually mature at the age of about a year.