Macropods are rightfully considered the pioneers in the world of the aquarium hobby. In Europe, this species appeared only a little later than goldfish. Its beauty and unpretentious content played a big role in the popularization of aquariums, so macropods are still very popular pets.

Macropod, or paradise fish (Macropodus opercularis) – a representative of the labyrinth from the Macropod family. The name of the species is made up of two Greek words: “macro” – large and “pods” – leg. This name was given to the fish by the greatest taxonomist Karl Linnaeus, who saw a “leg” in the elongated anal fin of the macropod. A distinctive feature of labyrinth fish is the presence of an additional respiratory organ. In appearance, it resembles a small sac, densely pierced with blood vessels, located next to the gills. The labyrinth organ allows fish to use atmospheric air for breathing, which is vital in typical macropod biotopes – wetlands of rivers, canals, rice fields, where the absence of flow and a large amount of organic matter lead to a decrease in the concentration of oxygen dissolved in water. 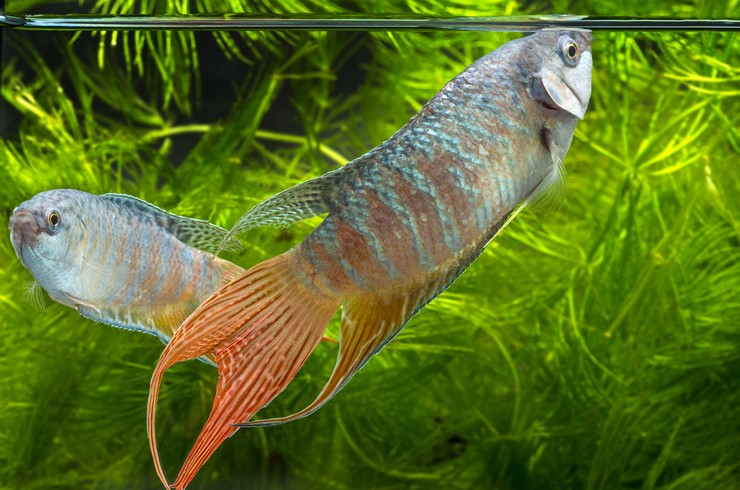 It should be noted that the macropod is one of the most aggressive labyrinth fish. Like the closest relatives – Siamese cockerels – adult males are extremely quarrelsome with each other. Although they are usually not interested in other inhabitants of the aquarium.

Macropods are very interesting fish. They are smart and curious. It is a pleasure to observe their behavior.

At present, the macropod is listed in the International Red Book, but as the species that causes the least concern. The decline in numbers is associated primarily with the development of natural habitats of the species by humans and pollution of the natural environment. 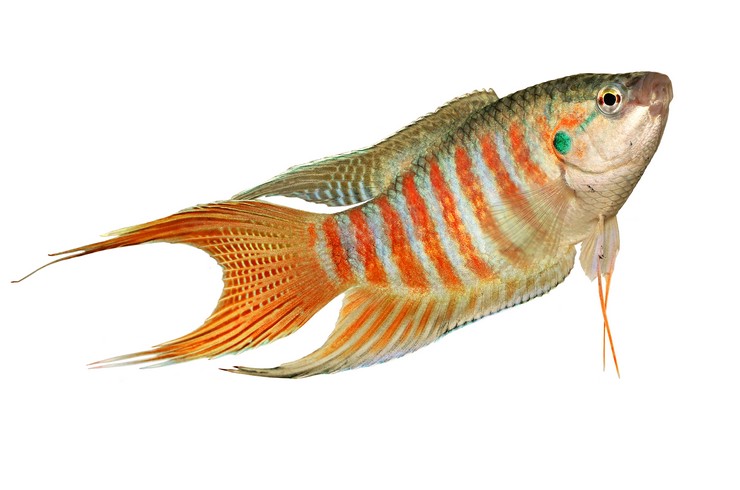 The coloration of macropods deserves special attention. The main body color is blue or deep olive with numerous transverse red stripes. Unpaired fins are bluish-red; the tail may have white spots. Near the gills, there is a shiny blue eye surrounded by a red spot. We are talking, first of all, about males, females are colored much more modestly. The intensity of the color depends on the water temperature and the degree of excitement of the fish. Breeders have obtained a number of color variations, for example, albinos, which do not differ in content from the classical form.

The average life expectancy is 5 years.

The first copies were brought in in 1869 by the French consul Simon. Unfortunately, at that time nothing was known about the need for labyrinth fish to capture air from the surface of the water, so they were transported in sealed barrels. Only 22 fish out of 100 got alive. Macropods were presented to the French aquarist Pierre Carbonier, who quickly managed to breed the fish. In 1876, macropods arrived in Berlin. This was the beginning of the widespread distribution of this species. 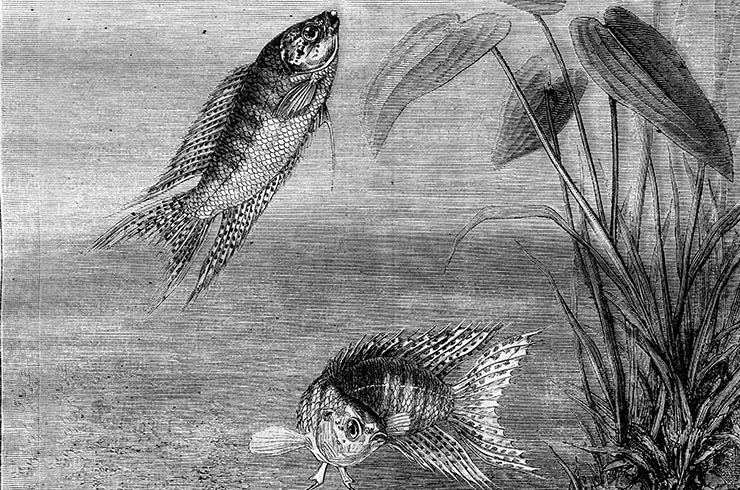 Macropod is widespread over the vast territory of Southeast Asia. It can be found in the south of China, Vietnam, Laos, Cambodia, Malaysia. The fish was successfully introduced in Japan, Korea, USA, on the island of Madagascar. 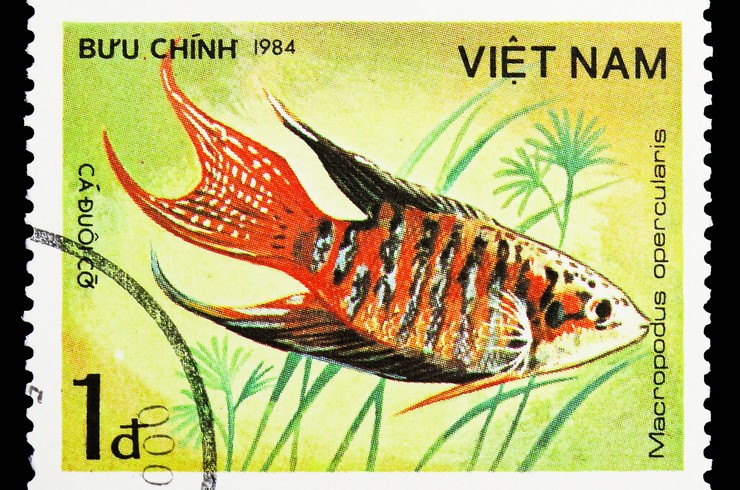 To keep macropods, you need an aquarium with a volume of 40 liters or more. This will be enough for one male and a pair of females. Fish can jump out of the water, so the aquarium should be covered with a lid. Keeping macropods alone is a bad idea. From this, they become wild and aggressive even towards other species. Flocking in a properly equipped aquarium allows you to even have several pairs. In addition, only in the group will the most interesting behavior appear, and the color of the males will be brighter. It is best to keep the different color variations separately so that the breed does not degenerate. 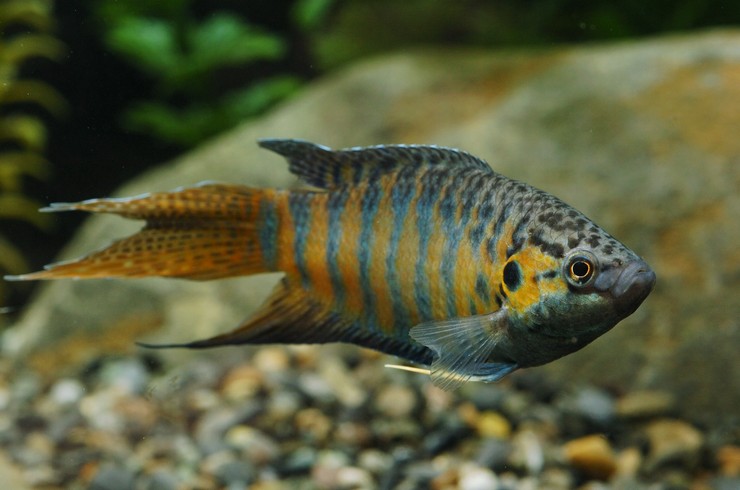 It is better to use the soil in dark shades, the fish look much brighter on it. The best decorations will be natural driftwood and thickets of living plants. Any popular species are suitable for growing in aquariums with macropods: Vallisneria, hygrophilous, ferns, hornwort, mosses, echinoderms, etc. Macropods are also good for floating plants: pistia, riccia. They dim the light from the lights and also help to anchor the bubble nest that males build during spawning. But it is important to ensure that floating plants do not cover the surface of the water with a solid carpet: a place is needed in which the fish can capture the next portion of the air. 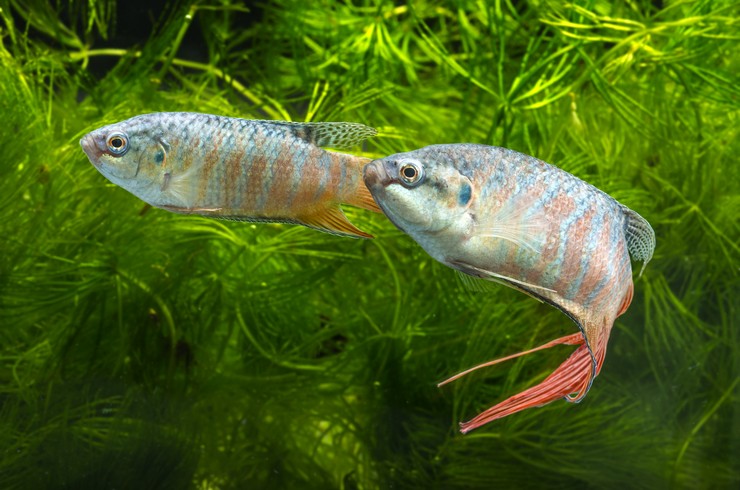 The presence of a thermostat and a compressor in the aquarium is optional. The fish are well adapted to life in relatively cool water (from 15 ° C) and with a low oxygen content (the labyrinth organ helps in this). It is advisable to install a filter, it will maintain a comfortable environment in the aquarium. But do not create a strong current, macropods prefer a calm flow of water.

Macropod compatibility information is mixed. You can find reviews so that the fish lives well in a common aquarium and does not show interest in its neighbors. But there is also the opposite point of view, that the macropod drives other fish around the aquarium, and sometimes even kills them to death. The latter, of course, is much less common and is associated either with the individual characteristics of a particular fish or with a violation of the conditions of detention – an incorrectly selected sex composition, few shelters, a small volume of the aquarium, etc.

But scalar, discus, neons, telescopes, it is better not to keep together with macropods. Any fish with veil fins will not be suitable as neighbors, because there is a very high probability that the macropod will bite them. The fry, which will become live food for the macropod, has little chance of survival.