In the vast majority of species, two individuals participate in reproduction – a male and a female. Even all known hermaphrodites require cross-fertilization, that is, the body cannot fertilize itself. But the marbled crayfish, which will be discussed in our article, are really amazing animals that have learned to reproduce in a special way (without the participation of a partner). Let’s get to know them better.

Marble crayfish (Procarambus virginalis) is a freshwater crustacean from the Decapod family. Now it can be found in almost every corner of the planet, it has successfully acclimatized in many regions.

Scientists believe that Procambarusfallax crayfish are common in the southeastern United States as the ancestor of marble crayfish. At one time, they became famous aquarium pets, since they are interesting exotic animals, and caring for them is minimal.

The crayfish bred well, and once, in Germany, thousands of kilometers from their historical homeland, individuals with a very beautiful “marble” color were born, which instantly made them even more popular. But the main surprise was ahead: it turned out that these crayfish acquired the ability to parthenogenesis – the development of the embryo without fertilization. That is, all specimens of marble crayfish are females that are capable of producing offspring, which appears by the usual division of an unfertilized cell. In fact, all offspring are clones of the mother. This was the first time a similar phenomenon was observed in Decapod crayfish. At first, the new form of crayfish was attributed to the original species – Procambarus fallax, but in 2015 the taxonomy of marble crayfish was revised, and it became an independent species – Procarambus virginalis. 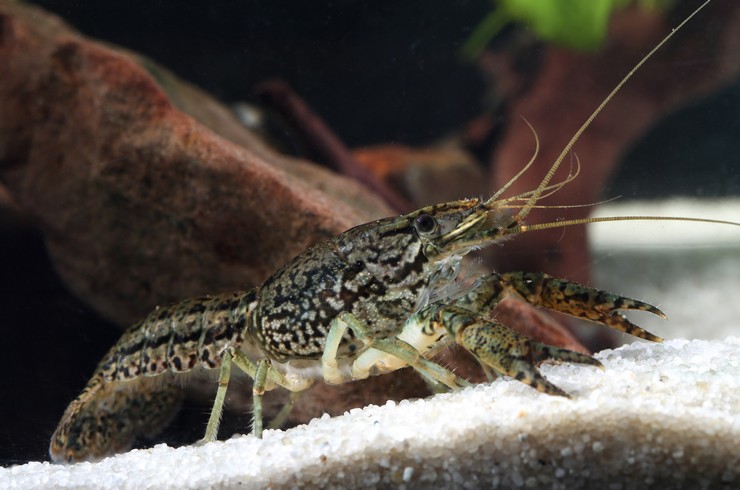 Due to its wide distribution in the aquarium industry and regular entry from home conditions into the wild, this species began its “victorious” march across the planet. At first, these were the countries of Europe, and later it was found in Asia and Africa.

Due to its amazing adaptability, marbled crayfish has become an ecological problem in some countries, as it successfully competes with native species and displaces them from their usual habitats. For reproduction, he needs only one individual, unlike other relatives, so he can quickly capture new territories.

For this reason, the import and sale of marble crayfish are prohibited in many countries.

The marbled crayfish has a body structure typical of Decapods. The massive cephalothorax is covered with a dense carapace – carapace. Walking legs are attached to this section, the first pair of which carries pincers. Also located here are the jaws and senses (eyes and antennae). The abdomen is mobile, consists of several segments, under which the swimming legs are located – the pleopods. There is a wide caudal fin at the end of the abdomen. 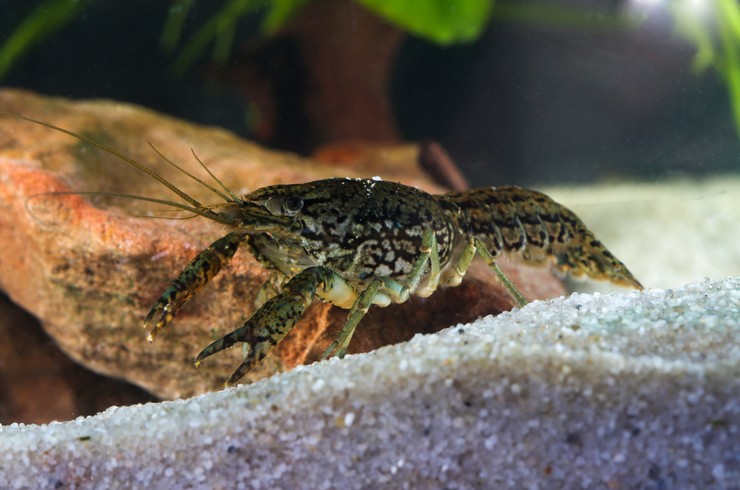 One of the main values ​​of this species is body coloration. The general color varies from greenish to brown, and a special pattern resembles streaks on marble, for which crayfish got its name. In young individuals, this color is poorly expressed, but with age, it becomes brighter and more contrasting.

The maximum body size is 15 cm. However, it strongly depends on the conditions of detention, so if you place the crayfish in a cramped aquarium, it will not be able to reach this size.

The life span in an aquarium is 2-3 years.

The marbled crayfish originates from Germany, it was here that it was first bred and began to spread around the world. Now it can be found in the waters of the USA, Europe, Africa, Japan, Madagascar. This is facilitated by the possibility of life in wide ranges of water parameters and omnivorousness, as well as parthenogenesis.

An adult marbled crayfish can grow up to 15 cm, so an aquarium of at least 40 liters is needed to keep one individual. But it is better to purchase a large container since crayfish produce a lot of garbage, and it will be difficult to maintain the biological balance in a small volume.

The bottom area is more important than the height of the tank.

Coarse quartz sand or small pebbles are usually used as soil, this makes cleaning easier since the remains of feed and waste do not sink deeply. It is very important to install a large number of all kinds of shelters. They will help to zone the territory if several crayfish live in the aquarium, on the one hand, and will become an excellent refuge during molting, when the crayfish is most vulnerable, on the other. For this purpose, you can use artificial caves, plastic pipes of a suitable diameter, broken pots, halves of coconuts. 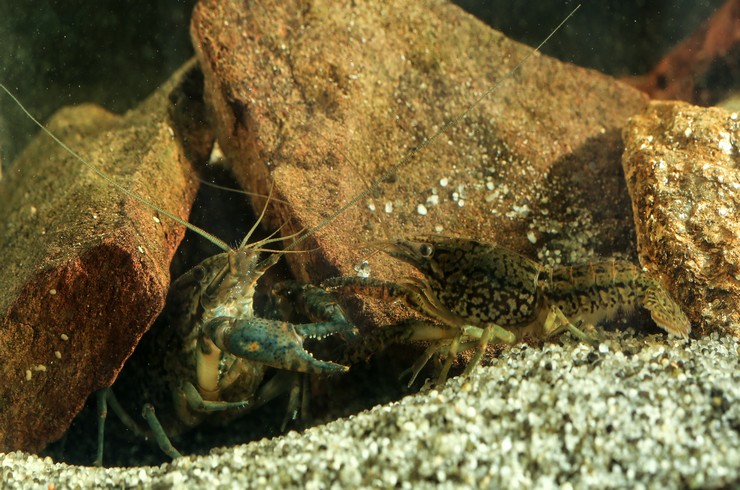 Equip your aquarium with a powerful filter to help keep the water clean and of high quality. The course can be moderate or strong. Use an internal filter whenever possible, as marble crayfish are renowned for their ability to get out through the hoses of external filters. Round-the-clock aeration of the aquarium is very important, especially in the warm season when oxygen is poorly soluble in warm water.

Once a week, you need to change 20% of the water in the aquarium. Most often, tap water is used for this purpose, but it is worth remembering that it can be unsafe for crayfish, for example, it contains chlorine and heavy metals (copper is especially dangerous). To quickly make your tap water safe for crustaceans, use the Tetra Crusta AquaSafe Conditioner. Along with the water change, perform a mandatory siphon of the soil to remove waste and uneaten food residues. The water should not be very soft, otherwise, there will be problems with the formation of the shell.

Unfortunately, marble crayfish are not compatible with living plants. They simply use most of the plants for food. Only species floating on the surface of the water (hornwort, riccia, pistia) are suitable, as well as Javanese moss, which often withstands the onslaught of crayfish.

For crustaceans, molt is characteristic. It consists of shedding the old hardcover that does not allow it to grow. A new one forms under it, which remains soft for some time. This is the most difficult and dangerous period in the life of crayfish. After all, until the new “clothing” has hardened, it becomes easy prey even for small fish species or their relatives. Therefore, after dropping the chitinous shell, the crayfish hide in shelters until the new one gets stronger. If you find an old crayfish cover in the aquarium, do not rush to throw it away. A little later, the pet will eat it to get the necessary minerals for the growth and formation of a new shell. Young crayfish shed more often, as they have increased growth.

Marble crayfish is allowed to be kept with some species of fish, but it should be remembered that he has a hunter’s instinct, and he can try to hunt the smallest individuals. Fast breeding fish such as mollies, platys floating in the upper layers of the aquarium, such as zebrafish, and mobile species such as barbs, are good candidates.

But with bottom fish (corridors, ancistrus, torakatum), crayfish will not be friends. It is better to exclude them from the list of possible roommates. Slow fish and owners of veil fins also get here – craufish will mercilessly pluck them with its claws. The marbled crayfish is unfriendly to snails and shrimps.