In an effort to diversify the inhabitants of the aquarium, hobbyists often use various invertebrates, the most popular of which are shrimps and snails. Among the latter, there are a lot of beautiful species that will decorate any tropical aquarium, but there are also those that settle in aquariums without permission, bringing a lot of trouble to the aquarist with their uncontrolled reproduction. We are talking about ground Melania snails. How much harm is there from them, as many aquarists think, and how to get rid of unwanted guests, you will learn from our article.

Melania (Melanoides sp.) Is a freshwater snail from the Tiara family. These gastropods live in silty and sandy soils of reservoirs, are nocturnal. In nature, their ecological role is significant – they are detritivores, that is, they feed on decaying organic matter. They also serve as intermediate hosts for some types of parasitic worms.

Melania can often be found in freshwater aquariums, and no “fish farm” is immune to the appearance of these ground dwellers. Newborn snails are so small that it is almost impossible to notice them with the naked eye. Mollusks enter a new aquarium, usually with plants, decorations, or substrate.

The attitude of aquarists to Melania is ambiguous. One group believes that they are not harmful, and does not see problems from their presence in the aquarium, while the other perceives them as an exceptional evil and tries in every way to survive these uninvited guests.

Among the features of Melania, one can distinguish completely gill respiration and live birth. Snails do not need to periodically rise to the surface of the water for a breath of atmospheric air, they can constantly be in the ground. Due to living birth, Melania has incredible reproductive rates. In uncontrolled conditions, their number grows exponentially, up to the point that sooner or later the aquarist discovers “living” soil in himself – so many snails can be between stones. This creates certain difficulties in the fight against Melania.

In the external structure, Melania is distinguished by a body and a shell. The latter has the form of a cone of 5-7 whorls (30-35 mm long), expanding near the mouth. It is equipped with a special lime cap that can be tightly closed. This usually happens when predators attack or when unfavorable conditions occur. On the sink, you can easily notice the reddish-brown strokes that form an individual pattern. The shell is colored mainly brown, but in general, the color is unusually variable. 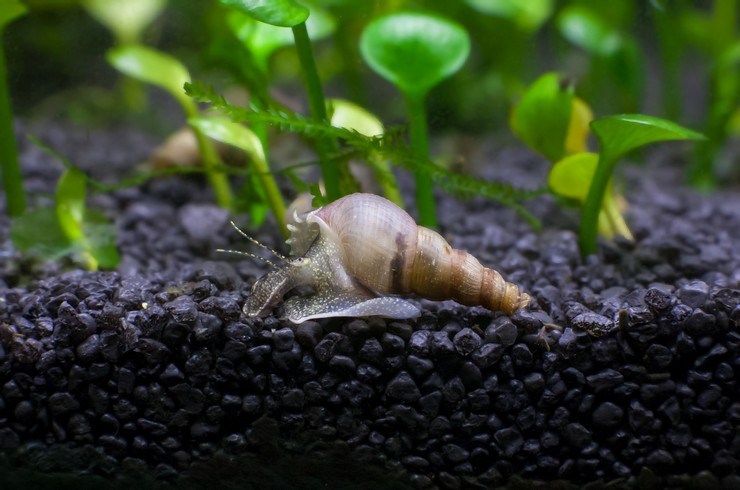 Melania is a fairly common species in nature. They can be found throughout most of the African continent, in tropical and subtropical regions of Asia, as well as in Australia.

Snails are extremely hardy, so they quickly mastered regions that are atypical for themselves, for example, southern Europe and North America. In some places, new settlers compete successfully with the local malacofauna and crowd out native species.

A typical Melania biotope is a small sandbank up to 1 meter deep with a soft, silty bottom. More than a thousand adults of Melania can live on one square meter of area. During the day, snails prefer to bury themselves in the ground and go in search of food in the evening.

The high adaptive abilities of the Melania have become the reason that the snail can live in almost any aquarium. Hardness and acidity are absolutely not important for its survival, and the water temperature can vary over a wide range – from 18 to 28 ° С. Even moderate salinity does not scare this tenacious snail.

Adequate oxygenation of the water is essential for survival. This is due to the fact that respiration in mollusks is carried out only by the gills. With a decrease in oxygen concentration, one can observe a massive “exit” of snails from the soil. 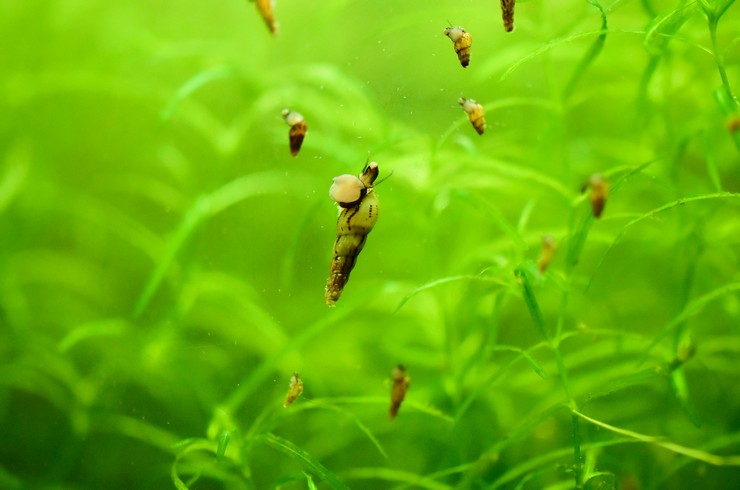 Particular attention should be paid to the soil. The ideal option for Melania is small pebbles 2-6 mm in size. Although this indicator is conditional. There are plenty of examples where Melania lives even between very large stones.

The size of the aquarium does not affect the life of the Melania at all; they easily survive in any container with water and aeration.

Melania’s are able to coexist with most species of aquarium fish, regardless of their size and degree of aggressiveness. The only exceptions are fish, which are not at all averse to feasting on gastropods – tetrapods, bodies, macropods. The neighborhood with the predatory snail Helena will also end sadly.

Melania’s themselves are not capable of harming other inhabitants of the aquarium. There is a common misconception that they are capable of attacking and killing fish. It appeared due to the fact that snails were repeatedly seen on dead fish, and it seemed that the fish were their victims. In fact, the fish died for completely different reasons, and Melania, like any detritivores, simply ate the remains.

Melania’s natural diet consists of algae and semi-decomposed organics. In a general aquarium, snails do not need additional nutrition at all. They will have enough food that the fish did not have time to eat. It falls to the bottom, where sooner or later it will be discovered by Melania.

If you need to feed Melania, sinking tablets for bottom dwellers, for example, Tetra Tablets TabiMin, are perfect for this purpose. Few snails will refuse such a tasty treat.

Melania’s multiply extremely quickly in an aquarium. For these snails, viviparity is typical for mollusks. Snails are dioecious, in order for offspring to be born, the presence of males and females is necessary. In rare cases, parthenogenesis is observed – the development of embryos without fertilization.

Young snails are very small in size, about 1 mm. They hide in the roots of plants and grow slowly, adding 5-6 mm per month. The fertility of one female Melania can range from 10 to 60 babies.