Today I want to tell you the story of a wonderful dog named Stubby. It was he who became the only dog in the world that was awarded the military rank (Sergeant). For his military services during the First World War, he received many medals and orders. 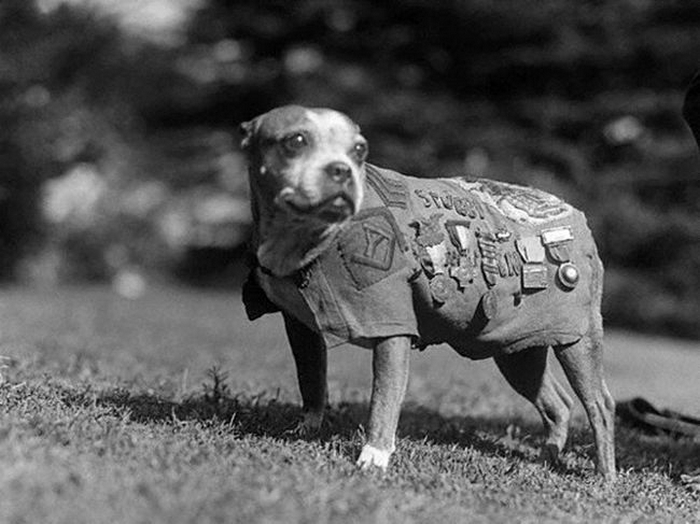 In 1917, Private J. Robert Conroy, who was undergoing military training at Yale University before being sent to Europe, picked up a brindle-colored puppy with a short tail. Conroy named the foundling Stubby and brought him to camp. Stubby was a cross between a bull terrier, probably a boxer or a Boston terrier. However, it hardly matters. The quick-witted, cheerful puppy was happily accepted by Conroy’s fellow soldiers in the 102nd Infantry Division and plunged into soldier’s life.

Stubby learned to distinguish the horn signals, participated in drill training, and even saluted by raising his right paw. It was forbidden to keep animals in the camp, but Stubby’s presence raised the unit’s morale so clearly that he was allowed to stay. When the division was being transported to France, Conroy, wrapped in an overcoat, smuggled his four-legged friend aboard the ship and secretly carried him to French soil in the same way.

Of course, the commanding officer soon discovered the “smuggling”, but quickly changed his anger to mercy, once Stubby demonstrated his ability to salute. So the dog became the mascot of the 102nd Infantry Division. He quickly got used to the sounds of gunshots and artillery cannonade, but the gas attack became the real baptism of fire for Stubby. The poor dog breathed in the poison and was even sent to the hospital for treatment, but he learned to recognize the smell of dangerous gas even in the smallest concentration and once saved his fellow soldiers – the gas attack began in the early morning when many were asleep.

Stubby made a fuss, ran through the trenches, barked, and bit the soldiers, thus saving many lives. More than once the dog rescued the wounded soldiers, dragging them to safety and calling for the orderlies. And once Stubby found a German spy in the Allied trenches, raised a bark, and when he tried to run, grabbed his pants and held him until the soldiers arrived. For this feat, the regiment commander promoted him to the rank – Stubby became the first dog sergeant in the history of the US armed forces. He was wounded by grenade fragments in the chest and front paws, but he returned to service and served until the end of the war, taking part in seventeen battles, and then returned to America, where glory awaited him.

There was not a single significant newspaper that never wrote about him. The dog was accepted into the American Legion, and from that time on he participated in all military parades. Stubby met with three presidents – Wilson, Harding, and Coolidge were admitted to the Red Cross and the YMCA. The YMCA even pledged to provide him with three bones a day and a place to sleep for the rest of his life.

The famous dog was attracted to participate in election campaigns, agitation, to the sale of war bonds. The owners of the Grand Hotel Majestic have lifted the strict ban on dogs staying in the hotel in order to be able to host Stubby. And in 1921, General John Pershing, who was the supreme commander of the US military during World War I, awarded Stubby the Dog Hero’s Gold Medal, commissioned by the Animal Welfare Society. 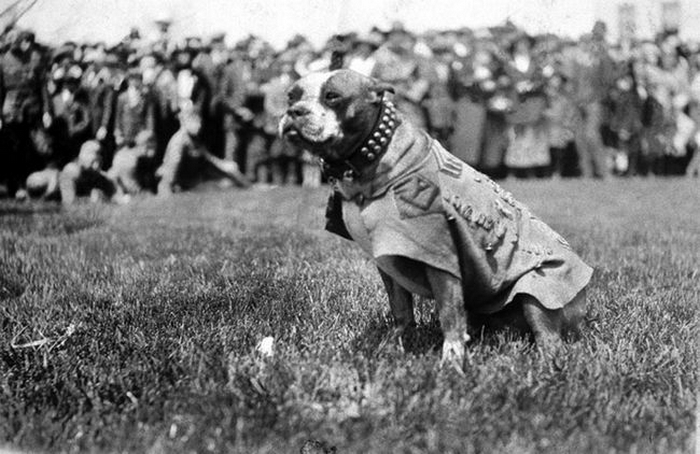 When Stubby’s owner began studying law at Georgetown University, the dog also became the mascot of the varsity football team. In between halves, he drove the ball around the field, which invariably delighted the audience.

Sergeant Stubby died in 1926. The New York Times reacted to the event with an obituary of the kind that no celebrity of the time ever received ….

Stubby was honored with a tile on the Walk of Fame at the Freedom Memorial, an American World War I monument, in Kansas City at a ceremony held on Armistice Day, November 11, 2006. 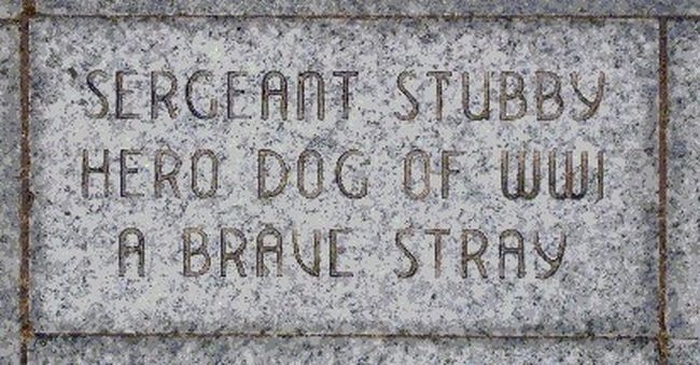