According to the approved standard, the height of an adult Rottweiler must be at least 56 cm in females and at least 61 cm in males. However, sometimes you can find a dog that looks very similar to a Rottweiler, but its growth is clearly not reaching the allowed minimum. 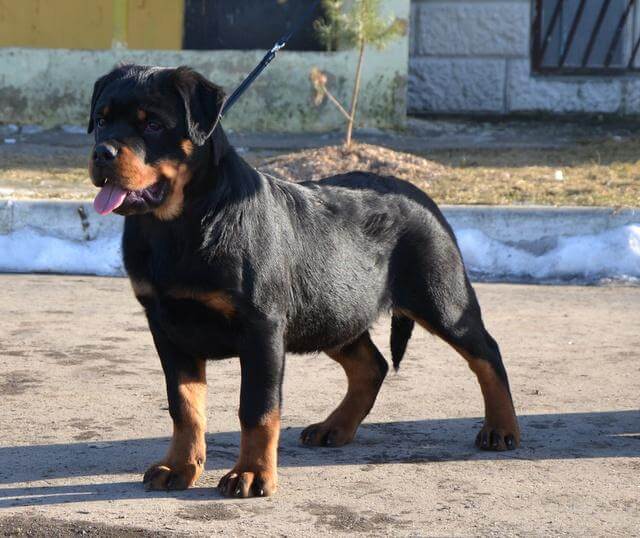 There are no official varieties for this breed. The only thing that left a small mark on the appearance and character of these dogs is their nationality. So, dogs living in Germany are recognized as exemplary classics. Rottweilers from America are slightly larger and meaner than their German counterparts. Immigrants from England are practically no different from dogs from Germany.

Important! A Rottweiler that falls short of the official “minimum” is either a mestizo of the breed or its dwarfism is caused by a genetic malfunction.

Most often, dwarf Rottweilers and Rottweilers, which have any features of appearance, appear as a result of crossing with another breed. For example, from an alliance with a German shepherd, large puppies are born, which in adulthood become real healthy men and strong men. They look like black and tan German shepherds. Such pets need a strict owner. Without training and education, they can be dangerous to the people around them.

A rare hybrid is LabRottweiler. This is due to the fact that it is extremely difficult to get healthy and adequate offspring from these two breeds. But those puppies that do not have physical and psychological developmental pathologies look just great. From their parents, they adopt only the best features of appearance and temperament.

Mini Rottweilers are most often born from sick parents or as a result of crossing a purebred male (female) with a mongrel. Basically, these mestizos are pugnacious and vicious, it is difficult to train and educate them despite their well-developed intellect.

If the mini-Rottweiler is born from representatives of the same breed and the small growth is explained by a developmental defect, the dog should not be allowed further breeding. Most often, dwarfs do not live up to adulthood, having, in addition to their small stature, also several serious health problems.