You can meet these unusual creatures either on the tropical coasts of the Indian Ocean (in Africa, Asia, Australia) or in amateur marine aquariums. They live in the water of various salinity – from sea to fresh, along muddy shores of the seas or at river mouths, among mangroves; they dig minks up to 20 cm long and 15 cm deep. 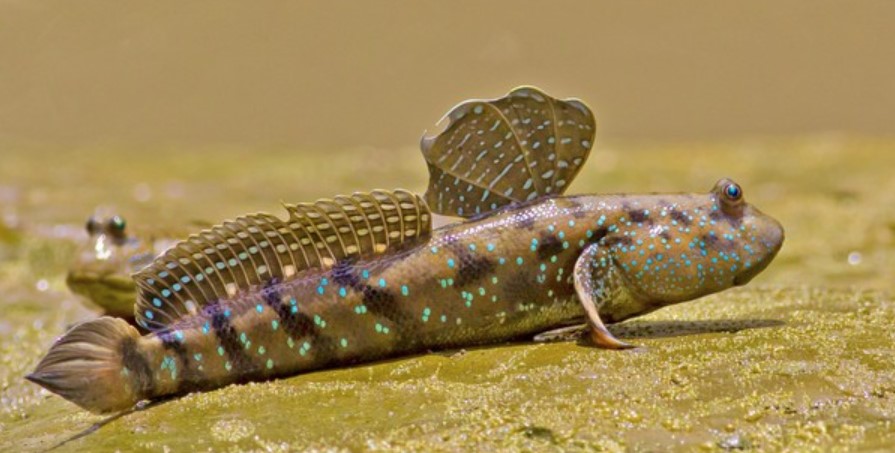 These animals are called mudskippers and belong to the kingdom of fish. Their peculiarity is a semi-terrestrial way of life. Jumpers have unusual pectoral fins that look like legs. These fins are very strong, which allows them (with the help of their tail as well) to move quite quickly on land, jump high and even climb trees. Other fish, when frightened, are not particularly willing to run into the water and, on the contrary, try to get out of it as soon as possible. You can even meet these fish on the veranda of a house in Pattaya or Melbourne, on resort beaches, and in wild mangroves.

Jumpers breathe with gills, which close tightly to avoid drying out. In addition, the fish also have skin respiration, which, together with the supply of water in the enlarged lower jaw and the ability to swallow air, allows maintaining the desired level of oxygen. This breathing method is very important for fish because the water in their habitats is poor in oxygen and nature had to find a way out. At the same time, the appearance of the fish is more like amphibians – they have a large head, a dexterous body, and large movable eyes that protrude strongly from the head.

The behavior of the fish is interesting. During the breeding season, males build deep, up to half a meter, burrows filled with water. There, after active mating games, the female lays eggs. After that, the male stays on guard next to the nest. They have to be protected from both male rivals and predators, such as crabs. But what is interesting is that the jumpers are quite successful with crabs: they unfold their bright dorsal fins, undress the gill chambers and make formidable attacks on the enemy, pinching them by the legs. Often, the crab does not stand such mockery and retreats.