Not all fish in aquariums have been thoroughly studied. The origin of some species is still unknown. Nannakara neon is a bright representative of a similar group of fish. You will learn about all the secrets of this amazing fish from our article.

Nannakara neon (nannakara blue neon, or nannakara electric) is one of the most mysterious and poorly described fish, the origin of which is a mystery. It is believed that this is a hybrid obtained in an aquarium, the progenitor of which was the American cichlids. The fish is quite unpretentious in terms of keeping conditions, and its endurance, coexistence with other species, and a beautiful bright blue color make it attractive for novice aquarists. 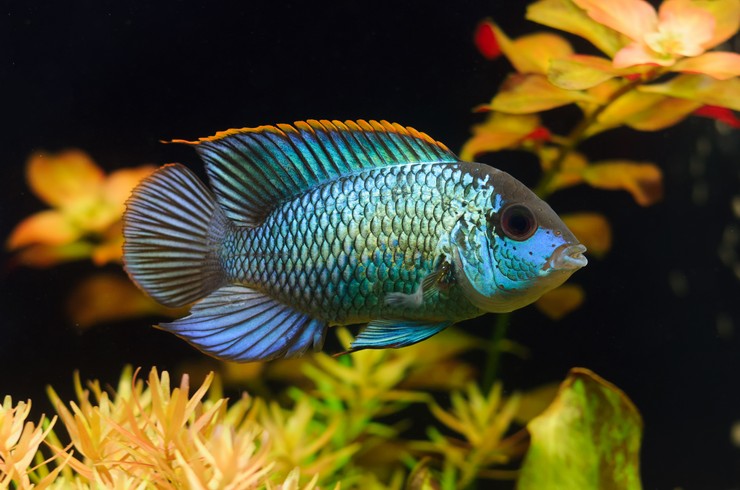 Nannakara neon is a classic representative of the Tsikhlov family. It features a bright blue hue of scales with a pearlescent golden sheen. The body is slightly compressed laterally. The long dorsal fin extends from head to tail.

The size of fish usually ranges from 9 to 15 cm. Sexual dimorphism is not pronounced. You can distinguish a male from a female by the shape of the dorsal fin – in males it is pointed, along the upper edge there is a narrow dark stripe, sometimes of a reddish hue, and in females, the fin is rounded. Males are also larger and brighter in color.

There are several opinions about the origin of neon nannakara. For example, there is information that this fish was brought at the beginning of the 20th century from South America to Europe. However, it is much more likely that it is not a natural species. The first mentions of neon nannakara are found in 2012, and these fish probably appeared relatively recently. Some aquarists believe that Nannacara Electric is not a member of the genus Nannacara and is a bluish-spotted hybrid that was introduced from Singapore or Southeast Asia. However, the species that were taken as a basis for creating this hybrid are not known for certain. This is also evidenced by the possibility of crossing between neon nannakara and bluish-spotted cancer to obtain viable offspring.

Nannakars are dwarf cichlids, and their size can vary significantly depending on food and conditions. Fish in suitable conditions can even reach sizes up to 20 cm, on average 10-13 cm. Therefore, it is better to settle them in an aquarium from 100 liters. steam, and ensure sufficient filtration and aeration. Obligatory weekly changes of 20-25% of the water volume.

These fish are hardy, easily adapt to various conditions, do not show significant preferences for water parameters.

As a soil, you can use sand or gravel with a fraction of up to 4 mm. At the same time, nannakars do not have the habit of digging the ground, they are one of the few cichlids with which you can safely plant live plants. There should be plenty of free swimming space in the aquarium, it is better to plant the plants in groups near the back and sidewalls.

The aquarium needs to be equipped with many shelters, for this purpose you can use driftwood, clay decorations, stones, and grottoes, which will also serve as a good spawning place. 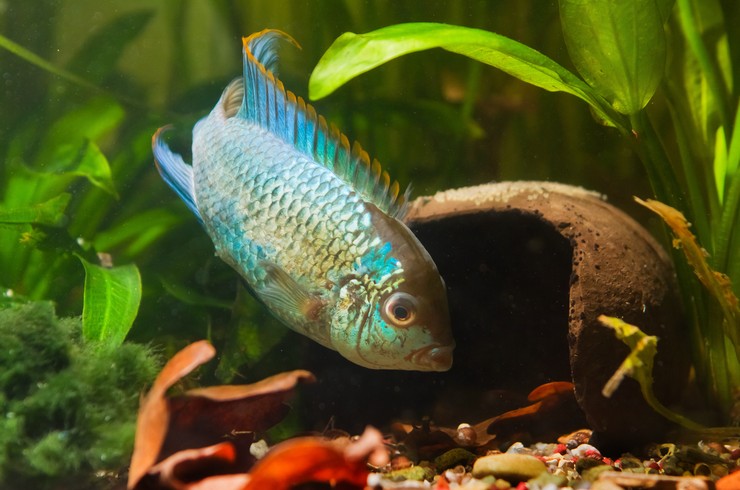 Most of the time nannakaras are quite peaceful fish, aggression can be manifested only during the spawning period. When picking up neighbors in a shared aquarium, pay attention to their size. It is better if the fish are proportionate or slightly smaller. As the experience of many aquarists shows, nannakars often live well with peaceful medium-sized fish – swordtails, mollies, barbs, corridors, chain catfish. Quiet dwarf cichlids and gourami will also become good neighbors.

It is better not to plant fish with veil fins, nannakars can easily bite them. It is not necessary to add them to large aggressive predators such as Astronotuses or Acars.

Unfortunately, very small fish – neons, cardinals, rasboras – can be perceived as food, so it is also better not to keep them in the same aquarium with nannacars.

Nannakaras are typical predators that are constantly in search of food. When kept in an aquarium, they are happy to eat any kind of food – live, frozen and dry. The first two types are not recommended due to their inferiority and the possibility of bringing in the causative agents of various diseases. High-quality dry food is free from these disadvantages, completely balanced, and safe. Choosing food is necessary depending on the size of the fish and the personal preferences of the pets.

The Tetra Cichlid dry food range has been specially developed for the complete daily feeding of various cichlid species.

Small sinking granules such as Tetra Cichlid Mini Granules are well suited for young nannacars, as well as chips prepared using a gentle technology that preserves a large number of nutrients and enriched with an energy concentrate – TetraPro Energy so that the fish are always full of vitality.

For feeding adult fish, it is better to use Tetra Cichlid Sticks floating on the surface of the water, shaped like natural food.

The fish will not give up on the universal food for all types of ornamental fish – TetraMin. You can choose from flakes or pellets, depending on the tastes of your pets.

All Tetra foods are made from high-quality ingredients, so they are maximally absorbed by fish, which reduces waste, allowing you to keep the water clean for a long time.

It is necessary to feed nannakar 2-3 times a day in small portions. Fish tend to overeat, so avoid overfeeding.

Sexual maturity in nannakar occurs at the age of 6-8 months. The fish pair up and there is a competition between them. To stimulate spawning, during the next change, it is necessary to raise the water temperature by several degrees. A female nannakara lays eggs in the amount of 150-300 eggs on plant leaves, in coconuts, grottoes, on flat stones, or in other places specially selected for spawning. After fertilization, the female takes care of the eggs, while she can show aggression, including towards the male. In some cases, the male and female guard the eggs together.

Then the female digs a hole in the ground, where she transfers the eggs. They will remain in this place for another 2-3 days, until the fry hatch. Young fish do not tolerate sudden changes in water parameters; at this time, you need to carefully prepare water for changes.

At first, fry feed on special small feed, for example, TetraMin Baby, as they grow, they can be transferred to other feeds.

After the fish begin to swim on their own, both parents take care of them, often there is a rivalry between them, in which the male usually wins. He protects the fry, drives away uninvited guests, and a flock of kids swims after him in the aquarium. This behavior is observed for about two weeks, after which, if the grown fry are planted, the couple will spawn again. Reproduction is regular, nannakars do not touch their young, but in some conditions, they can eat eggs. This behavior is observed in an aquarium of insufficient volume, with a high stocking density of fish, under conditions of stress, and with inappropriate feeding. Water parameters are also important, it is worth avoiding sudden changes in them.