The Newfoundland is an incredibly large but kind family dog. Despite their size, Newfoundlands are completely devoid of aggression and get along well with young children, house guests, and other pets. 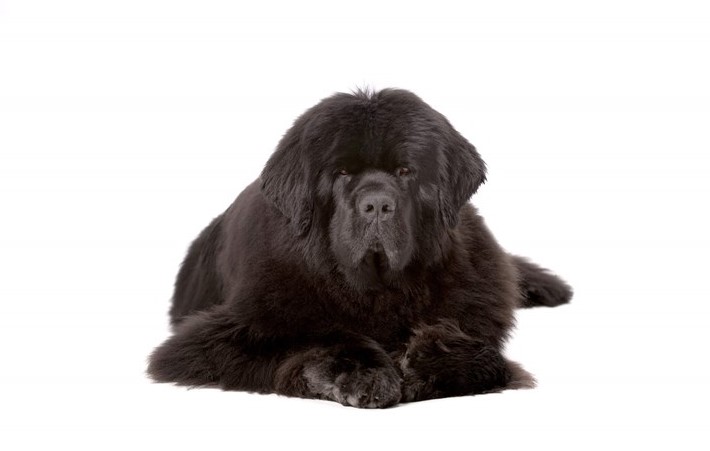 The Newfoundland is a very large dog. Their height reaches 70 centimeters, and the giants weigh no more than 70 kilograms, but there are often cases when this figure is exceeded. Newfoundlands are very beautifully built. Powerful skeleton, large head, broad chest. From a distance, this dog can be mistaken for a small bear. Newfoundland is the owner of very dense skin and long hair, with the exception of the head. Their undercoat is very dense with waterproof properties.

Like bears, Newfoundlands comes in black, brown, and gray. Sometimes a lighter red or brown color is found. A more rare variety of colors is black and white. 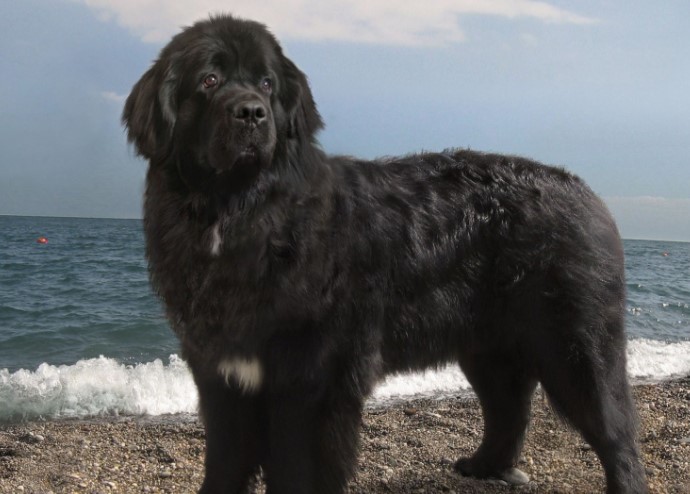 There are several versions of the origin of this wonderful dog breed. However, everyone agrees that the Newfoundlands have a very ancient pedigree and the exact time of the birth of the breed is unknown. These animals appeared on the island of the same name – Newfoundland. The ancestors of the Newfoundlands are considered to be the English Molossians, who was brought to new lands by the colonists. There they crossed with the dogs of the Indians. From such a misalliance, the Newfoundlands appeared, according to one version. It is also believed that the breed could have been the result of crossing the now-extinct black wolves with Mastiffs.

The first mention of pets dates back to 1639. After centuries of formation, the Newfoundlands breed began to be regularly imported into Europe. And after another century, they take part in an official show in the UK. Most often, these dogs were used as faithful companions and helpers of people. 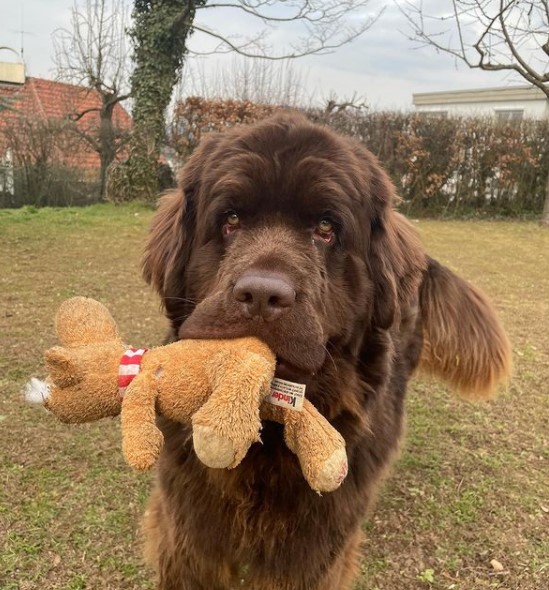 Despite their formidable appearance, the Newfoundlands are a very calm and intelligent breed of dog. They are distinguished by great patience and loyalty to the family of their master. They are very sociable, so they get along well with smaller pets, in many cases showing some kind of patronage to their friends. The Newfoundland has no hunting instinct at all, so you don’t have to worry that this breed of dog can hurt. Newfoundlands are very intelligent, so they are easy to train. However, they always notice the need for this action for the owner, so do not expect zeal from them when doing “useless” things.

These dogs get along well with children. They closely monitor the safety of your children, and if something happens, they will definitely make the right decision in a critical situation. They are very patient, so they steadfastly withstand all bullying from children. Since this breed was bred by fishermen, Newfoundlands simply love to swim. Newfoundlands just love to learn new things. Even some people may envy their curiosity. Therefore, pets love to travel very much.

Newfoundlands are accustomed to a passive lifestyle, so do not expect a high-spirited run from them. However, they are very fond of quiet walks with the owner. But it is best to walk with the dog in cool weather since the Newfoundland as a breed was formed in the north. If you live in a warm area, organize walks early in the morning and late in the evening. Then the dog will feel best. 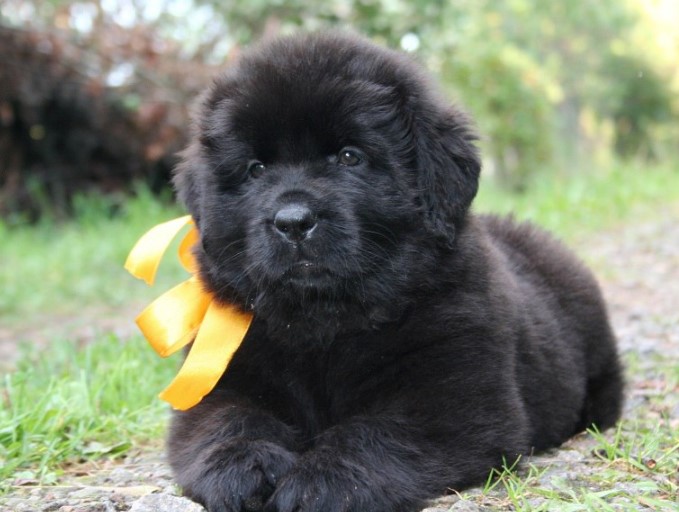 From the very first glance, it should be borne in mind that Newfoundland is not the easiest dog to care for. Due to its size, it requires a lot more space than the average dog breed. If you live in an apartment, you should provide your pet with a small separate room, or a spacious corner so that the Newfoundland can consider him his own. You also need to understand that the long coat of this breed of dog will take a separate place in your life. It will be everywhere: on all clothes, in food, and even in the air. To avoid this, you need to comb out the Newfoundland very carefully and all over the body. This will avoid tangling. For such a long coat, use a stiff brush.

Newfoundland needs bathing once a month. It is best to train your dog to do this from birth. Special shampoos and conditioners make the coat more manageable for brushing and also give it a very beautiful shine. However, some experts recommend dry shampoo for use. Its use will preserve the natural lubrication of the dog’s coat. Thanks to which the coat of Newfoundland is less exposed to dirt and moisture. 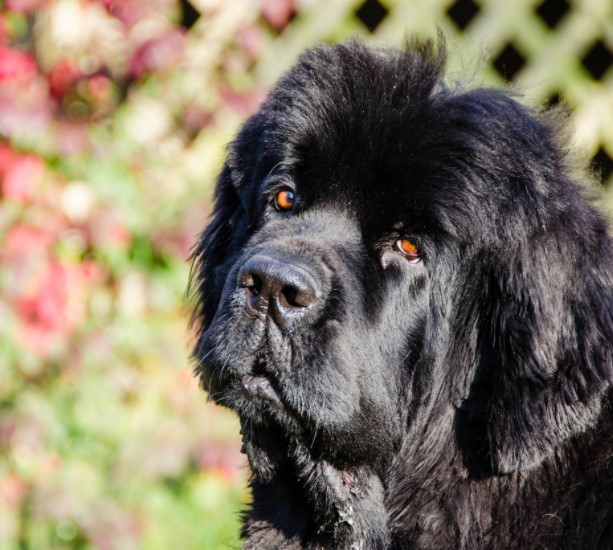 Dogs of this breed do not have a long life span. She rarely exceeds 10 years. Like all other dog breeds, Newfoundlands have a predisposition to certain diseases. Due to their heavyweight, their hip joint often suffers from dysplasia, and the heat can cause heatstrokes. These large dogs can have volvulus, autopsies, and cardiomyopathy. Also, Newfoundlands have strong salivation. You need to take this into account before starting a dog and be ready to constantly have a handkerchief near to wipe saliva.

Most often, Newfoundlands suffer from the following diseases: 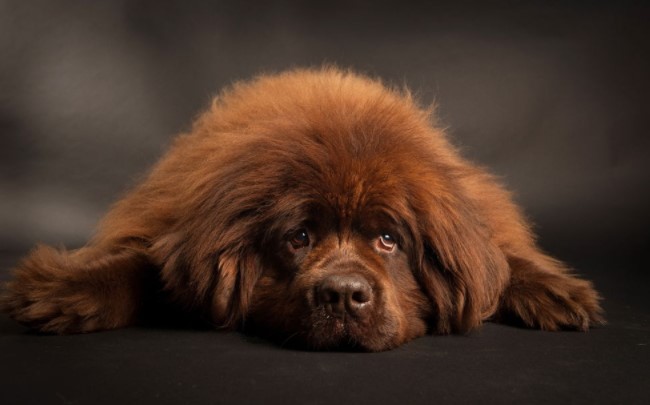 Newfoundland refers to a dog of impressive size. But the dog also has a big heart and good nature. The pet is devoid of aggression and gets along well with children. Newfoundland can be used as a nanny, leaving the dog to watch over the little ones. Newfoundlands are distinguished by their great patience and loyalty towards their loved ones. They love their owners until the last days and will never betray them. Dogs love walking, they are smart and judicious.

The Newfoundlands sociability allows them to get along well with smaller pets, showing their patronage to them. These dogs love to travel and always tolerate any trips well. Pets love to swim, so owners should take their pets to the pond more often in the summer. Newfoundlands are great for large families.