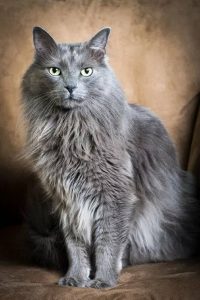 Nibelung what is this cat breed?

The Nibelung is the long-haired version of the Russian blue cat. The only difference between the two breeds is the length of the coat.

And the wool of these animals has a really unusual structure – soft, silky, does not fall off, flows, with a dense undercoat. The tips of the posts are almost discolored (they have a barely noticeable blue tint), and due to the density of the fur in the sunlight, it seems that a cloudy halo or a hazy cloud appears around the cat’s body.

They are elegant medium-sized cats, with a small wedge-shaped faceted head with a characteristic two-edged profile, with bright green, slightly slanted eyes. The long, thin body on high limbs and small feet gives the impression of a “cat on tiptoe”. And the fluffy, long, slightly pointed tail in the form of a plume gives the cat elegance.

The history of the creation of this interesting and unusual breed of cats is inextricably linked with the history of breeding the Russian blue cat. The long-haired Russian blue cats were well known in Europe at the beginning of the XX century, long before they had their name and the first standard of the breed was written.

The founders of the breed were the cat Siegfried (1984) and the cat Brunhilde (1985). Cora Cobb, the mistress of Siegfried and Brünnhilde, was captivated by the beauty of these cats, they looked like a Russian Blue, but unlike the latter, they had long hair.

To find out if a new breed could be obtained from them, she turned to the geneticists of the American Cat Association. The association’s geneticist, Dr. Solvay Flueger, said it was more of a semi-long-haired Russian blue. With the help of a doctor, Cora Cobb has drawn up a breed standard that matches the Russian blue standard, except for the length of the coat.

Members of the TICA (Russian Blue Breeders) Association objected, with the result that the standard was revised to give a unique look, reminiscent of the unique cats that were imported from Russia in the early 20th and late 19th centuries. 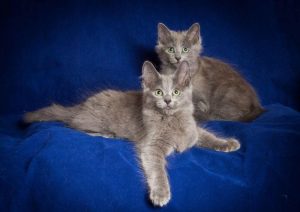 TICA was the first association to recognize a new breed of cats and adopted the standards of the Nibelungs, this happened in 1987, and in 1993 it was recognized by the TCA.

The breed is still very young, and the Nibelungs are bred in the USA, Canada, and European countries. The breed was also recognized by the American Cat Fanciers Association (ACFA), the World Cat Federation (WCF), Livre Officiel des Origines Félines (LOOF), and independent associations of Holland, Belgium, Germany. However, this did not affect the availability in any way, cats are still rare.