The shaggy Old English Sheepdog attracts with the charm of its appearance. I just want to bury my hands in long wool. But intending to be the owner of a bobtail, it is necessary to take into account in advance that careful care will be required for the coat. 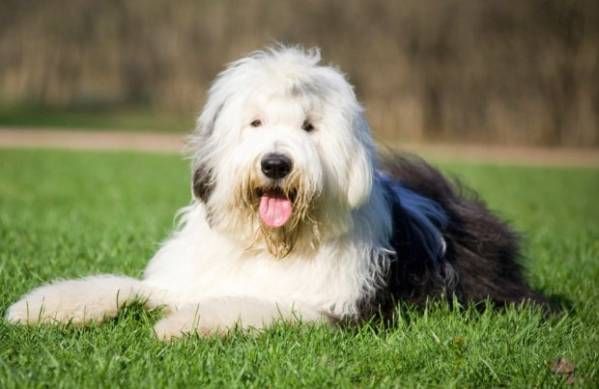 The abundant coat of the Old English Shepherd Dog has a stiff texture, it is double, and the soft undercoat has water-repelling properties, and the topcoat is long, stiff, and not straight, but the guard hair cannot be called curly. The sebaceous secretions from the skin, which are spread over the coat, give it a glossy appearance.

The ears of the dog are moderately covered with hair, on the head, neck, body, the hair is about the same length and thickness. The forelegs are abundantly covered, the hair on the hind legs is even more abundant, longer, and denser.

A well-groomed healthy dog ​​looks shaggy but does not give the impression of being messy, just hair grows in all directions.

The standard allows any shade of gray, blue, “grizzly”, but the shade of brown is undesirable. The body of the dog and the hind legs are the same color, there may be white “socks”. Gray hair is acceptable, but white patches are discouraged on solid areas of the body. The head, neck, forelegs, lower abdomen are white in color, and there may be marks. The difference in shades of gray, from light to dark, is not punishable at exhibitions.

There are Old English Shepherd Dogs with non-standard colors, such as black and white, brown and white, or merle.

Show-class dogs require careful care, you need to maintain their appearance. Maintaining the appearance of dog owners often rely on specialists in grooming salons, since it is important to maintain the overall shape of the silhouette, length, and fluffiness of the coat.

If the dog does not participate in exhibitions, then for the convenience of caring for the animal, it is advisable to shave off the hair in the abdomen, cut the hair in the anus to prevent the sticking of feces and yellowing, and also shorten the hair between the pads. Shaving hair all over the body makes grooming easier, although the breed is not one of those for which a short haircut is natural. An Old English Sheepdog with a long, well-groomed coat looks much more attractive, and the natural appearance is worth giving 1-4 hours a week to grooming the pet’s coat.

To care for the hair of a bobtail, you will need a mat of haircutter, a comb with wide teeth, scissors, if you plan to cut hair on the legs and in the anus.

The dog should be taught to brush from puppyhood, despite the fact that puppies have short hair.

It will take at least half an hour to comb the bobtail, but it is much more effective to repeat the procedure 3-4 times a week, even more often during the shedding period, otherwise the hair will spread everywhere. By the way, the molting period can be a real nightmare for the owners of the Old English Shepherd Dog. During the molting period, females lose more hair than males. The combed undercoat can be used for knitting warm clothes.

A disdainful attitude towards the appearance of the animal will lead to the fact that dust, leaves, dirt, insects will get stuck in it, an unpleasant odor will appear, mats will form, skin diseases (dermatitis, eczema) will develop, as a result, it will be easier to shave the animal than to untangle and wash hair. Mats can tighten the skin, giving the animal painful sensations.

Contrary to popular belief, bobtails cannot see through the hair that covers their eyes. Therefore, the wool is cut so that it does not interfere with visibility or is collected in a bun and fixed above the eyes with an elastic band.

Chin’s hair gets dirty during meals. You will have to wipe this area as often as possible or perceive the dog for what it is, but when a dog with dirty hair on its muzzle reaches out to sniff a person’s face, it can be unpleasant and unhygienic.

Bobtail grooming is not limited to brushing. From time to time, the dog needs to be bathed; for this, special detergents are used, selected taking into account the texture of the hair. Frequent washing requires paws and lower abdomen, these areas are very dirty when walking the dog in damp weather.