In the fight against the main misfortune of aquarists – algae – the biological method of their destruction helps well, that is, the use of fish or invertebrates, which happily eat unwanted vegetation in the aquarium. And, perhaps, the most effective helpers in this matter are tiny ototsinkly catfish, a small group of which is able to clear the aquarium of lower plants in the shortest possible time.

Otocinclus sp. Is a genus of freshwater fish from the Loricaria (Kolchuzhny) catfish family. These are the smallest representatives of the family, the average body length of the fish is only 3 cm. But, despite their modest size, they are real “workers” in the aquarium. Algae form the basis of the Otozinclux diet, so they do a great job of cleaning up these unwanted guests. A group of catfish in just a few days can completely clear the tank of diatoms, which often settle in the aquarium when it is started. The fish also helps to fight the “black beard”. But the most important thing is that ototsinkluses not only constantly look for and eat algae, but also do it very delicately, without damaging the delicate leaves of even plants such as Echinodorus tender, sanitaria, vesicular. For this reason,ototsinklus catfish are regulars in natural aquariums. Along with the Caridina multidentata shrimp, they were often present in the aquariums of the ingenious aquascaper Takashi Amano. Planting rate for ototsinklus catfish: 20 fish per 100 liters of water (when starting the aquarium) and 2-3 fish for the same volume after establishing biological equilibrium. 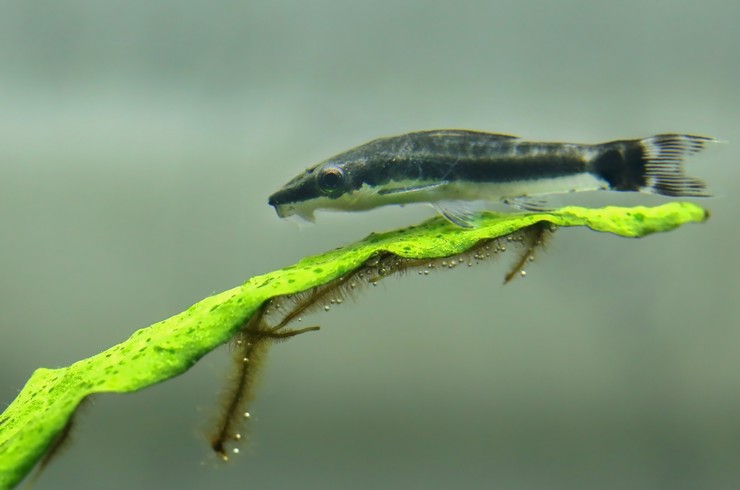 Currently, the genus includes more than 30 species of catfish. The differences between the species are insignificant, mainly in size and small variations in color and pattern of the pattern on the tail and head. The most common species on sale are Otocinclus affinis, Otocinclus macros plus, and Otocinclus vittatus. It should be noted that all ototsinkluses are equally effective against algae.

Like other loricariid catfish, ototsinkluses have intestinal respiration, that is, they are able to assimilate atmospheric air, swallowing it from the surface of the water. This device is a protective mechanism in case the oxygen concentration in the water drops significantly. The periodic ascent of the catfish upward is normal behavior for it. However, if the fish do this very often, then it is necessary to check the operation of the aerator.

Motorcycles are small catfish, the size of which varies from 2 to 5 cm. The body is elongated in length, flattened from top to bottom in the area of ​​the abdomen and chest. The whole body is covered with strong bony plates that serve as protection from enemies.

The mouth opening has been modified into a suction cup, which allows the fish to stay in the water flow and scrape off algal growth on rocks, decorations, and a glass of the aquarium. 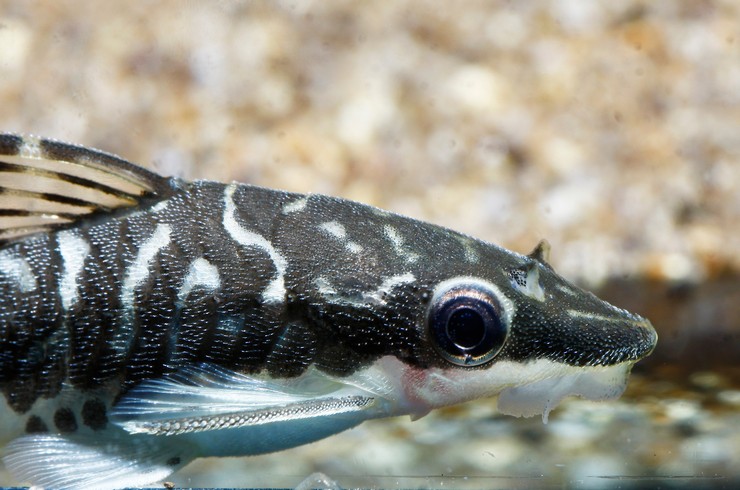 The color of ototsinklus is varied and depends on the species. Most often, the body is colored silvery with a yellowish tint and small brown spots. A wide dark stripe can stretch along the body. A rounded spot is often located at the base of the caudal fin. Some species have interesting coloration, such as the ototsinklus zebra, which is characterized by alternating dark and light transverse stripes on the body. Fins are colorless, with a greenish tint. There are thorns on the pectoral and dorsal fins that can damage the net, so catch the fish carefully. 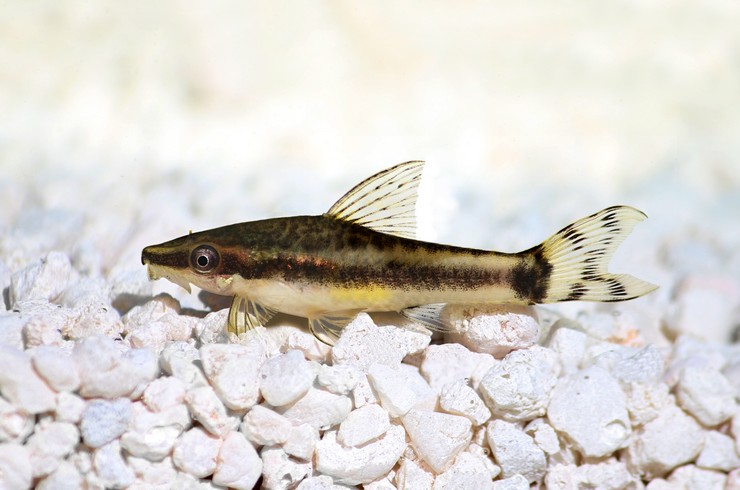 Sexual dimorphism is not pronounced; females are slightly larger than males.

In nature, ototsinklus catfish are widespread in the Amazon basin (Brazil, Peru, Bolivia, etc.). Fish prefer rivers with fast currents and high oxygen content. It is easiest to meet large flocks of catfish (up to 1000 individuals) in sandy shallow waters among thickets of aquatic plants and driftwood, from the surface of which these fish eat algae.

Otozinklus are schooling fish, therefore it is recommended to keep them in groups of at least 6 individuals. Catfish do not require large volumes of the aquarium; 40 liters will be enough for a minimum flock.

Fine sand is best suited as soil. Natural driftwood should be placed in the aquarium – they will serve as a place for the development of algae – the main food of ototsinklus. It is also necessary to plant a large number of aquatic plants, species with wide leaves – anubias, echinodorus, are especially well suited. 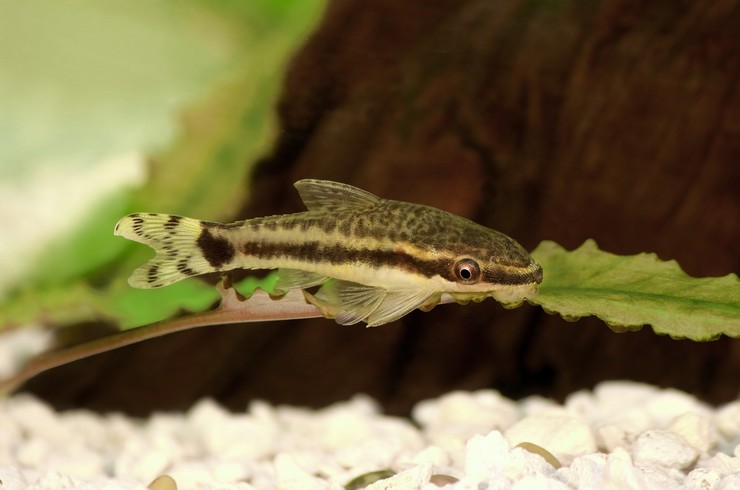 The most important thing in keeping ototsinklus catfish is maintaining high water quality because they are very sensitive to the content of nitrogenous compounds in their habitat. You can find out these parameters using tests. Ammonia and nitrites should be equal to 0, and the concentration of nitrates should ideally not exceed 10 mg / l. To do this, you need to properly start the aquarium and wait for the establishment of biological equilibrium, and only then plant the catfish. Effective filtration is equally important, it is better to opt for an external filter. When choosing a filter, pay attention to the size of the water intake holes. Otozinklus are small catfish and can be easily sucked into the filter. Aquarium catfish, as in nature, prefer oxygenated water, so it is recommended to additionally install a compressor. It is very important to feed high-quality dry food with good digestibility. This will reduce the amount of fish waste, therefore, the water will remain clean for a long time. 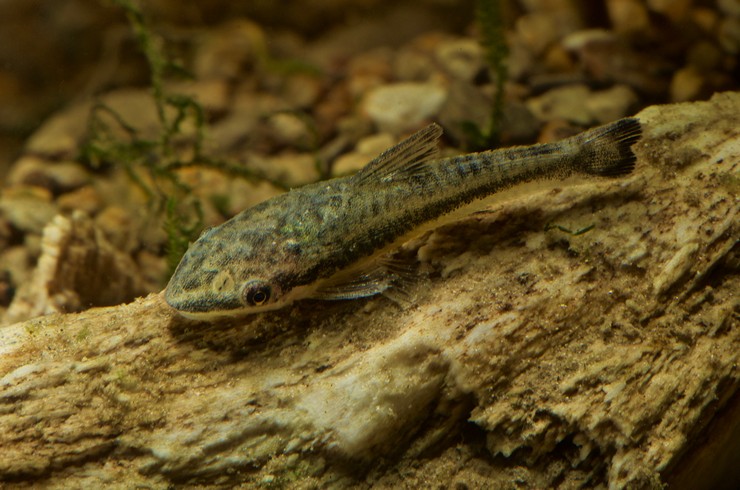 Lighting can vary from moderate to bright, catfish are not disturbed by light. Once a week, you need to change up to 20% of the water in the aquarium. The addition of Tetra ToruMin, a natural peat extract to create “black” tropical water, will have a good effect on the well-being of the fish.

Otozinklus are peaceful and therefore get along well with most species of calm ornamental fish of similar size. Catfish treat individuals of their own species calmly, there are no intraspecific conflicts in flocks. 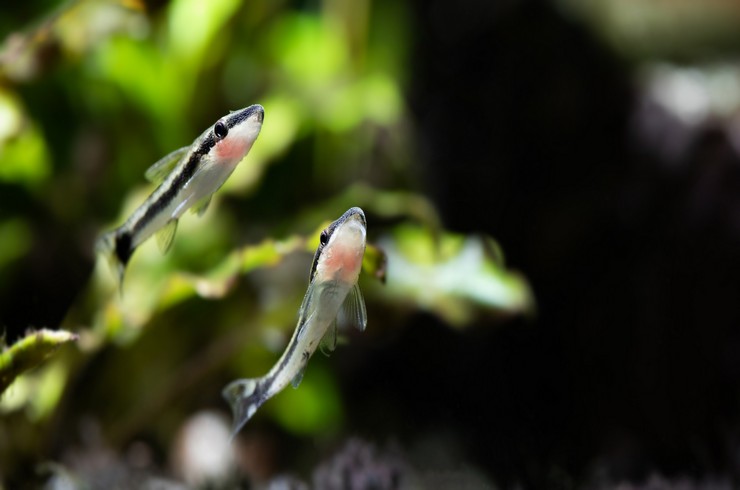 Neons, tetras, peaceful viviparous, shrimps will become good neighbors. But cichlids, especially large ones, will not be the best roommates, because they can easily swallow small catfish.

It is also highly discouraged to plant other algae eaters in an aquarium with ototsinkluses. Timid by nature, these catfish will lose the competition for food and remain hungry.