The Papillon, also known as the Continental Toy Spaniel, has been the favorite breed of the French kings for several centuries. And his luxurious appearance only complements his amazing intelligence. It is not for nothing that the breed is among the ten smartest companion dogs in the world. The word “papillon” in French means “butterfly”, therefore the breed is also known as the Butterfly Dog. 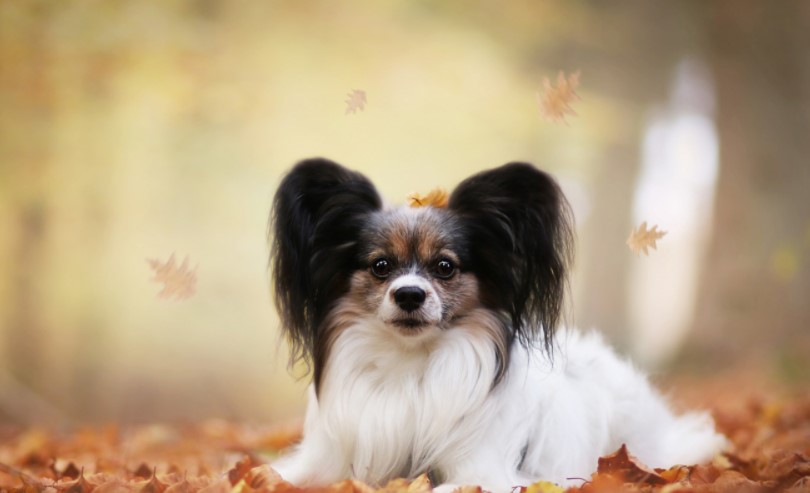 Some experts are inclined to believe that funny Butterfly Dogs first appeared more than 8 centuries ago in Lower Lorraine, part of the Roman state, which was located on the territory of modern Belgium, France, and the Netherlands. It is difficult to trace the exact time of the origin of the breed, but we can confidently speak of its close connection with royal dynasties and amazing palace stories.

There is a legend that King Henry III doted on these dogs and spent simply fabulous sums from the state treasury, on their maintenance and breeding. When a monk came to visit the king, one of the palace dogs raised such a bark that it had to be removed from the chambers. And this barking was a harbinger of trouble. The monk, wishing death to the king, drove a dagger into his heart. After Henry, the Papillons continued to occupy the honorable place of the favorites of many monarchs, not only in France but also in Belgium, Italy, and Spain. They were even called for a long time “the King’s Lapdog”.

It is interesting that the modern look that the representatives of the breed differ it has practically not changed. This can be judged by the portrait of the royal family, painted by Titian in 1542, which was attended by the royal pets. True, at that time most of the dogs had hanging ears.

At the beginning of the last century, English dog breeders came up with the idea to cross a Papillon with a Spitz and it should be said that this decision was very successful. As a result, the coat of the “renewed” dogs have become healthier and richer, it has a silky shine, and the ears of many representatives of the breed have become erect. So Continental Toy Spaniels with erect ears began to be called Papillon, and with hanging ears – Phalene (from French Phalen – moth). 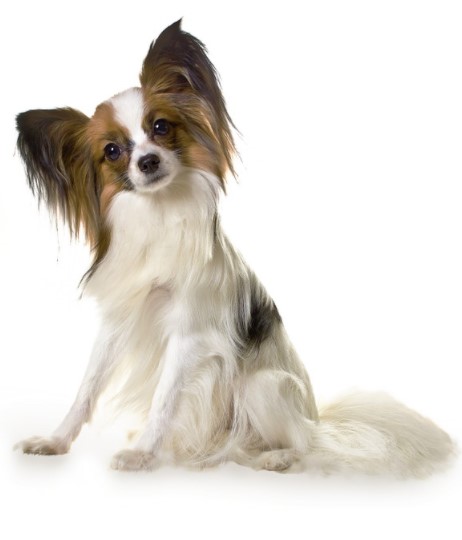 These gorgeous little dogs have a very harmonious physique. The coat grows constantly, has a silky sheen, but not soft, without an undercoat. The Continental Toy Spaniel moves smoothly and gracefully as if emphasizing its “aristocratic” origin. height at the withers should not exceed 28 cm. Two categories are distinguished by weight in the breed:

The head is rounded, the transition from the forehead to the nose is clearly visible. The bridge of the nose is straight. The muzzle is slightly pointed. Scissor bite, well adjusted. Large, almond-shaped eyes are set fairly low, usually dark in color. The eyelid, nose, and lips are always brightly pigmented. The ears are large, slightly shifted back, and located at a noticeable distance from each other, erect, covered with abundant fringe, set wide with rounded tips. If you choose a puppy-“butterfly” by external signs, then his nose should be black, small, and rounded. When viewed from above, it appears somewhat flattened, although it has a straight and even back.

Body length slightly more than height. The chest is wide and deep. Legs not too long, set parallel in front and back. In color, spots of any color are allowed, but white is the main one all over the body, except for the head. A white blaze in the middle of the forehead is welcome. Of medium length, the neck is slightly curved at the back of the head. The tail is rather pubescent and resembles a flowing fountain, originating from the height of the back. In an active state, the dog throws it on its back or thigh. A tail curled up in a ring or half-ring, or lying flat on the back is a sign of a breed defect. 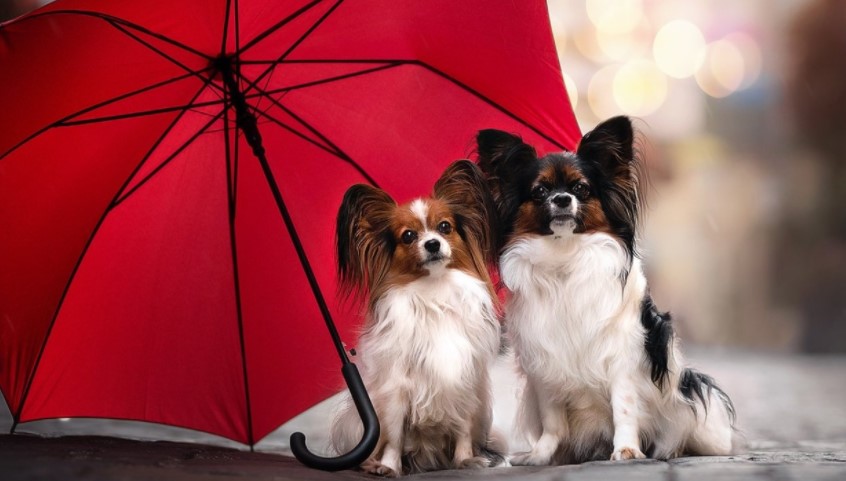 These small dogs have a very lively temperament and are incredibly loyal to their owner. Contrary to popular belief, they are not at all one of those who will observe the world, sitting in the arms of the owner. Papillons are very energetic with an obvious predilection for hunting, however, only for the same miniature living creatures, for example, butterflies, moths, or flies. At puppyhood, they can be timid and too independent, so special attention should be paid to their upbringing and socialization.

The Papillon dog breed has a very cheerful character. They love to play and try to involve everyone around them, both people and animals, in their games, with most of whom they get along well. Only large dogs can be afraid if they are in an aggressive mood. Dogs try to constantly be near the owner, and without attention and communication, they can become irritable. They are so strongly attached to the owner that sometimes this attachment resembles pathology. Therefore, it is better not to leave the Papillon alone for a long time. An animal left alone with itself from boredom can fall into a prolonged depression, and sometimes become seriously ill. When communicating with a pet of this breed, you need to show affection and patience, since he will not tolerate rude and cruel treatment. Overly vulnerable, these dogs are able to take offense even at minor shouts in their address.
Early socialization is key for the Papillon breed. Dogs need to develop a calm, trusting character, and then they will grow into curious, but at the same time calm pets, who react without much fear to something new. 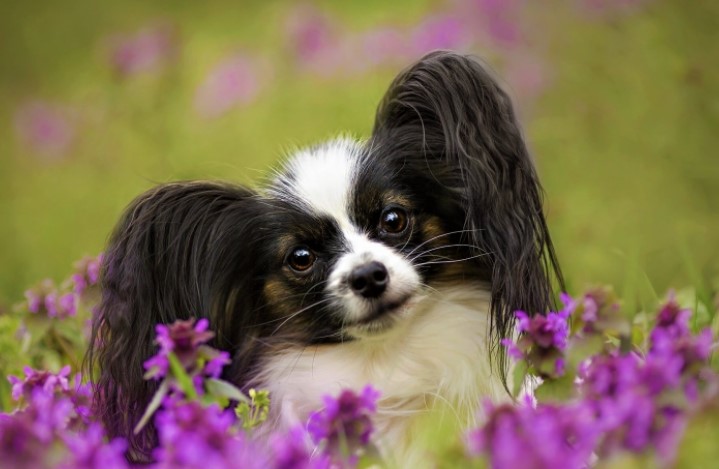 Proper care of puppies of this breed consists of observing several basic conditions:

If we talk about an adult animal, then grooming also does not cause much trouble and does not require additional effort. Caring for a coat is somewhat different from usual, but not too difficult. The representatives of the breed are combed a couple of times a week, during molting – every other day. In addition to the seasonal change in coat, dogs can shed after feeding the puppies. For bathing Papillons, it is important to choose the right shampoo, after which the snow-white wool will not acquire a yellow tint. Any selected product must be very thoroughly washed off.

If the dog is healthy, the coat does not need additional moisture, only in the summer it may be necessary to use moisturizing masks and conditioners. On the belly and on the legs, around the pads, it is recommended to trim the coat for hygienic reasons. The ears are also checked periodically to keep them clean and dry. Remember to brush your pet’s teeth regularly as well as trim the nails. 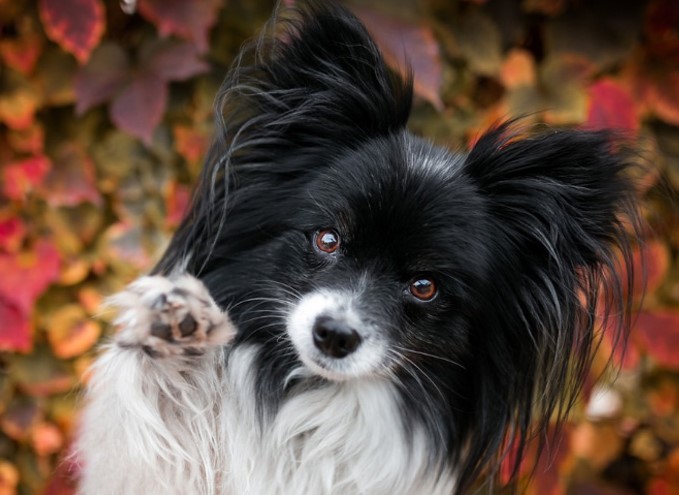 Despite the fact that the breed is very old, it does not have any special hereditary diseases. There is only some predisposition to eyelid volvulus, corneal dystrophy, cataracts, and congenital deafness. Papillons usually do not tolerate anesthesia very well, and in old age they often have fractures. Life expectancy up to 16 years.