Pekingese, like dogs of other breeds, get sick from time to time. The appearance of some diseases can be guessed immediately by the bright symptoms, other pathologies “behave” imperceptibly. We will find out what the Pekingese are most often sick with and how not to miss the deterioration of their health. 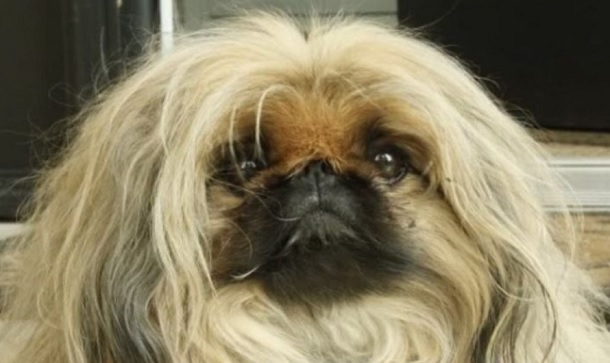 Most often, Pekingese dogs suffer from problems with the eyes, breathing, diseases of the spine, disruption of the gastrointestinal tract, urinary system. Let’s consider each pathology in more detail.

Most of the problems with eyes and vision in general in Pekingese develop due to the fact that most of the eye is not protected by the bones of the skull. This feature is often the reason that the dog easily injures the eyes, “brings” bacteria and infections.

The fact that pathogenic microorganisms have penetrated into the inner layers of the cornea will tell the restless behavior of the dog. Pekingese, suffering from an infectious eye disease, whines, refuses to eat. Tears flow from the eyes themselves, pus is released. Reddening of the sclera is also observed.

Important! It is not worth treating an eye infection without the help of a veterinarian. As first aid, you can try antiseptic treatment, but after that, the pet must be shown to the doctor.

In addition to infections, Pekingese people often experience eversion of the eyelids. When everted, the eyelashes and the edges of the eyelids come into contact with the cornea, which gives the animal severe pain.

Important! The owner will not be able to eliminate the eversion on his own; the dog must be shown to a specialist.

The anatomy that is “responsible” for eye problems is also to blame for the fact that most Pekingese have respiratory diseases. Breathing in air through short and wide nostrils, dogs overcool in winter and overheat in summer.

It is impossible to let the respiratory diseases in Pekingese take their course, most often they are accompanied by:

dry and persistent cough with inflammation of the trachea;

Important! If your pet has at least one of the above symptoms, it should be shown to the veterinarian as soon as possible.

Diseases of the Limbs and Spine

Features of anatomical development left their mark on the spine of the Pekingese. Due to the fact that a rather long body “sits” on short legs, the animal’s spine is exposed to great stress. Because of this, Pekingese are often diagnosed with:

arthritis, which is most often formed due to hypothermia. Increased joints and changes in the dog’s gait will help to suspect arthritis in a Pekingese;

hernia, which can be “earned” by jumping from a height. Symptoms of a hernia are considered to be a lag in the movements of the limbs from the affected sides;

osteochondrosis manifested in severe back pain.

Important! Pekingese who suffers from arthritis or hernia may need surgery.

Dysfunction of the Gastrointestinal Tract

Pekingese are characterized by problems with stools, manifested by both constipation and diarrhea. The first ailment is provoked by malnutrition, the presence of a foreign body in the stomach, and the abnormal development of organs. If, after the dog has taken a portion of the laxative, it does not become easier, the owner should take the pet to the clinic, show it to the veterinarian.

Important! To cure diarrhea, you need to know the exact cause. The exact diagnosis and treatment regimen can only be determined by a specialist.

Damage to the Urinary System

The fact that a Pekingese has kidney and/or bladder problems (cystitis, stones, ICD) will be indicated by a change in his behavior. even the most educated and clean dogs suffering from cystitis suddenly begin to urinate on carpets and upholstered furniture. Blood impurities are observed in the urine.

Important! A neglected form of urolithiasis is treated only with the help of an operation.

Pekingese who have already crossed the threshold of venerable age often have heart problems. In addition, “old people” suffer from problems with vision, hearing, and lose their teeth and hair.

If the owner is attentive and caring to his pet, then most of the diseases are not afraid of that. Most often, the development of a particular pathology becomes the result of poor animal care.