On our planet, you can still find species of animals, the appearance of which has practically not changed over millions of years. These are real “living fossils”. One amazing group of ancient fish that can be found in amateur aquariums will be discussed in our article.

The first representatives of the genus Polypterus (Polypterus sp.) Appeared on our planet in the Cretaceous period (about 60 million years ago). The long history of these fish is indicated by the archaic structure of the skeleton – it consists not of bones, but of cartilage (like sharks and rays). Polypteris, or polypore, are lung-breathing fish. Their evolved swim bladder is very similar to the lung, which allows them to use atmospheric air for breathing. Thanks to this device, the fish were able to crawl from drying out reservoirs to more full-flowing ones. For some time, polyps can do without water, but only until their skin remains moist. In unfavorable conditions, these unusual fish are able to burrow into wet silt to survive the dry season. 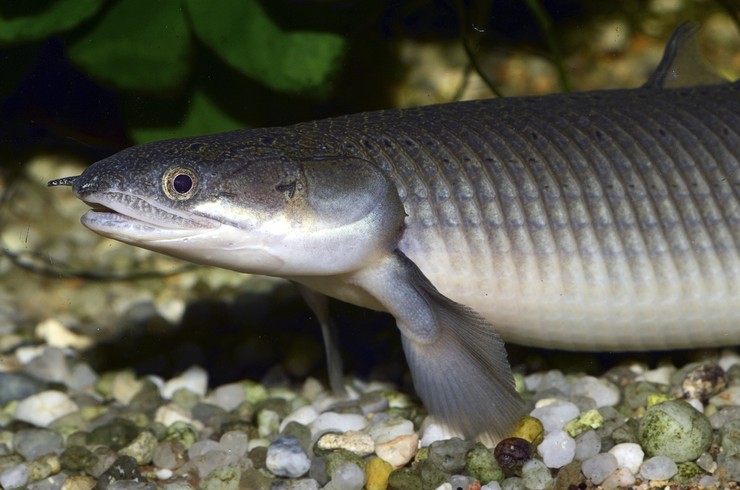 Another interesting feature of polypterus, which speaks of their ancient origin, is the presence of the so-called ganoid scales. Its distinctive feature is the presence in the composition of a special tissue – ganoin, which is second only to tooth enamel in strength.

Very often, polypterus is called a dragonfish for its eel-like body and the presence of many spines on the dorsal fin (up to 18 pieces). In nature, individuals can reach a length of 70 cm, but in aquariums, they rarely exceed 40 cm. 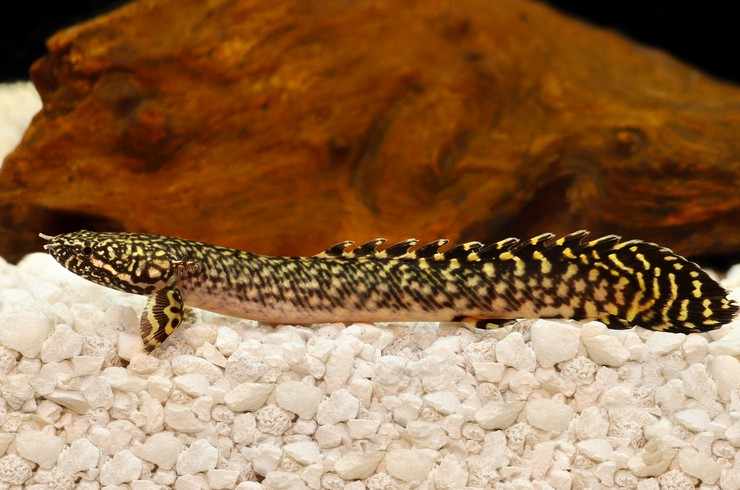 The body is covered with strong rhomboid scales, the caudal fin is oval in shape, the pelvic fins are displaced towards the back of the body. The pectoral fins are fleshy. The mouth is large, the eyes are weak, but the nostrils are well developed, therefore, the polypterus relies on the sense of smell to hunt. Sexual dimorphism is not pronounced.

Africa is the homeland of the multi-performers. They can be found in the upper Nile and the Congo Basin, as well as in numerous lakes and swamps in Western and Equatorial Africa. After the end of the flooding of rivers, they are often found in drying puddles and ditches.

Due to the need to constantly swallow a portion of air, polyters prefer to settle in shallow water. They live mainly in muddy and slow-flowing waters, therefore they have a well-developed sense of smell, which allows them to navigate in space. The fish is a typical ambush predator: the multi-fin awaits its prey in dense thickets and, when the victim approaches it, grabs it with a sharp thrust.

For a comfortable stay of a multi-pillar, an aquarium with a volume of at least 200 liters is required. It must be covered with a lid, as fish tend to sprout. For the same reason, it is necessary to close up as much as possible all the slots provided for the output of hoses or equipment wires. The ability of polypters to squeeze into incredibly tight spaces is amazing. “Swallowing” atmospheric air is a vital thing for multi-piers, so there should always be an air gap between the lid and the surface of the water.

Any soil is suitable for the aquarium, it is best to choose a fraction that will be convenient to clean, because the fish prefer to feed on the bottom, so a lot of waste remains. It is imperative to install a large number of shelters, because most species are active at dusk, while during the day they prefer to hide in shelters. It is desirable to make the light dim. It is very interesting to observe the life of polypters under special blue lamps that imitate moonlight. 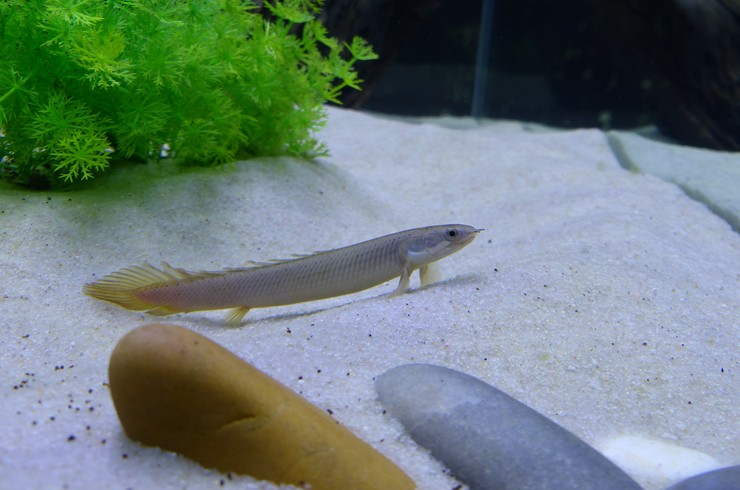 For fish, high-quality filtration and aeration of water are important. Changes of up to 20% of the volume of the aquarium should be done once a week.

The fish are absolutely indifferent to the plants in the aquarium, so almost any species can be planted. The main thing is to fix them well because the active movements of the polypterus can pull them out of the ground.

With good care, the fish can live in the aquarium for up to 15 years.

Despite the fact that the polypterus is a typical predator, it gets along well with many species of fish, and sometimes even shows some “phlegmatic” in relation to its neighbors. The main condition for the selection of roommates is that they should not fit into the mouth of a multi-pen.

Polypteruses get along well with other African fish: cynodonts, black knives, butterflyfish, cichlids of the Great African Lakes. You can add shark barbs, giant gourami, martinis, astronauts to them of a suitable size. Small fish species in most cases will become “live food”.

Polypters can also get along with their relatives. At a young age, they even prefer to keep in flocks, but with age they become territorial. Therefore, to avoid hassles, you need a large aquarium volume and a suitable amount of shelter.

In nature, polypters feed on a variety of invertebrates: insects and their larvae, worms, mollusks, and small fish. In the conditions of the aquarium, they perfectly eat a variety of dry foods. It should be borne in mind that mnogopers feed mainly near the bottom and swallow food whole.

Therefore sinking tablets for bottom fish such as Tetra WaferMix is a good choice for feeding. They quickly sink to the bottom and are small in size, they can easily swallow them.

If pills are not on hand, you can feed these ancient fish with sinking pellets. It is only advisable to choose a larger size so that the polypters are quickly saturated. Take a look at the TetraMin XL Granules.

If you are the lucky owner of a hand-held polypterus who takes food practically from his hands (there are some) or rises to the surface behind him, then you can safely feed your pets with floating sticks for cichlids Tetra Cichlid Sticks. 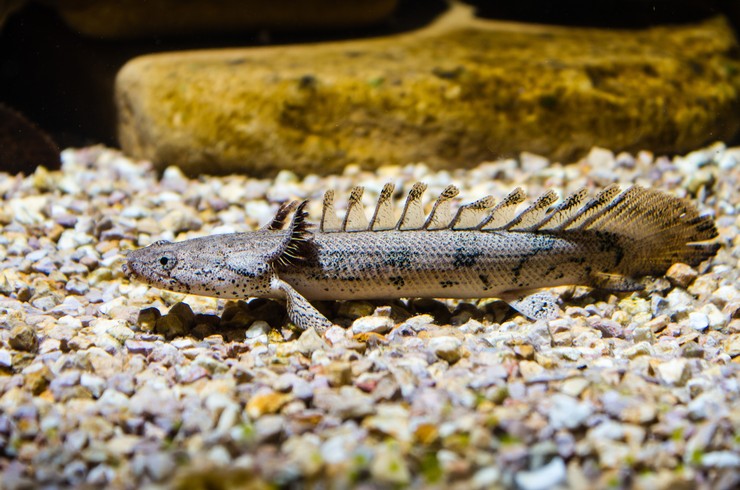 You must choose the feeding mode for the multi-feathers yourself. These fish are prone to overeating, so do not get carried away with large portions of food.