A small, charming Pomeranian hides a multifaceted personality. Energetic and curious representatives of the breed tend to be aware of everything that is happening around them.

In the house, a pet’s favorite place can be a window, from where the dog will be good at observing what is happening outside. Pomeranians are suitable for active people who are ready to play and devote enough time to their pets. 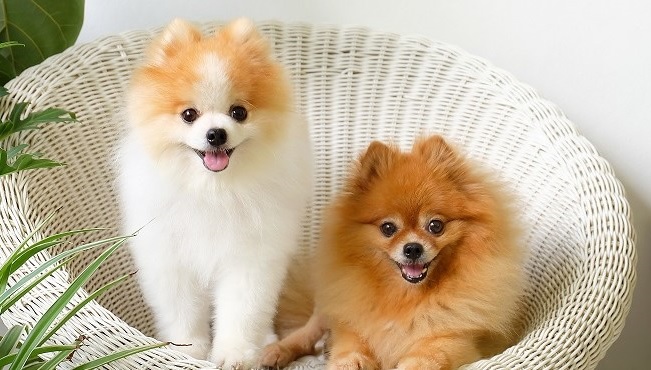 One of the temperament traits of the Pomeranian is affection for family members. Dogs are ready to spend all the time with people who love them, while not just sitting next to them, but actively playing or just fussing at their feet. They are very bored if they are alone, even for a short time. Bored, animals howl and bark, running around the room or rooms, looking for the owner or looking at the door through which he came out. By the way, barking can be a problem, especially if the dog is often left alone. A close bond with the owner can result in jealousy of other animals or small children.

They get along well with older children, especially if the children treat animals with love, without being rude. Children should understand that they need to respect and observe the boundaries of the dog’s territory, not to unceremoniously invade its territory and take away toys, not to torment or tease. Otherwise, representatives of the breed may bite. Therefore, it is not recommended to leave small children with a dog of this breed alone, since small children can irritate the pet with their behavior, in addition, they can injure a fragile dog.

The independent temperament of the Pomeranian can manifest itself in certain situations. Clever and not inclined to obey blindly, pets tend to get their way, for example, to attract the attention of the owner, showing cunning. Strong-willed representatives of the breed can show dominance, but it is impossible to allow a dog to consider itself a leader, because this leads to serious problems in the future, for example, ignorance, disobedience. It is very easy to miss the moment and allow the dog to feel in charge because cute creatures with such adorable looks can be forgiven and inferior in many ways.

Self-confident by nature, Pomeranians can feel like the owners of the house in which they live with the owner and his family. As a result, strangers who come into the house may bark at, but not come close.

On the street, they will not approach every passer-by, and people who decide to get to know each other will be suspicious. Well-bred and socialized dogs respond adequately to strangers. Representatives of the breed are brave enough to defend themselves, namely to bite if they are pestered by strangers.

Pomeranian and Other Animals

Pomeranians get along well with other animals, the strongest bond occurs in animals that grew up together. Sometimes there may be minor skirmishes between males, but in general, the representatives of the breed are not aggressive either towards each other or towards other smaller animals.

The training of the Pomeranian is quite complicated and lengthy, and this is not due to the fact that the representatives of the breed are stupid, but to the fact that the Pomeranians like to think of themselves as the main ones, to decide for themselves what to do. Dogs of this breed are capable of training, but only with the manifestation of firmness and perseverance on the part of the owner. Classes must be interesting and short and must be supported by encouragement. It is important to maintain consistency in training without letting the dog decide when to end or what to do. Smart dogs can show disobedience, and when they feel like leaders, they can manipulate the owner, showing disobedience and aggression.

Socialization also matters, especially in the first 16 weeks of life. Socialized pets will not be afraid of sounds, other animals, and will not show aggression towards strangers.