The nano aquarium is a fashionable trend in recent years in the aquarium industry. The number of species that can feel comfortable in small volumes is not so great, but most of them have a bright and unusual color. You can find out about one of these fish, which has recently become available to amateurs, from our article.

Blue-eyed “Red neon” (Pseudomugil sp. “Red neon”) is a relatively new species in the aquarium hobby. It first appeared on sale in 2011. At the same time, one and the same species met under various names, the most famous of which were pseudomonal pascal and pseudomonal irian. Many aquarists considered the fish to be a selection form, but in reality, it turned out to be a new species, closely related to Gertrude’s blue-eyed.

Pseudo Neon Red has an attractive appearance. The size of the fish in the aquarium does not exceed 3-3.5 cm. The body is slender and elongated. The fins are translucent, wide, in males in a chaotic manner they are strewn with oval dark spots, often there is a yellow edging along the edges. The two dorsal fins are close to each other. The tail is yellowish or white in color. In males, the dorsal and pectoral fins are significantly longer than in females. 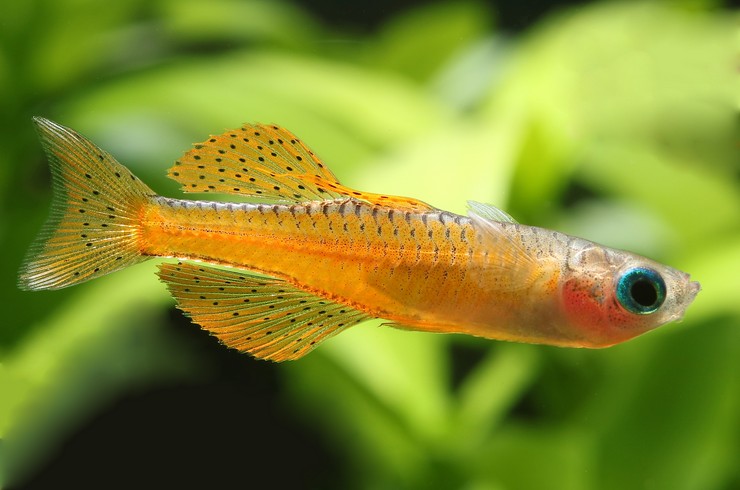 The main color of the body of the pseudomugila Paskai is orange, along the back there is a bright blue stripe, reminiscent of that of a popular fish – red neon. The eyes have a shiny blue iris, which is why the fish got its name.

Females are much more modestly colored, do not have elongated fins and spots on them.

The first scientific description of the pseudomugil pascal was made back in 1983. This attractive fish lives in the Fly River basin on the island of New Guinea. In appearance, the fish is very similar to the popular blue-eyed Gertrude but differs in color and fins. Also, the discovery of a new species was confirmed by DNA analysis.

Pseudomugils prefer slow-flowing rivers and streams with dense vegetation. The water in them is usually cloudy and has a characteristic “tea” tint due to the high content of humic substances. Fish live in schools near the coastline, where there are many natural shelters from tree roots.

Pseudomugils Paskai is schooling fish. It is best if the aquarium contains 8-10 individuals. This will not only make the life of the fish more comfortable but also allow observing the natural competition of males for the attention of females. At the same time, they will shine with all their colors. 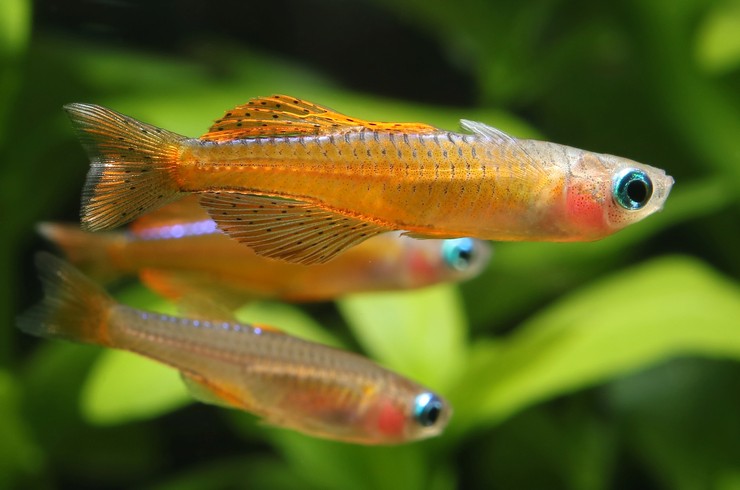 The recommended minimum volume for keeping fish is 40 liters. The type and size of the soil do not matter, but it is better to choose dark pebbles, with which the fish will look more contrasting. The presence of natural decorations is encouraged: snags, stones, grottoes. But we must not forget about the swimming space. The lighting should be dim.

Ensure effective filtration (but not strong currents) and aeration in the aquarium. Fish love established aquariums with an established biological balance; it is strongly discouraged to plant them in “immature” aquariums. Change up to 25% of the water weekly.

It is imperative to plant live plants in the aquarium. Any species will do, the fish are absolutely indifferent to vegetation. It is best to plant them in dense groups, leaving areas for swimming. Floating plants (riccia, pistia, etc.) are placed on the surface of the water to create a shadow.

The same small species are perfect for cohabitants with this peace-loving fish: other blue eyes, galactic micro-assemblies, Endler guppies, etc.

It is categorically impossible to add to large and aggressive fish if you do not want your pseudo-mucus to become live food.

Pseudomugil Paskai gets along well with shrimps from the Cardin and Neocardine genera, therefore, it can dilute the live population in shrimp pots.

In nature, pseudomugils Pascal feeds on zoo and phytoplankton, as well as small invertebrates. At home, they quickly get used to feeding with dry food. The main thing is that it is nutritious, balanced, and suitable for feeding fish with a small mouth. Tetra Micro Crisps are a good choice – chips with a diameter of 1.7 to 2.5 mm float to the surface and slowly sink to the bottom. The food combines plant and animal ingredients and is enriched with carotenoids to enhance its natural color.

Alternatively, Tetra Rubin Flakes can be used. It also contains all the essential nutrients and vitamins, and natural color enhancers will brighten the fish. To make it more convenient for pseudo-murals to eat food, it is recommended to grind the flakes a little with your fingers.

Tetra FreshDelica Krill – small invertebrates in a nutritious jelly will be an ideal complementary food for pets.

Breeding blue eyes “red neon” is not difficult. It is possible to even without creating special conditions if the aquarium contains a good flock, and there are many plants on the surface in which fry can hide. But for maximum survival of the offspring, it is better to organize a separate spawning aquarium, at the bottom of which it is necessary to plant bunches of moss or small-leaved plants. The aquarium must be equipped with an air-lift filter. 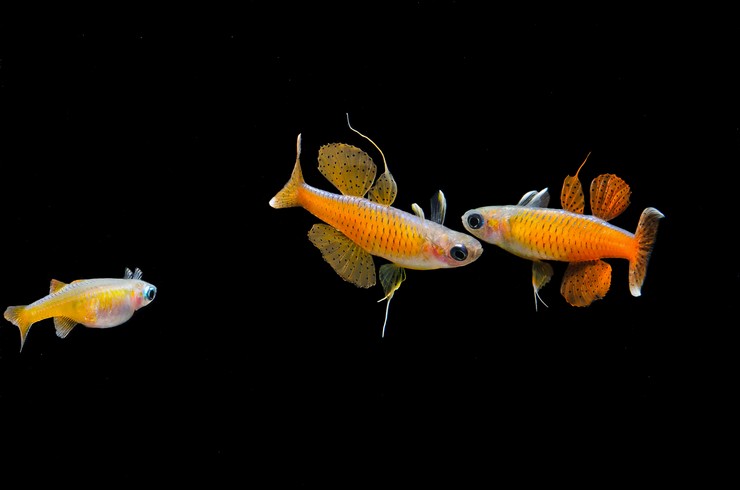 Sexual maturity occurs between 12-18 months of age. One dominant male is able to fertilize several clutches of eggs, therefore one male and several females are planted. Spawning, which lasts for several days, is stimulated by an increase in temperature. Females lay eggs among the thickets of plants. After that, the producers must be planted, because they care for the offspring in fish is not expressed.