The world of cichlids of African Lake Malawi is striking in its grandeur. The list of even described species and color forms is simply huge, in addition, most of the lake ichthyofauna has not yet been studied by scientists. In our article we will tell you about a frequent visitor of cichlids – the pseudotrophyus zebra – a fish that surprises with its color and behavior, while, despite the name, it often does not have stripes on its body.

The pseudotropheus zebra (Maylandia zebra) is a freshwater ray-finned fish from the Tsichlov family. According to the modern classification, the fish belongs to the genus Maylandia, but the traditional name – pseudotrophyus, under which it first came on the market, was firmly entrenched in it.

This species belongs to the Mbuna group. Translated from the language of the local natives, this means “fish living by the rocks.” This name accurately reflects the main ecological feature of the fish that make up the group. They live near steep rocky shores, the territories of which are poor in food resources. This led to a special food specialization (fish scrape off algae from stones), increased territoriality, and a special way of raising offspring (incubation of eggs in the mouth).

It should be noted that the characteristic stripes, which gave the name to the species, have only representatives with a “classic color”. But there are fish and completely without stripes, for example, completely white or orange. 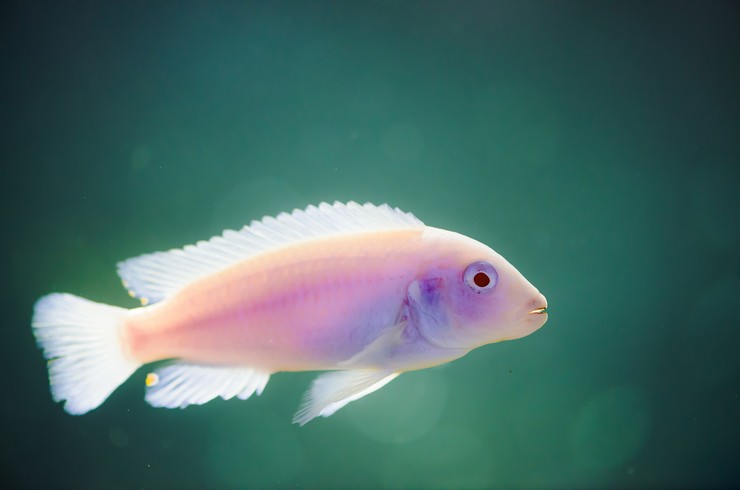 Different types of pseudotrophies can interbreed with each other, therefore, for these fish, the question of maintaining the purity of the breed is acute.

The pseudotropheus zebra has a body shape that is characteristic of most cichlids of the Mbuna group. The body of the fish is oval, oblong. The head is large, with a high forehead and large eyes. The mouth is terminal with fleshy lips, inside you can see teeth, which are a device that allows you to scrape off algae from rocks. 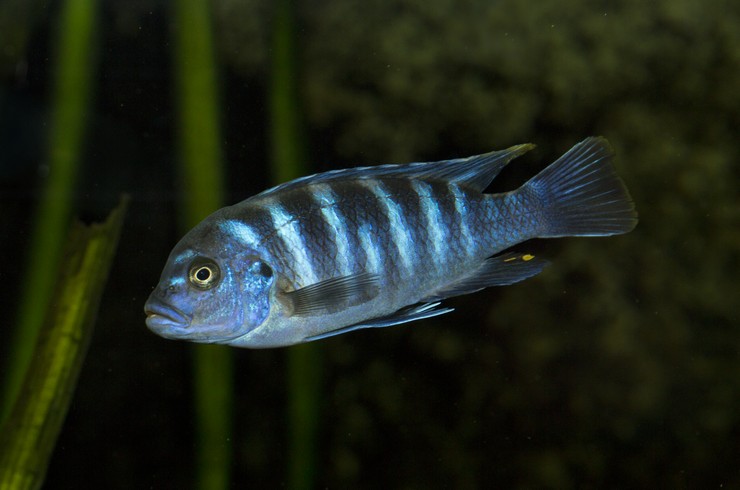 The usual size of a pseudotrophyus zebra in an aquarium is 10-11 cm. The color of the species is unusually diverse (this is called polymorphism). More than 50 natural color forms are known, of which the most common are: blue, white, red, yellow-orange. Some forms have pronounced dark transverse stripes, which gave the fish its specific epithet, while others have spots scattered over the body. It should be noted that only the most experienced aquarists and breeders can determine the true shape of a fish.

The life span in an aquarium is about 8 years.

The pseudotrophyus zebra is endemic to Lake Malawi in Africa. It has a tectonic origin because it was formed at the place of divergence of lithospheric plates. The lake is relatively isolated from other water bodies in Africa, which led to an outbreak of speciation that continues to this day. The waters of the lake are not rich in food resources and are saturated with minerals and have high rigidity. 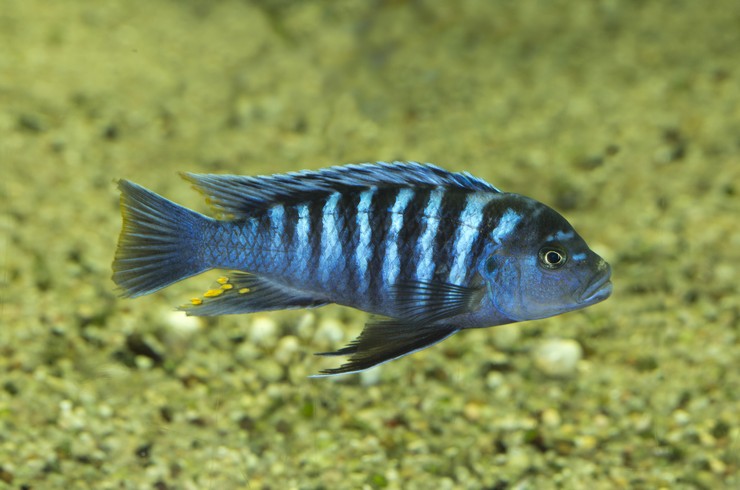 Given the increased territoriality of the zebra pseudotrophyus, it is best to keep these fish in small harems from a male and several females. An aquarium of 150 liters or more will be enough for them. If you want to keep several males, then the volume of the aquarium will have to be almost doubled in order to minimize fights for the territory.

Zebra pseudotrophies look most impressive in aquariums that imitate the natural biotope of Lake Malawi: sandy soil, several large stones, and the absence (or minimal number) of living plants. It is important to create a variety of different shelters with the help of decorations – this will help females hide from annoying males.

Of living plants, only species with hard leaves are suitable: anubias, cryptocorynes, ferns.

It is very important to provide clear oxygen-rich water to pseudotrophies. It is recommended to equip the aquarium with an efficient external filter and a powerful compressor. Zebra pseudotrophies are tropical fish that love warm water, so be sure to install a suitable thermostat in the aquarium. 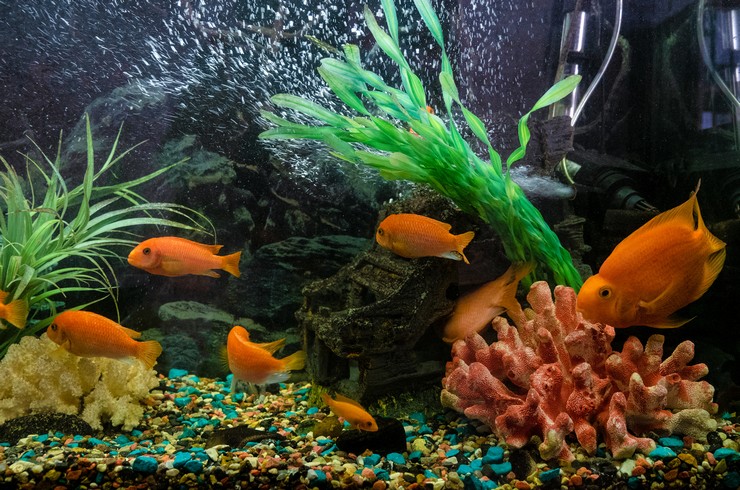 Every week in a Malawian cichlid tank, a 20% water change is required. This will avoid the accumulation of excess organic matter, which can cause an outbreak of algae and even poisoning of fish. The most popular source of water for water changes is the central water supply. Unfortunately, the water flowing from the tap is not suitable for fish life, and in some cases even dangerous. For example, chlorine compounds can kill your pets. The popular water treatment method – sedimentation – will not be the best choice, because it cannot affect chlorine compounds or heavy metals. Therefore, it is best to prepare the water before adding it to the aquarium with the Tetra AquaSafe conditioner, which will not only eliminate chlorine, its derivatives, and heavy metals but also enrich the water with useful vitamins and minerals. The remedy acts instantly, there is no longer any point in defending water.

In nature, zebra pseudotrophies live in water with high hardness and pH, shifted to the alkaline side. Therefore, it is necessary to create similar conditions in the aquarium.

Zebra pseudotrophies, like most representatives of the Mbuna group, are extremely territorial and quarrelsome fish. Therefore, a species aquarium would be ideal. Nevertheless, it is possible to keep fish in a common aquarium, while it is best to choose proportionate Malawian cichlids as neighbors. Ideally, these fish should live together from a young age, this will noticeably increase their loyalty to each other. It is also important to observe the sex composition – there should be more females than males. 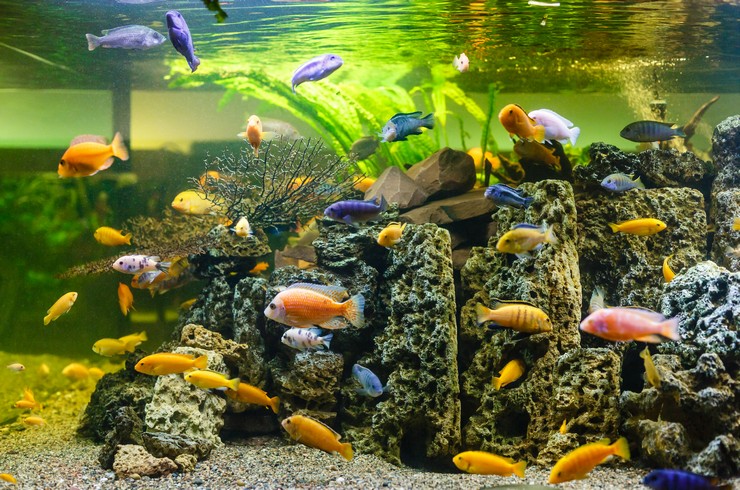 Keeping small fish species together with pseudotrophies is not worth it, cichlids will sooner or later use their teeth, which serve not only to get food.