The history of the pug breed goes back centuries. 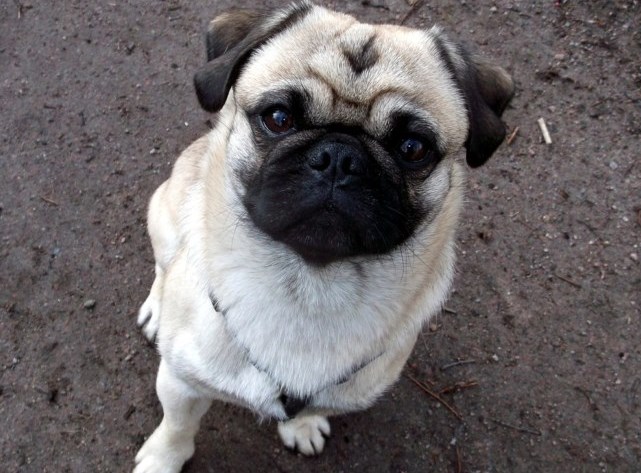 They were originally bred in China BC. Presumably, the ancestors of the pugs were small Sichuan dogs, bred by Tibetan monks, who were also called the heavenly lions of the Buddha. They were believed to bring happiness to the owner. Their statues were installed on the thresholds of temples to protect religious buildings from evil spirits.

Pug dogs were first mentioned by Confucius (551 BC). And even then, breeding work was purposefully carried out, for which a special “position” was introduced – chiangqian. The pattern that forms the frontal folds of pugs was considered a hieroglyph and was called the imperial sign. This feature was consolidated and strengthened.

The Great Silk Road paved the way for these dogs to many Asian countries, where they won the favor of many rulers.

Pugs came to Europe (more precisely, to France) with the Turkish fleet in 1553. Thanks to the Dutch East India Company, these dogs soon became popular in the Netherlands, where their color was likened to the colors of the ruling house of Orange. When William III of Orange became king of England, he and his wife Maria II brought pugs from the Netherlands in 1689. For about two centuries, the breed was as popular as the poodle is today. It was considered a sign of good taste to have this little dog.

But gradually pugs became less and less. They began to be considered the personification of philistinism. So in 1864, for the British Queen Victoria, who wished to have representatives of the breed, it was with difficulty that they found one dog.

However, 20 years later (not without patronage from the Royal Household of Great Britain) a Pug Lovers Club was formed and efforts to improve and standardize the breed produced the elegant little dog we know today.

In the Russian Empire, pugs were first seen at the end of the 19th century, but the hurricane of revolution swept them from the Russian stage for the coming decades. And only in the 80s of the last century in the USSR they began to professionally breed this breed. Nurseries, clubs were opened, exhibitions were held.

Now pugs are one of the most widespread breeds in Europe, the USA, and Australia.