Corridors are some of the most famous and popular aquarium catfish. These fish are extremely prized for keeping the bottom clean in their places of residence. Most of the common corridors are large fish that can grow up to 8-10 cm, but there are interesting exceptions – these are dwarf corridors, the most famous of which is called pygmy corridors. In our article, we will tell you about the features of keeping these babies at home.

The pygmy corridor (Corydoras pygmaeus) is a freshwater ray-finned fish from the Kallikhtovaya or Armored catfish family. The main feature of this species, as the name implies, is its miniature size. The adults of the pygmy corridor are barely 2-2.5 cm long. This makes them good candidates for keeping in nano aquariums.

The body color of this catfish does not play with a riot of colors, however, the strict and modest coloring makes it unusual and sophisticated. Unlike their relatives, who prefer to be closer to the ground, the pygmy corridors swim in the middle of the aquarium. The body of these fish is more elongated in comparison with other corridors, and if a flock of pygmy corridors is swimming in the aquarium, then from afar they do not look like catfish at all. Fish love to rest on the wide leaves of aquatic plants.

Another unusual feature of this catfish is the ability to direct its eyes downward, which helps it in exploring the bottom.

Pygmy corridors are unpretentious in care and get along well with peaceful proportional fish. From the side of the corridor, the pygmies may seem “jerky”. But this is just their feature, due to the fact that they change the direction of movement with the help of sharp flapping of the pectoral fins.

Intestinal respiration is a characteristic feature of all corridors. The essence of this process is that part of the intestines of the fish can hold atmospheric air, and due to the large number of vessels that surround this section, the air can be used for breathing. Sometimes you can watch the fish rise to the surface of the water and take a “breath” of air. Do not hinder this process in any way – it is vital for the corridors. 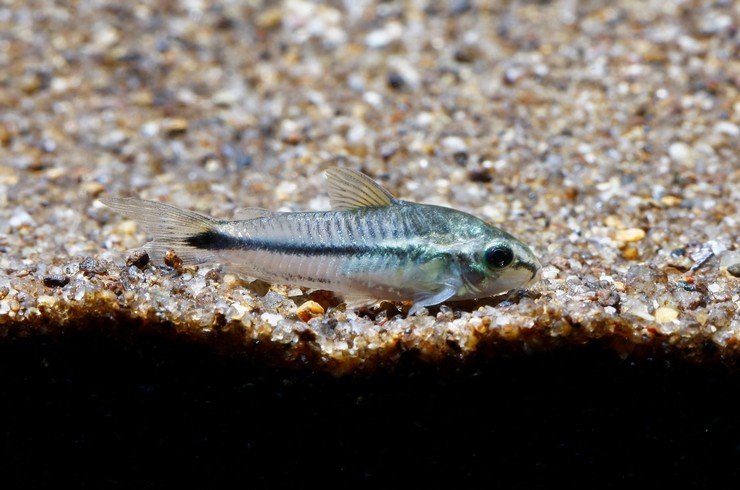 The corridor pygmy has an elongated and slightly flattened body. The line of the abdomen is straight. The “hump” characteristic of the corridors on the head is strongly smoothed. The fins are transparent, the abdominal and pectoral fins are especially developed. The tail is two-lobed, there is an adipose fin. The mouth is small, surrounded by two pairs of sensitive antennae. On the sides of the body, there are rows of bone plates that create a kind of shell.

The maximum size in an aquarium rarely exceeds 2-2.5 cm. Females are larger than males and have a more rounded abdomen. 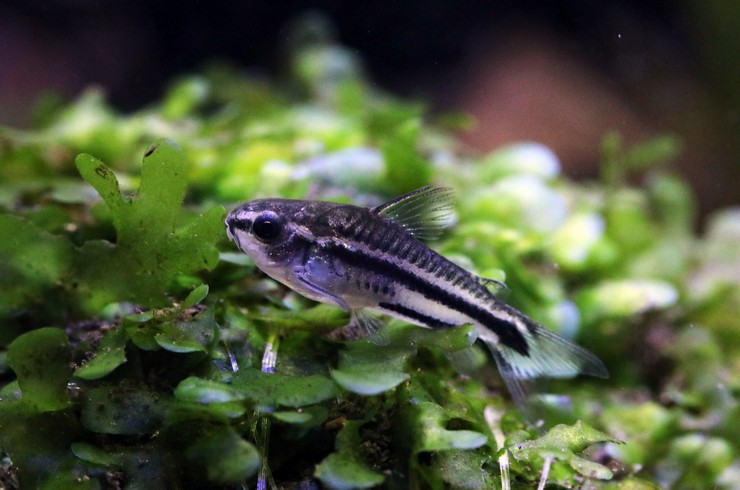 The historical homeland of the pygmy corridor is South America. The fish originates from the largest tributary of the Amazon – the Madeira River, which flows through Brazil. It occurs mainly in numerous tributaries and small backwaters, avoiding the main river bed. Fish do not like strong currents.

The pygmy corridor prefers places with soft sandy or pebble soil and numerous thickets of aquatic plants. Catfish find shelter among the roots and fallen branches of trees. During the rainy season, when rivers overflow their banks, the fish are often found in flooded areas of the rainforest. Corridors live in large flocks. 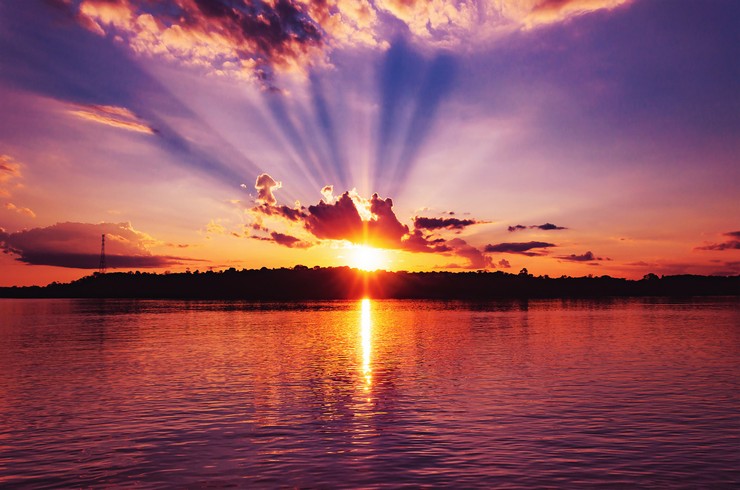 Due to the miniature size of the corridors, pygmies can be kept in nano aquariums with a volume of 30-40 liters. Since, unlike their relatives, pygmies like to swim in the water column, in addition to areas with dense thickets of plants in the aquarium, you should provide space for free swimming. The corridors must have access to the water surface, this is necessary for periodic filling of the intestines with air. 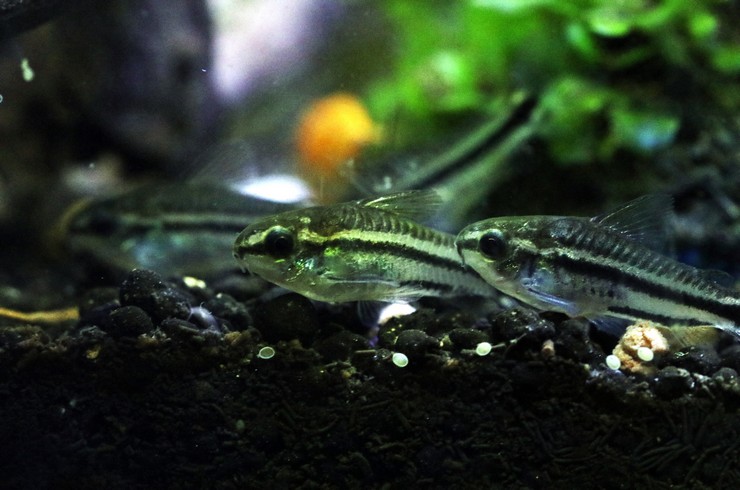 It is best to use sandy or small pebble soil with rounded edges. This will exclude possible damage to the sensitive antennae of miniature catfish, which they use to find food at the bottom.

It is better to decorate the aquarium with stones and snags. The latter will be excellent hiding places and go well with living plants. Pygmy corridors like to rest on the leaves of plants, so broad-leaved species are well suited – Echinodorus, Cryptocorynes, Anubias. 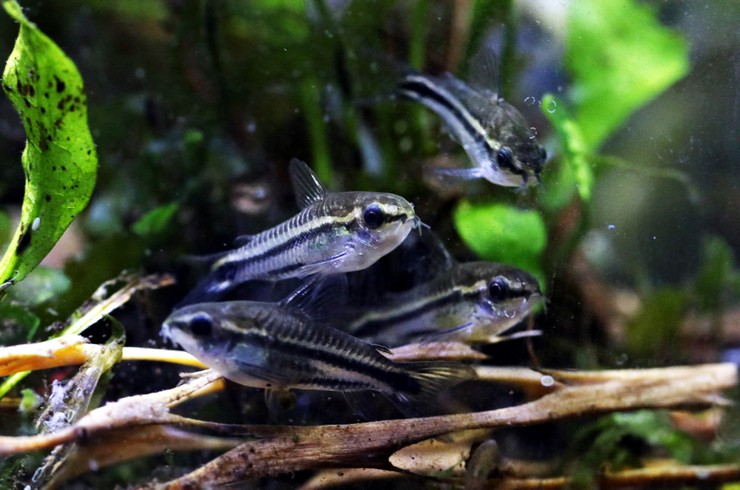 In an aquarium with pygmy corridors, it is important to provide quality filtration and aeration. Once a week, you should replace 20% of water with fresh water, which will exclude the accumulation of toxic metabolic products. Tap water, which is most often used for changes, is completely unsuitable for the life of fish because it can contain a number of hazardous compounds such as chlorine or heavy metals. Use the Tetra AquaSafe conditioner to instantly make the water safe in the corridors.

A huge plus of the pygmy corridors is their unusually calm nature. Of course, having such a size it is difficult to pose a threat to anyone. But catfish can suffer from other fish, so you should carefully approach the choice of neighbors.

The best roommates for corridors will be such small species of fish: small irises, tetras, neons, rasbora, nannostomuses, apistograms. Corridors get along well with freshwater shrimps: cherries, crystals, filter feeders. 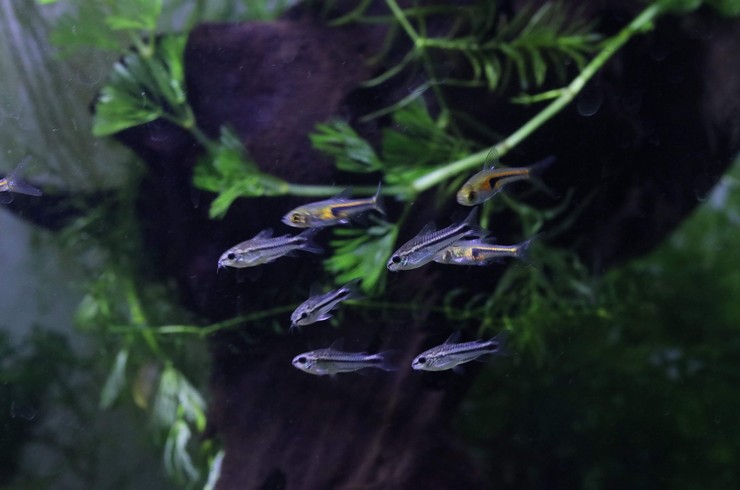