Most of the cases with beach suction are most likely just sand accumulation by the tide, rains, waves … but let’s still remember about quicksand!

So don’t park on the beach … 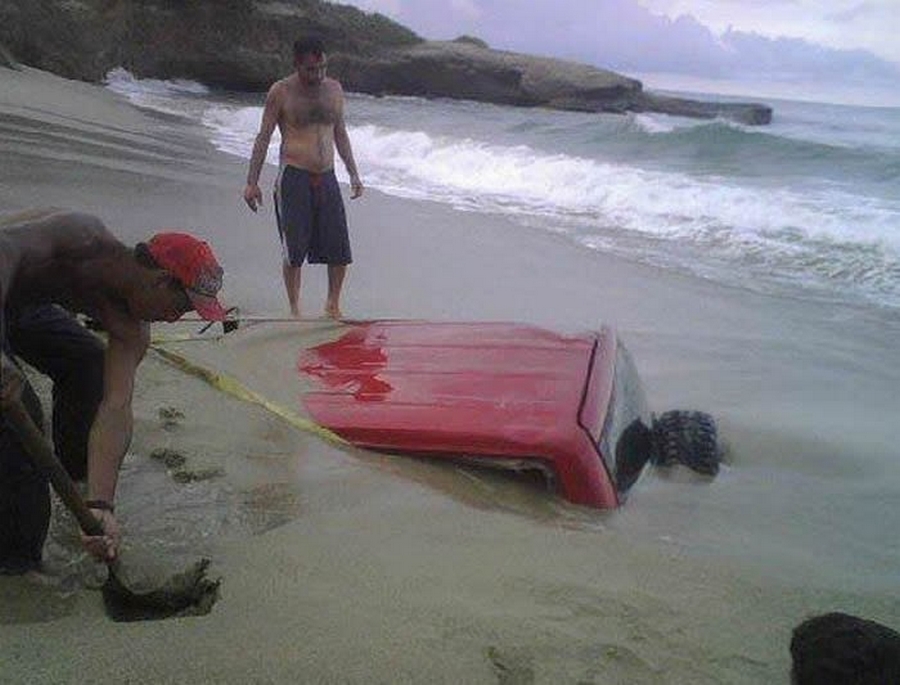 Researchers have repeatedly undertaken to study the phenomenon of quicksand, and gradually the situation with them became more or less clear. Undoubtedly, the properties of wet sand significantly depend on the amount of water contained in it. Moistened grains of sand easily stick together, demonstrating a sharp increase in adhesion forces, which in dry sand are due only to surface irregularities, and therefore are very small.

The surface tension forces of the water films surrounding each grain of sand make them stick together. In order for the grains of sand to stick well together, water must cover the particles and their groups with a thin film, while most of the space between them must remain filled with air. If the amount of water in the sand is increased, then, as soon as the entire space between the grains of sand is filled with water, the forces of surface tension disappear and a mixture of sand and water with completely different properties is obtained. Thus, Quicksand is the most common sand, under which there is a fairly strong source of water at a depth of several meters. 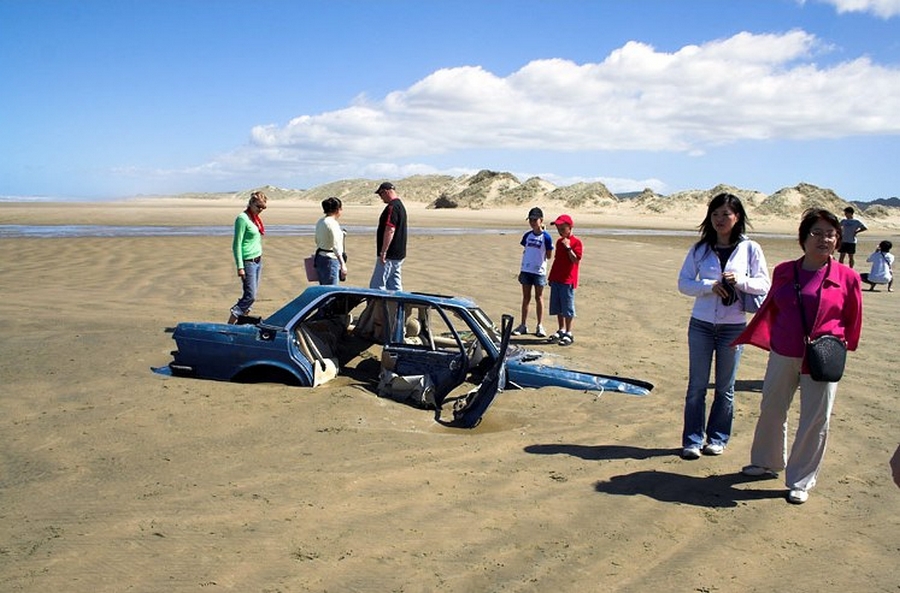 Quicksand is most commonly found in hilly or tidal environments. Moving from the mountains, streams of water move along channels cut through the dolomite and limestone rocks. Somewhere it breaks through a stone and rushes upward in a powerful stream. If a layer of sand is encountered on the way, then the flow of water coming from below can turn it into quicksand. The sun dries out the top layer of sand, and a thin, hard crust forms on it, on which grass may even have time to grow. The illusion of well-being and calmness will instantly evaporate, as soon as you step on it, the soil will float from under your feet.

Why does a person fall into quicksand? The point is in the resulting structure of the arrangement of grains of sand. The stream of water coming from below whips up a loose pillow of grains of sand, which is in relative equilibrium for some time. The weight of a traveler who has wandered into such a place brings down the structure.

The grains of sand, redistributing, move along with the body of the victim as if sucking the poor man into the soil layer. After that, the structure of the sand around the unfortunate person becomes completely different – tightly pressed wet sand grains to form a trap due to the surface tension of the water layer. When you try to pull the leg out, a vacuum is formed, pulling the leg back with tremendous force. The effort required to lift a leg in such a situation is comparable to the weight of a car. If the sand were dry, then with a slow motion, the air between the grains of sand would first come to the vacant space, and then the sand itself, crumbling, would fill the gap. A person buried even up to his neck in ordinary sand may well get out of it on his own (anticipating objections, I remind you that in the White Sun of the Desert the hero was previously tied up). In quicksand, a viscosity comparable to thick jelly will not allow you to do this.

The density of quicksand is about 1.6 times greater than the density of water, but this does not make it possible to swim in it. Due to the high humidity, the sand is sticky, and any attempt to move in it is met with strong opposition. The slowly flowing sand mass does not have time to fill the cavity that appears behind the displaced object, and a rarefaction, a vacuum, arises in it. The force of atmospheric pressure seeks to return the object to its original place – it seems that the sand “sucks” its prey. Thus, moving in quicksand is possible, but only extremely slowly and smoothly, since the mixture of water and sand is inertial with respect to rapid movements: in response to a sharp movement, it seems to solidify.

For the formation of quicksand, the movement of water is necessary from the bottom up – which provides a tide or underground flow. In the Sahara desert, quicksand is formed in the zone of the existence of a large underground river, which people did not know about until the beginning of the era of sounding the structure of the earth’s surface from a satellite. Sometimes, the cause of such a zone can be an earthquake. Or human activity. Once, while trying to drain the area of ​​construction of the foundation of a high-rise building, a huge pump, sucking water through a well, went underground. Quicksand is often encountered by builders of buildings and subways in St. Petersburg, where the soil is oversaturated with water. In these places, they are called quicksands. 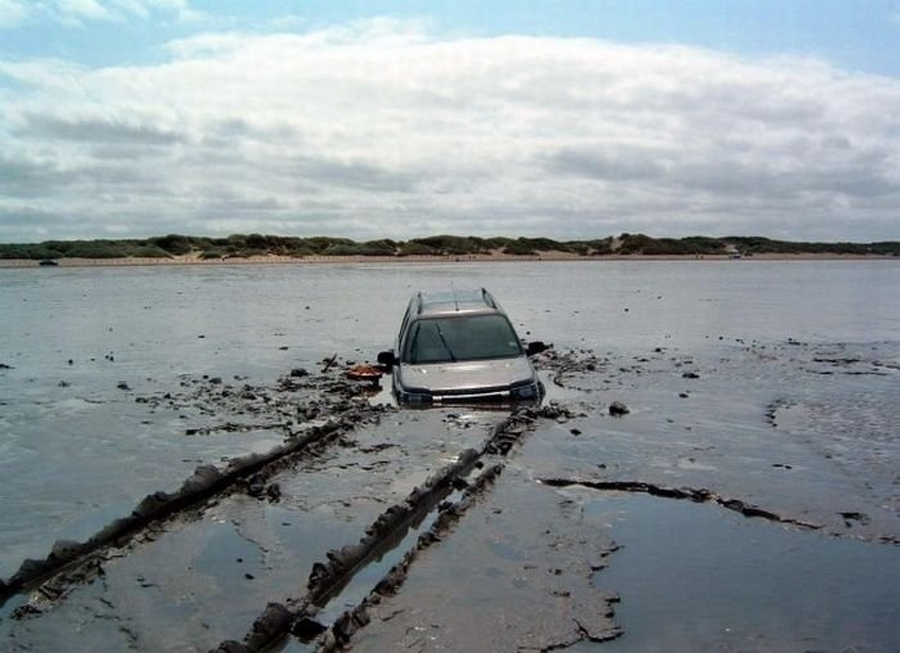 Lonely travelers or animals are not the only victims of quicksand. There is a place where the sands swallow ships: Cape South Foreland in England (Goodwin Shallows) is internationally known as the “ship graveyard”. On a long sandbank, there are shipwrecks immersed in the sand. The sands tenaciously hold the victim, and it is almost impossible to save the ship, and sometimes the crew. Once a victim of the Goodwin Sands was the steamer Gelena Modjeska, whose cargo was estimated at $ 3 million. For four days, eight rescue tugs tried to rescue the steamer, but on the fifth day the Gelena Modjeska broke in half, and the cargo and the ship were lost in the sands. And in 1954, in this place, quicksand sucked in a whole lighthouse, warning ships of danger. The tower has completely sunk into the sand.

But this happens not only with cars:

This is a photo story about the rescue of a horse named Astro, who got into a bog on the shore of a bay near Melbourne. For three hours, her mistress Nicole tried to keep Astro on the surface, while she gradually sucked in the dirt. Meanwhile, the tide began … A little more and the horse may die! … 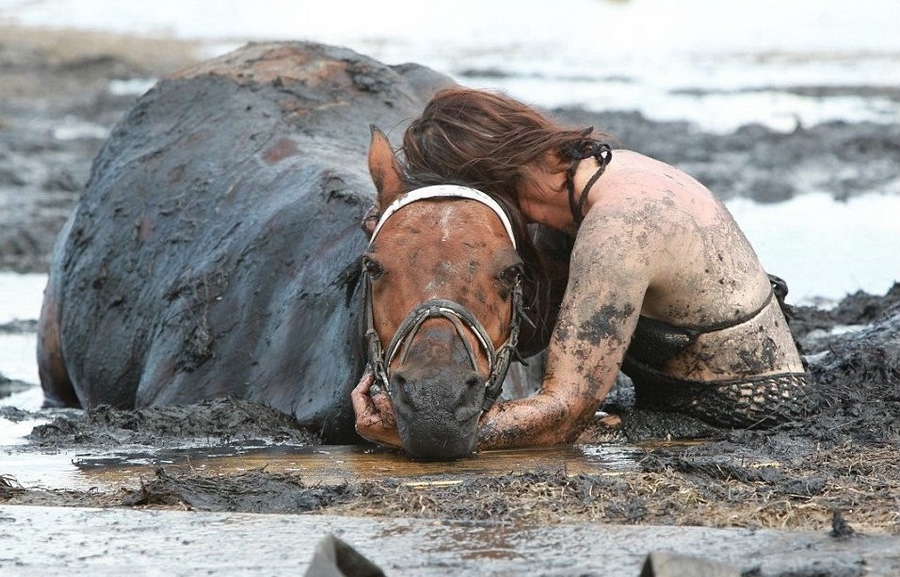 Nicole Graham and her young daughter went on an 18-year-old horse named Astro for a horseback ride along the coast south of Melbourne. Suddenly the horse stumbled into the mud – the so-called “floater”, a quagmire near the bay. 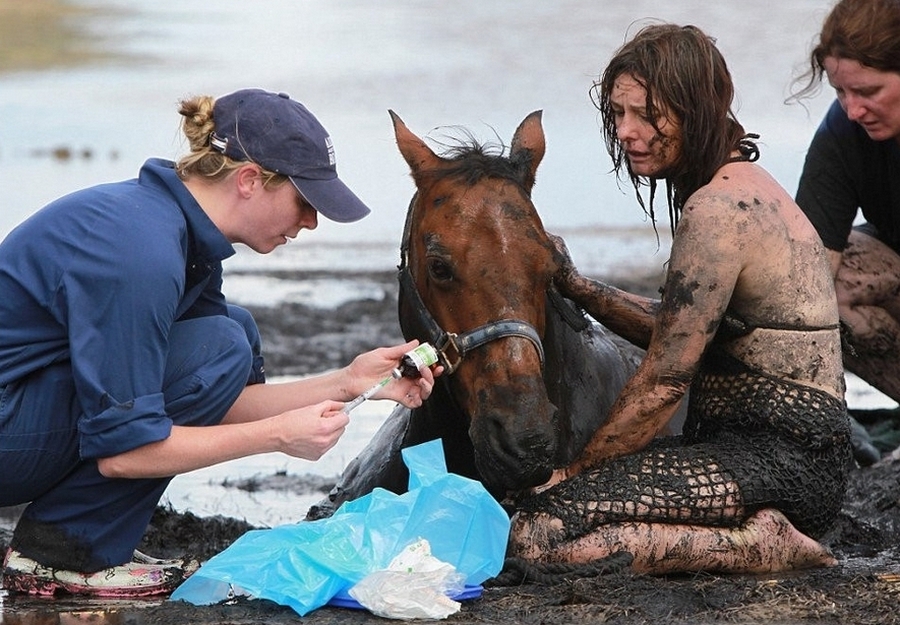 Nicole took her daughter to safety and then returned to Astro. An animal weighing half a ton was gradually sucked into the bogs. 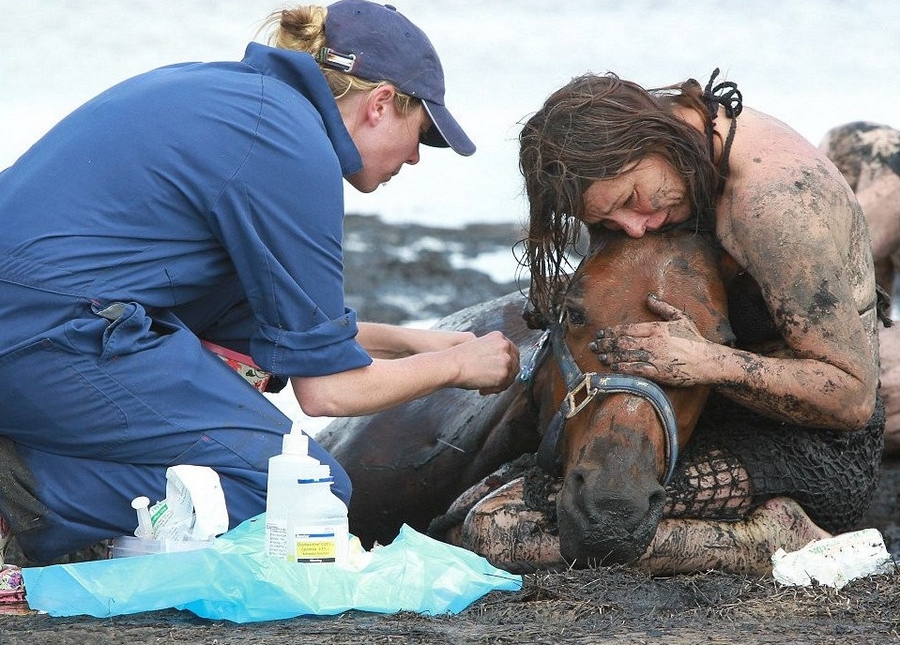 Astro quickly drowned, and all the attempts of her mistress to pull the horse out of the bog led to the fact that it was even more sucked in. In addition, the tide began, and very soon the horse could drown. 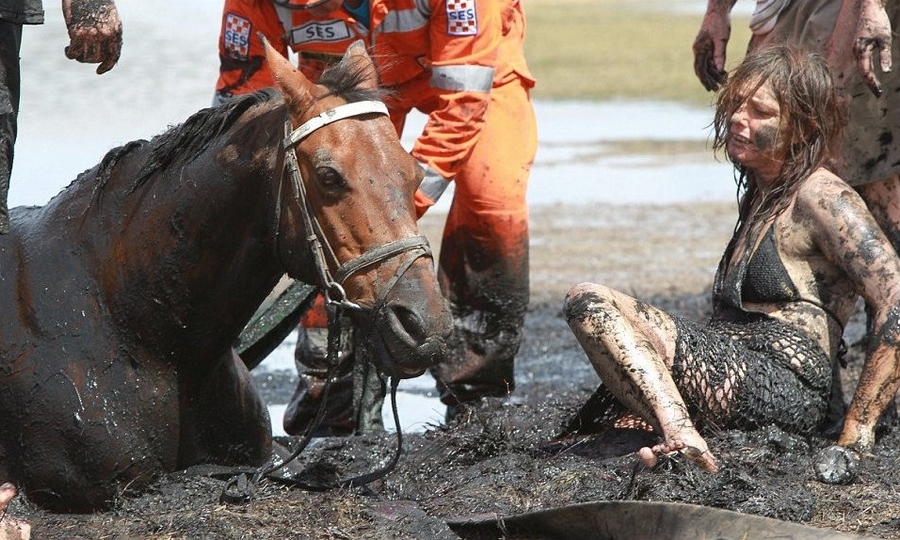 Nicole’s daughter ran to their car and called for help. Nicole calmed Astro, trying to keep her on the surface until help arrived. 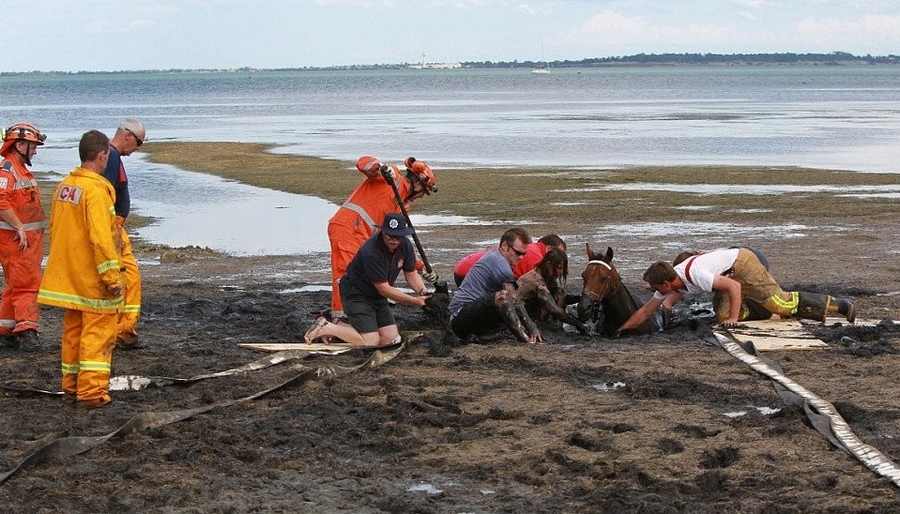 In addition to a team of veterinarians, a group of firefighters arrived. 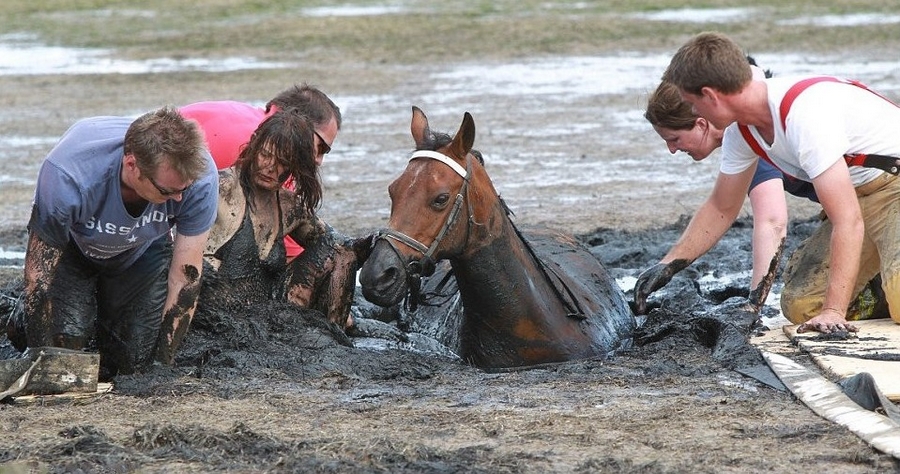 Firefighters used hoses and a winch, but long attempts were unsuccessful.

One of the local farmers gave his tractor to pull the horse out of the bog. 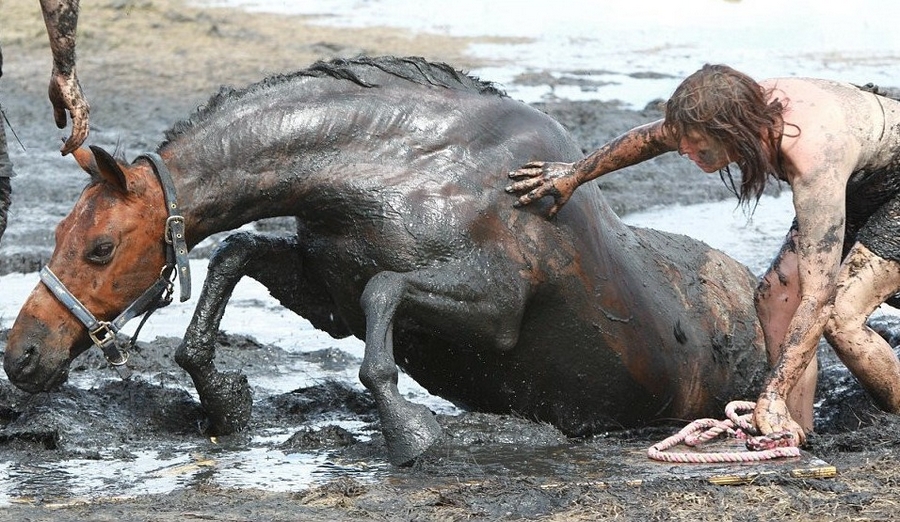 With the help of a helicopter and a tractor, in the end, after all, it was possible to pull Astro to land. 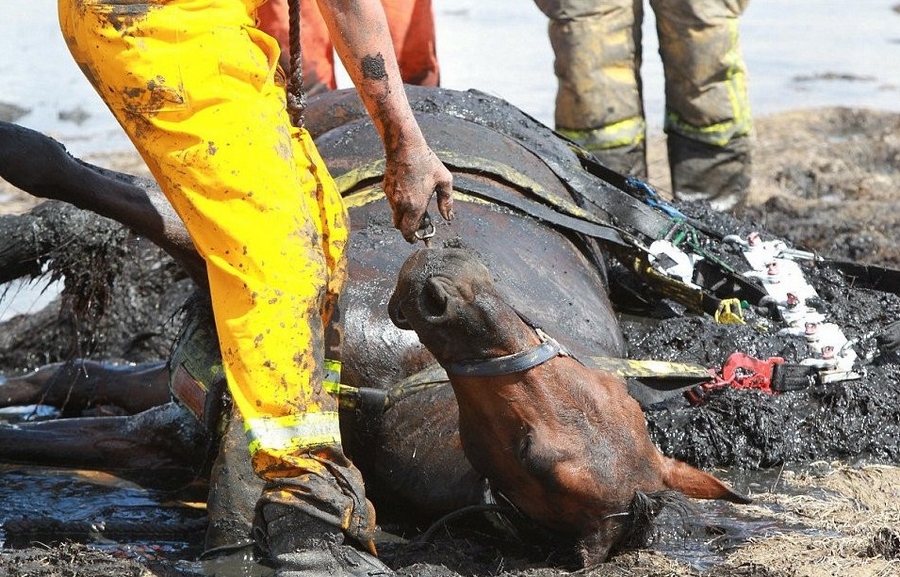 After three terrible hours, rescuers managed to pull Astro out of the quagmire. 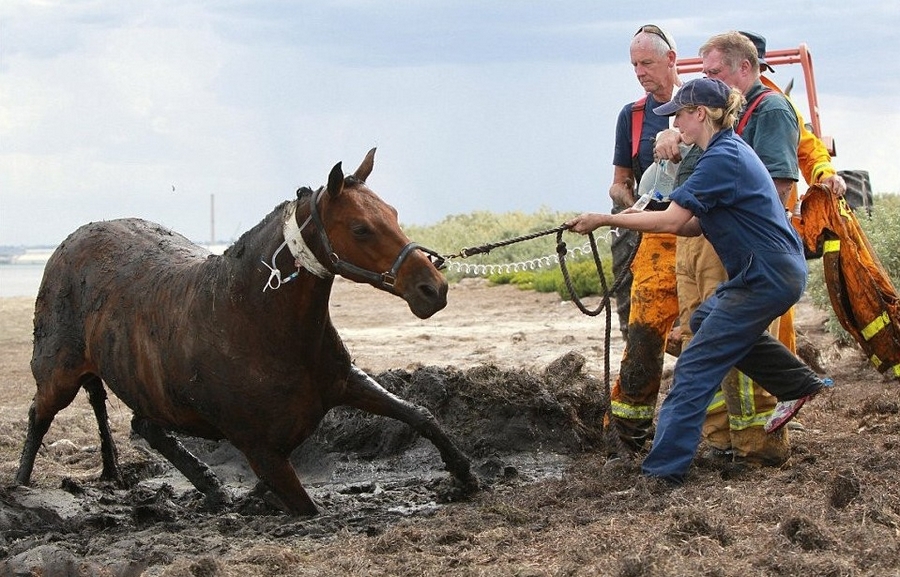 Graham said, “It was terrible. It was very painful to see my horse tired of fighting.”

Everything could have ended very sadly, if not for the courageous owner of the horse and the group of rescuers who arrived in time. 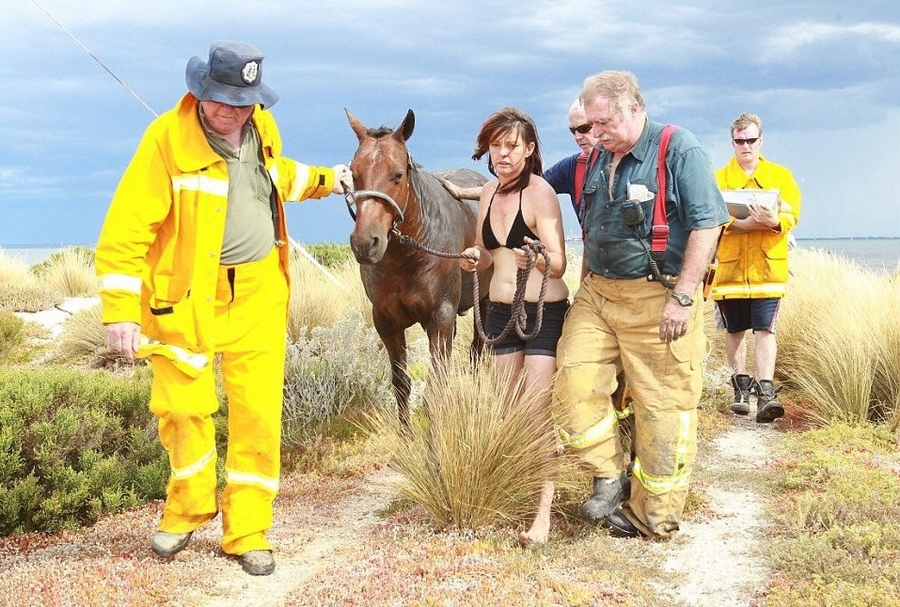 They were in time. Like in a movie, in the last minutes …