Sometimes the reluctance to have animals in the house where small children live is due to the fear of possible diseases. Many parents respond with a categorical refusal to all the pleas of the unfortunate child regarding the purchase of a puppy. The motivation of adults lies not even in the problems of caring for the animal (walking, feeding, training, etc.), but in the fear of possible diseases that are transmitted from dogs to people. Ailments that threaten adults and especially children are echinococcosis, leptospirosis, toxoplasmosis, rabies, ringworm, and others. But is everything so scary if you undergo regular examinations with a veterinarian with a tailed pet?

Contents hide
1 Healer dogs
2 Why are obesity and allergies dangerous?

According to Canadian scientists at the University of Edmonton, who have conducted studies in 746 Canadian families, dogs can protect children from diseases such as allergies and even obesity. Also, dog owners had higher immunity levels. Half of the families with children did not have a single animal (not only at the time the child was born but even during the mother’s pregnancy). The other part of the participants in the experiment owned at least 1 dog (and often several).

The scientists concluded the effect of dogs on immunity and metabolism as follows: during the development of a child who has reached 1 month of age, the intestinal microflora is formed. It is believed that it is the large and small intestines that are the main organs responsible for the level of the body’s immunity. According to Canadian scientists, if sterile conditions are created in a family where babies live at the same time, this can negatively affect the state of the immune system. Disease resistance levels will be significantly lower precisely where a significant amount of attention is paid to cleanliness. That is why biologists increasingly began to urge parents not to hide the child from all microbes that come across in his path. Games in the backyard sandbox, dirty hands while eating can, oddly enough, help a child to temper the body’s defenses. But what kind of mother can calmly watch her child, rolling on a swing, pull her palms into her mouth? Therefore, you can combine business with pleasure, allowing your kid to play with the dog. True, today it is not known for certain exactly how bacteria are transferred from an animal to a person – through wool, saliva, touching the skin.

In the same families where at least one dog lived, the bacteria Ruminococcus and Oscillospira were identified in children, passed from animals to babies. The first of them is responsible for reducing the hypersensitivity of the immune system to antigens (food, household, medicinal, helminthic, etc.). That is, in a child whose intestinal microflora contains Ruminococcus bacteria, the risk of suffering from allergies is much lower. Another type of bacteria (Oscillospira) helps prevent the accumulation of adipose tissue leading to overweight in children. In other words, dogs are not only not harmful to the well-being of the baby, but on the contrary, they are even useful. Provided that a lot of attention is paid to the health of the dog. Moreover, the child’s communication should occur with a domestic dog, but it is better to protect the baby from friendship with a yard or stray animals.

By the way, the protection of a child from obesity is due not only to the transfer of “canine” bacteria to humans. Any puppy, and sometimes quite an adult pet loves to play. Children are happy to race with animals, go for walks, play ball. The movement also prevents the deposition of fatty masses.

In addition to protecting against allergies and obesity, the bacteria Ruminococcus and Oscillospira can prevent the development of pneumonia and cholera, terrible diseases that can take a baby’s life or affect his quality of life.

Why are obesity and allergies dangerous?

So, we now know the opinion of Canadian biologists. Is it worth, relying on him, to decide in favor of buying a dog? Consider the picture that threatens a child with increased body weight: 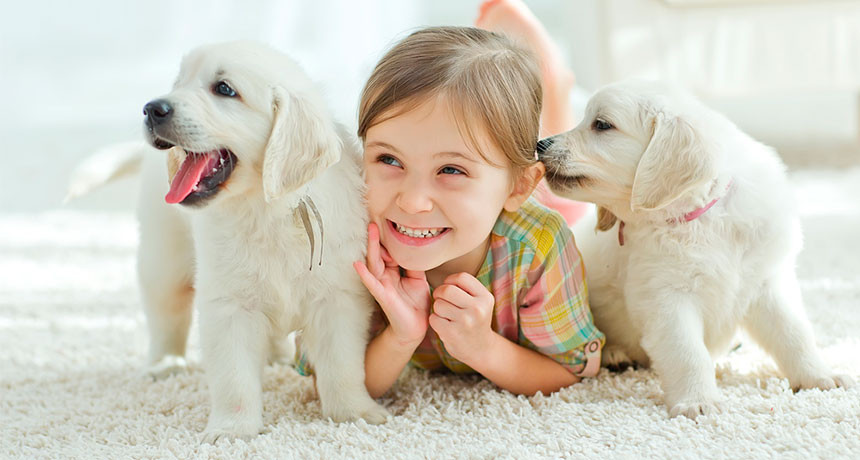 Another ailment that dogs help prevent is allergies. According to the WHO, a third of all inhabitants of the Earth suffer from it. And the danger of this condition lies not at all in redness of the eyes, coughing, or lacrimation. Allergies can lead to such dire consequences as:

The complications of allergies and obesity listed above are truly impressive. Whether it is worth getting a dog is up to adults to decide. However, it should be borne in mind that communication between an infant and a four-legged friend is not as scary as it seemed earlier.