The Rhodesian Ridgeback became an officially recognized breed only in the early 1920s, although information about its ancestors goes back centuries.
The Rhodesian Ridgeback is a breed that made a splash among all dog breeding enthusiasts as soon as it emerged from the fabulously mysterious expanses of South Africa. 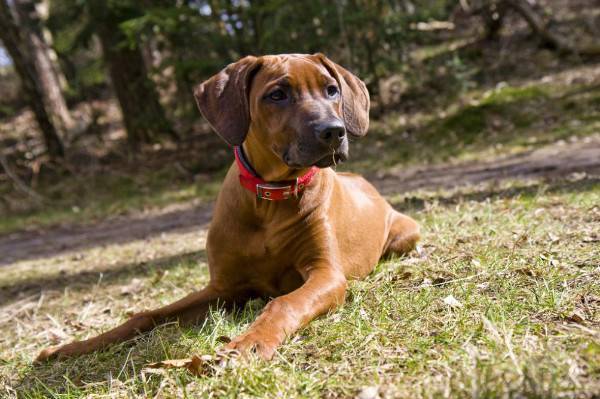 Like many other modern purebred dogs, the Rhodesian Ridgeback is a mixed breed.
The roots of the breed can be traced back to a hunting dog that was able to hunt large predatory animals, including lions. These dogs were prized for their consistently loyal temperament, making them perfect companions for tribes that constantly moved from place to place, meeting danger at every turn. Such people were the Hottentot tribes, whose roots come from the southern borders of the Kingdom of Egypt, possibly from Ethiopia or South Sudan.

The first indisputable evidence of Hottentot dogs is rock carvings 30 km north of Rusape in Zimbabwe. The Hottentot dogs were most likely significantly smaller than modern Ridgebacks – a little more than 46 cm at the withers. The dog was described by historian George McCoulhill as a terrible creature with a body resembling that of a jackal, and hair on the back, growing in the opposite direction, but at the same time, an animal selflessly devoted to the man. In the future, the external data of the dog was improved by crossing with dogs of the Bakalahari tribe, which have the Greyhound type, which undoubtedly improved the hunting qualities of the Hottentot dogs.

In 1651, the Dutch East India Company sent Jan Van Riebeck to build a settlement at the Cape of Good Hope in South Africa, where he arrived on April 6, 1652. The Dutch policy at that time with regard to breeding domestic animals was that they tried to breed new breeds by crossing those brought from Europe with local breeds, and not try to introduce purely European breed lines in new countries. In South Africa, this led to the development of the red-brown Afrikander animals, which were the forerunners of today’s Ridgebacks. The settlers spent their free time hunting and tried to improve the quality of the Hottentot dogs, by crossing with some European sporting breeds, which was witnessed and participated by Jan Van Riebeck.

The next, perhaps the most crucial step in breeding, came in the 1870s when missionary Charles Helm brought two ridge dogs, Powder, and Lorna, from Swellendam to Matabeleland, Rhodesia, where he met Cornelius Van Ruen, who was studying cattle breeding in Plantry (Matabela) and also has a huge pack of hunting dogs. When Van Ruen saw two bitches brought by Helm, he admired their physical and protective qualities, which led to an agreement with Helm to cross Helm’s bitches with Van Ruen’s hunting dogs. The result of crossbreeding was dogs with ridges on their backs, red coats, and a modern Ridgeback tail, which laid the foundation for the purposeful breeding of dogs by Van Ruen in the next 35 years in order to develop a dog that can hunt lions in the way its ancient ancestors did.

The breed was officially recognized a few years later and was the merit of Francis Barnes, who, together with other enthusiasts, founded the Salisbury nursery in 1898-1900. In 1915, he bought his first Rhodesian Ridgeback, the Dingo, which had its roots in the Van Ruen Ridgebacks. A little later, Barnes acquired another Ridgeback – the bitch Judy, launching the famous line of Exdale Ridgebacks. Barnes was clearly aware of the need to introduce breed standards, as he was constantly faced with Ridgebacks of different sizes, coats, and colors. In 1922, a group of 7 people founded the Rhodesian Ridgeback (Lion Dog) Club. In the same year, the first breed standard was released, which, according to Barnes, was largely borrowed from the Dalmatian standards. In fact, this standard has served well and has remained virtually unchanged on the most important points, having undergone only minor changes that limit the acceptable coat color and allow white spots only on the fingers and chest. In September 1924, the Rhodesian Ridgeback was officially recognized as a breed by the South African Kennel Union.

The Rhodesian Ridgeback has come a long way as a breed before the first official recognition in the country of origin. Rhodesian Ridgebacks were exported to all parts of the world, and their number increased in all countries where they took root and gained more and more popularity. As their popularity grew, so did the legends about their hunting prowess and guarding abilities. The looting of leopards and hyenas was driven out and kept away by the barking of these brave hunters. Victory scars testified to their exploits.

So, one of the reasons why today’s Ridgebacks deserve attention and admiration is their remarkable hunting ability.
African hunting, especially lion hunting, was held in high esteem at the end of the 19th century. Now, this ruthless destruction of wonderful creatures of the wild seems wild, but then the most successful hunters became known to the whole world. Perhaps the most famous of these was Frederick Courtney Selous, who was considered his friend by the President of the United States, the German Kaiser, and many industrial magnates. Some famous writers, such as Henry Ryder Haggard, have used it as a prototype in their books. It remains unknown whether Selous deliberately used hunting dogs with ridges on their backs? However, one of his most famous successors, Cornelius van Royen, did just that, and therefore for a time the comb dogs were even called “van Royen’s dogs”. Great hunting fun made South Africans pay special attention to the hunting abilities of comb dogs. The lion hunt has earned them a reputation for the nickname “lion dog”.

In 1922, several dog breeders, inspired by the stories of Van Rooyen’s hunting exploits, came together to discuss the creation of a new breed of native dog with comb-like formations on the back. This happened a year before Rhodesia became an independent colony of the British Crown called Southern Rhodesia. It was decided that the “real son of Africa” should be reddish-wheaten, agile, proud, strong, with an upright posture – that is, exactly as he is today. This decision was made at the Bulawayo farm located in what is now Zimbabwe.
Ridgeback is the true son of Africa.