The noble hound dog Rhodesian Ridgeback has South African roots. This is a rather rare and unique breed, which is distinguished by its amazing color. The amber eyes fully match the color of the animal’s coat. One of the features is the stripe on the back, which gave the name to the breed, “ridge”, which grows in the opposite direction of the entire coat. 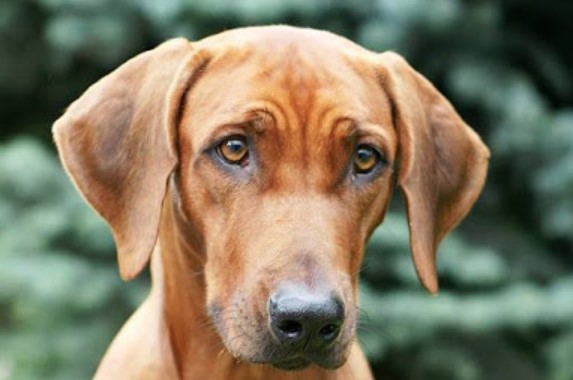 The Ridgeback dog is very determined and quite strong. Activity, intelligence, and independence are the main character traits of the Rhodesian Ridgeback. But not everyone is able to cope with a representative of this breed and it is not suitable for everyone.

Admittedly, this is not the best choice for inexperienced dog owners. Ridgebacks are full of a desire to dominate and it will not be easy for owners with an overly gentle disposition to “negotiate” with them. In this case, you need a powerful person who can devote a lot of time to teaching and raising his pet.

If you do not educate your pet, like any dog, the Ridgeback can become aggressive. But at the same time, without ceasing to love his master. Dogs are well trained and trained and can be excellent guards.

It is necessary to provide constant physical activity, it is not in vain that these handsome men have such developed muscles.

Rhodesian Ridgebacks are loyal, intelligent, and somewhat detached from strangers, they behave with dignity and restraint towards strangers. However, if the dog senses that something is wrong, he is able to make decisions and will not spare the enemy. This should not be confused with aggression; a ridgeback of the right temperament will tend to ignore the stranger rather than challenge him. Again – the breed requires patient, consistent training with the right balance of encouragement and restraint, and good socialization.

Despite their athletic, sometimes imposing appearance, Ridgebacks are very sensitive. They obey and execute commands, but do not like it when the owner wants to offend and harm for no reason. With his family, he is a quiet, gentle companion, one who is able to protect his home and people, if the need arises.

Before mating dogs, you first need to walk them well and not feed them. Ridgeback mating involves muzzles for the pair to avoid injury to the owners while holding the bitch. Puppies are always kind and playful, but you need to start raising them from an early age.