The hands of breeders are never idle. Inquisitive minds day after day trying to come up with new forms of already known aquatic creatures. And if at first, they tried to get only new species of fish, now the selection of crustaceans is also not uncommon. Popular with hobbyists, the Riley Shrimp is a good example of the hard work that has resulted in interesting cherry shrimp color forms while maintaining overall simplicity. In our article, we will acquaint you with the features of keeping these funny crustaceans.

Rili Shrimp (Neocaridina heteropoda var. Rili) is a selection from the well-known cherry shrimp. It differs from the progenitors by the alternation of brightly colored and transparent body parts. 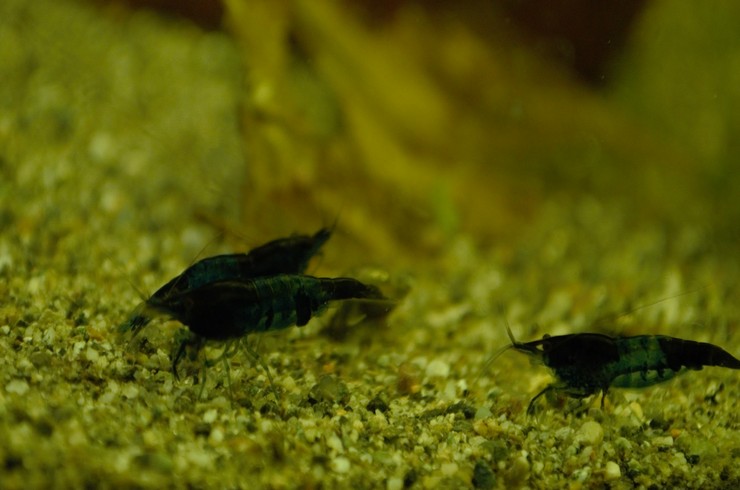 The Riley shrimp was obtained in 1996 by the famous Japanese breeder Hisuasu Suzuki and became widespread after 15 years. In the process of creating the form, the breeder carried out painstaking work to select cherries with suitable body colors in order to fix the desired gene. It is very pleasant that the new shrimps, having received an interesting color, retained the endurance and unpretentiousness of their original form, so they can be recommended for keeping even for novice aquarists.

Riley shrimp are characterized by a strict classification according to the ratio of colored and transparent body parts. The most valuable are rocks with a large number of transparent areas. There are several directions for breeding Riley shrimp: the creation of individuals with a colored cephalothorax and a depigmented abdomen, as well as the removal and fixation of symmetrical spots on the sides.

In terms of external structure, Riley shrimp are no different from cherries. The main difference between these species is only in body color. In Riley, only the cephalothorax and tail are colored, while the central part does not contain pigments. Most often there are forms with red, yellow, and orange colors, less often – blue and black.

The color is influenced not only by genetics but also by the conditions of detention: Riley shrimp will look best in aquariums with dark soil. The aquarium should be specific or with small, peaceful fish species. 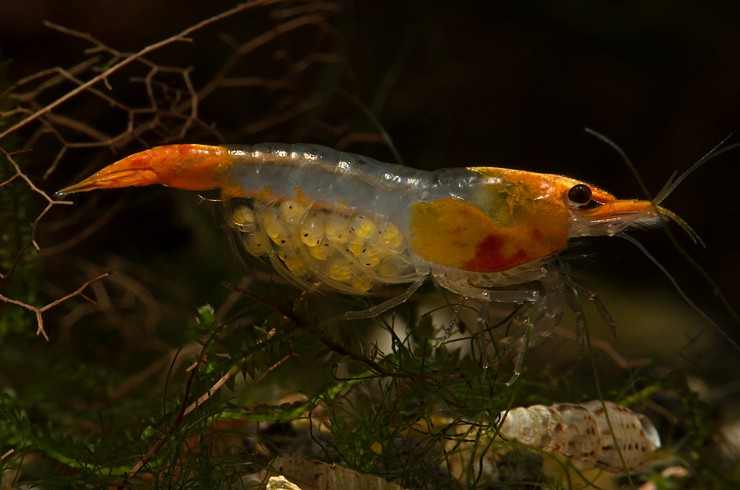 Riley shrimp does not occur naturally. It was obtained by long-term selection of cherry shrimp. Due to its unpretentiousness, it has occupied a wide niche in the aquarium hobby.

Riley is one of the easiest aquarium shrimp to keep. It is recommended to keep them in groups of 10-20 individuals. It is advisable that one shrimp has at least 1 liter of water. It is better to take an aquarium with a reserve of volume because Riley shrimps reproduce very actively.

Any dark substrate is suitable for soil. Often Indian almond leaves are used instead of soil. As a decoration, it is best to install natural driftwood, plant mosses, or slow-growing plants. It is helpful to create or set up shelters in which to hide the shed shrimp until their shell hardens.

A small filter should be installed in the aquarium to purify water, which also needs to be additionally aerated. The current should not be very strong. Shrimp do not tolerate high concentrations of nitrogenous compounds. Lighting does not play a special role.

Once a week, you need to change the water, up to 20% of the volume of the aquarium.

Peace-loving Riley shrimps get along well with small ornamental fish, which do not show gastronomic interest in crustaceans. The choice of species here is quite wide: guppies and tetras, neons and peaceful barbs, and many, many others. Predators, such as Astronotuses or Acars, should be excluded from the list of roommates right away.

There will be no problem keeping with other peaceful shrimps like crystals or cherries. Although with the latter Riley they can interbreed, which does not benefit the preservation of the purity of the breed. 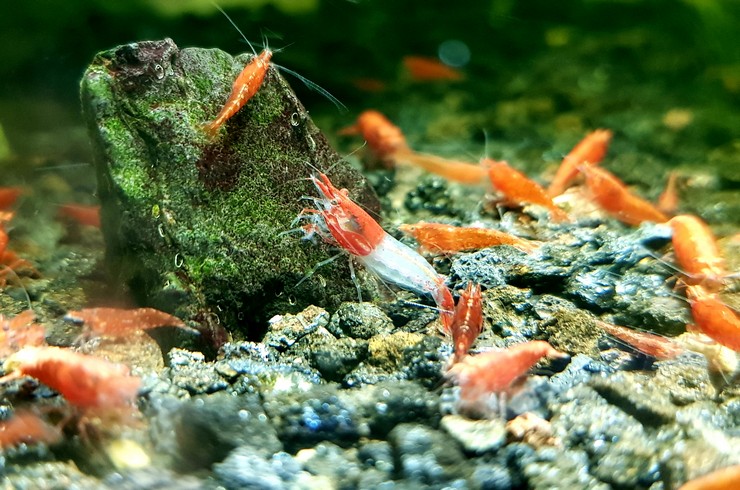 It is advisable to regularly feed the shrimp with specialized feed for crustaceans from the Tetra Crusta series, which will provide them with a complete and varied diet. Sinking food particles quickly sink to the bottom, where your pets can eat them, while it retains its shape for a long time and does not pollute the water.

It is recommended to feed Riley shrimp once a day and have a weekly fasting day.

The breeding process for Riley shrimp presents no difficulties, there is no need to create special conditions or to remove the producers. Everything goes naturally without human intervention.

A female ready for breeding is very easy to distinguish by the appearance of a light spot on the back – the so-called “saddle”. This is the area in which the ovaries are located in shrimp. If you notice a “saddle” in a female, then the appearance of eggs is not far off. A female ready for mating releases special chemicals into the water – pheromones; under their influence, males begin to rush around the aquarium like mad. 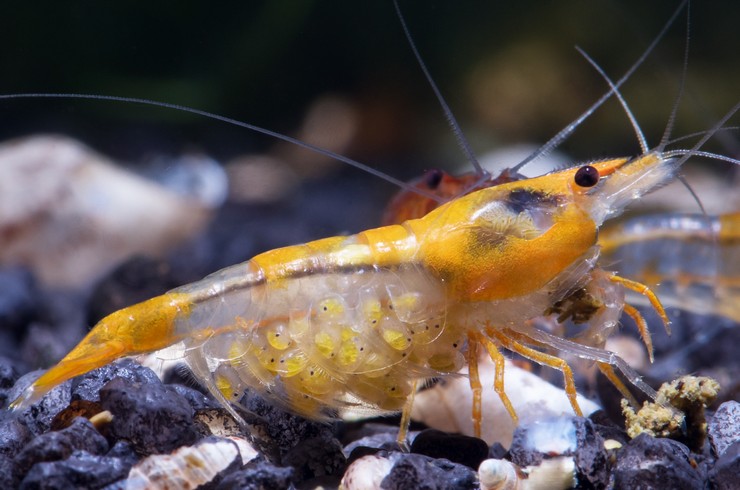 This is followed by the fertilization of eggs, the further development of which occurs under the abdomen of the female. The constant movement of the pleopod helps ventilate the water around the eggs. The incubation period lasts about a month. As soon as the eggs have eyes, this is a sure sign that soon the eggs will be dropped by the female, and miniature copies of the parents, 1-2 mm in size, will be born. Even at this age, they are already completely independent and live quietly next to other relatives. Cannibalism among Riley shrimps is not common, so they have nothing to fear.