The Siamese cockerel, or Betta splendens, is one of the most popular aquarium fish in the world. It can be found everywhere in the aquariums of both amateurs and professionals. And if the former value first of all the beautiful color, unpretentiousness in content, interesting behavior, and ease of breeding of cockerels, the latter contain a large number of breeding forms, many of which become laureates of specialized exhibitions.

The cockerel fish belong to the suborder Labyrinth fish. Their feature is the presence of a special respiratory organ called a labyrinth. This organ is represented by plates, densely penetrated by blood vessels, and is located in the accessory supraciliary plane. Thanks to him, bettas can use atmospheric air for breathing. This type of breathing is vital for aquarium cockerels, therefore keeping in a closed vessel, even well saturated with oxygen, leads to the death of fish. The maze appeared in cockerels as an adaptation to living in reservoirs that are poor in oxygen.

Cock fishes are extremely quarrelsome with each other, and very often a collision of two males leads to the death of one of them. This feature has been used since ancient times by the inhabitants of Thailand for tournament battles for money. In some provinces, this tradition is still alive.

Interesting preparation methods are used to prepare cockerels for tournaments. To increase endurance, the cock is placed in a tall bottle and forced to swim up and down for a long time. A mirror is moved along the glass, in which the betta can see her reflection. Creating a whirlpool in a round vessel also allows the cock to develop its strength. The fighting technique is refined when the cock is placed next to younger, weaker males.

Despite the fierceness of the clashes, “cockfighting” is not devoid of nobility. A male cockerel will never attack an opponent while he rises to the surface to swallow the next portion of air. Also, if three males crossed in one place, the third does not interfere in the fight between the other two but prefers to fight with the winner. 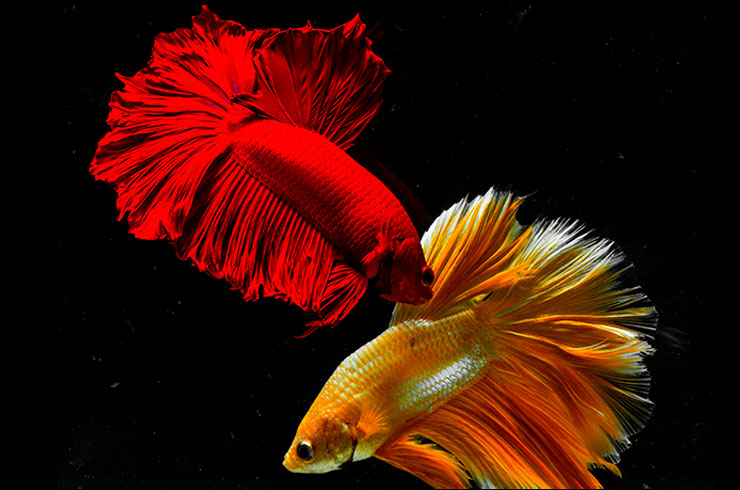 The body shape of cockerels is oval, it is elongated in length and slightly flattened from the sides. Betta is a medium-sized fish. The average length is 5-6 cm, while the females are smaller. 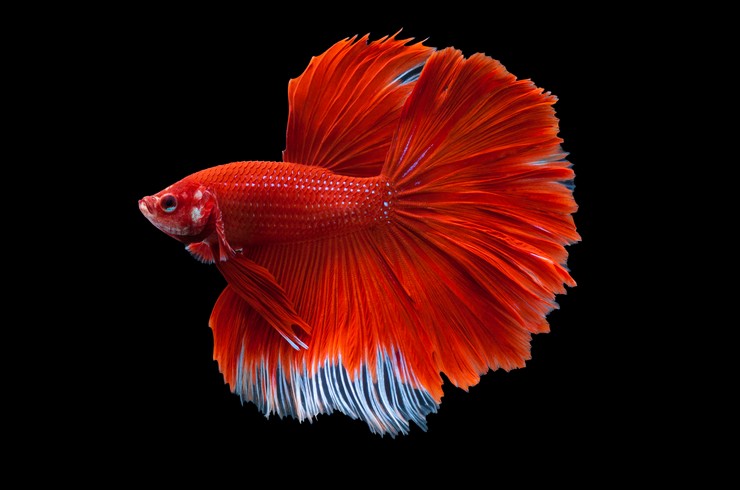 The pectoral fins are pointed, while the dorsal and caudal fins are rounded. In male cockerel fish, fins are more developed than in females. Upper mouth. The natural coloration is usually dark brown with rows of shiny green specks, but in the aquarium, the richness of the coloration of these fish is unmatched. The color of the scales of cockerels can change depending on the surrounding conditions: during spawning or clashes with other males, the color intensity increases, and during rest, it weakens.

Modern breeders have bred more than 70 breeds of cockerel fish, differing in color and shape of fins. In aquariums, you can find various variations of black, emerald, blue, red, pink, and white tones. You can often observe how the scales of cockerels play and shimmer when moving and in bright light. 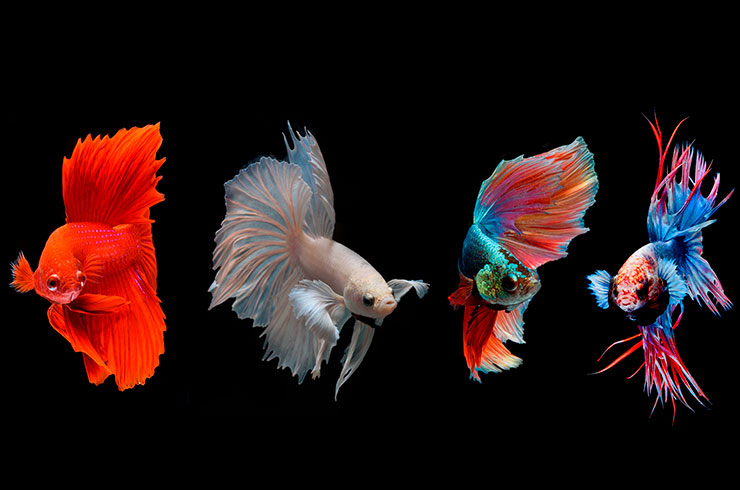 Depending on the shape and size of the fins, about ten varieties of aquarium cockerels are distinguished. For example, crown-tailed, delta-tailed, double-tailed, and many others.

At the beginning of the 19th century, the inhabitants of Siam (modern Thailand) began to pay attention to ordinary-looking fish, which were distinguished by extremely aggressive behavior towards their relatives. They began to be regularly used to organize fights for money, which prompted especially enterprising residents to breed wild Betta individuals. The fish obtained in this way were called Pla Kat, which means “biting fish”. Some of the most successful specimens were presented to the King of Siam and lived in his palace.

In 1840 the King of Siam presented several valuable specimens of cockerels to the Danish physician and naturalist Theodore Cantor. In his scientific works, Dr. Cantor referred the new species to the genus Macropodus. However, already in 1909, the world-famous ichthyologist Charles Tate gave the species a new name – Betta splendens. Most likely, the name of the genus is a reference to the militant tribe Bettah that existed at that time, and the specific name is a modified “splendid” (beautiful, beautiful).

The first inhabitants of Europe who saw the cockerels were the French and the Germans. A little later, in 1910, the fish came to the United States. It was brought here by Frank Locke, who became one of the first breeders who received a new color variation of the aquarium cockerel (although he mistakenly named it a new species – Betta Cambodia).

The appearance of the betta fish in Russia is associated with the names of domestic aquarists V.M. Desnitsky and V.S. Melnikov. The first of them brought an extensive collection of exotic fish from Singapore, and the second, at the beginning of the 20th century, was the first in the country to breed a number of labyrinth fish. A prestigious competition for the best fighting fish was named in his honor.

The homeland of the cockerel is Southeast Asia. It is here that nondescript natural forms live, which can be found in slow-flowing or stagnant bodies of water in Thailand, Cambodia, Laos, Vietnam, Indonesia, and the Malay Peninsula. Betta is found everywhere in the muddy and oxygen-poor waters of rice fields, and often even in the sewers of large cities. An additional respiratory organ – a labyrinth – helps the maze to survive in such extreme conditions.

The breeding forms of cockerels have become real cosmopolitans. They can be found in hobbyist aquariums around the globe. Local and international exhibitions and competitions are held on a regular basis, where you can meet the most unusual and outstanding representatives of the aquarium cockerel. 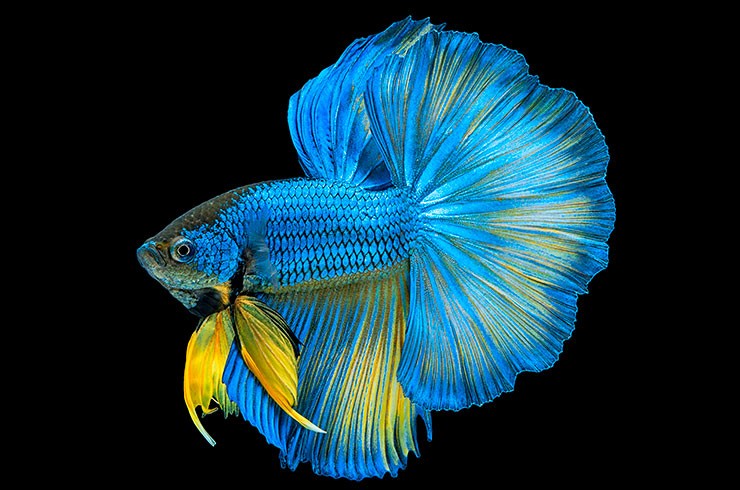 Due to the fact that breeders around the world have bred a huge number of forms of cockerels, significantly different from each other, there is a certain confusion among aquarists associated with the use of the word “species”. All modern aquarium bettas, no matter what body color and fine structure they differ in, are varieties of the same species – Betta splendens, therefore it is correct to call them breeds, not species. 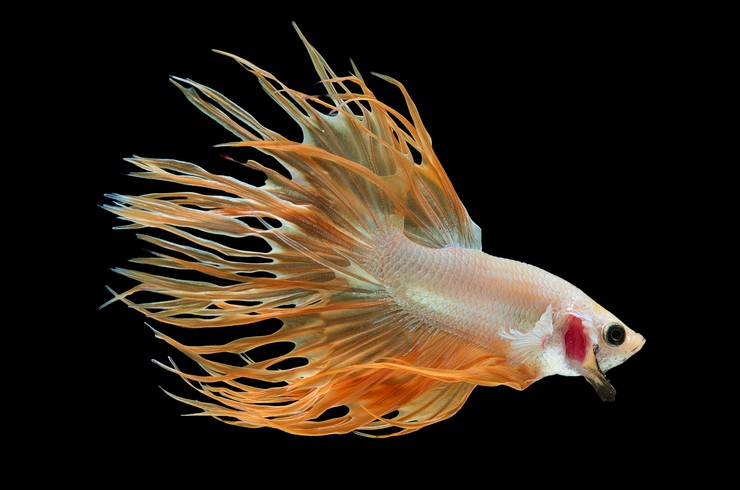 It is worth noting that in the genus Betta, there are several species of cockerels, for example, Betta smaragdina or Black cockerel (Betta embellish), which, unlike their closest relative, are relatively peaceful fish. Representatives of these species can be kept in groups and they can often interbreed with Fighting fish. Some members of the genus Betta do not build a nest from bubbles but prefer to carry offspring in the mouth.

Modern breeds of aquarium cockerels are classified according to two characteristics: the color of the scales and the shape of the fins. Giant or royal fighting fish (distinguished by their large size) and cockerels with the “Dragon” color (large body and a large number of silver-metallic shades on the scales, like chain mail) are distinguished into a special group. 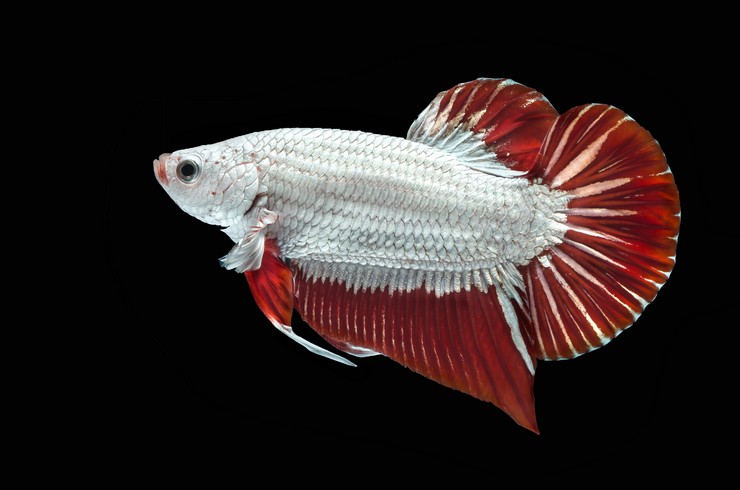 Many hobbyists started their first steps in aquarium keeping with the purchase of a cockerel fish. This is due to the tremendous endurance of betta, the ability to keep an aquarium in small volumes (from 3 liters), and the absence of the need for aeration. However, keeping a betta in the aquarium should take into account some of the characteristics of this fish.

First of all, you need to decide on the volume and configuration of the cockerel aquarium. The most suitable option would be a classic rectangular aquarium with a volume of 20 liters or more. It will have sufficient volume for the comfortable living of a fighting fish, and will also allow you to install and decorate all the necessary equipment. Keeping cockerels in round aquariums is very popular. Disadvantages of such containers: small volume, difficulties with equipment installation and maintenance, distortion through the convex glass. If the desire to have a round aquarium with a cock is very strong, it is recommended to buy branded round aquariums with built-in equipment (they have the necessary set of equipment for the life of the fish, as well as an attractive design). In small aquariums, only one male cockerel can be kept and, if desired, several females. If you plan to keep several males, then you need to place them in an aquarium of at least 100 liters with a lot of vegetation and shelters or use a special plastic partition, pierced with holes for water circulation. You should not keep the cockerels in pairs, in this case, an active male can kill a female that is not ready for spawning. The aquarium should be covered with a lid or mesh to prevent the cock from jumping out of it. In this case, female cockerels can be kept in groups in the same aquarium.

It is best to use dark soil, it is advisable to place it in a layer of 2-3 cm, with such gravel, cockerel fish look most impressive and contrasting.

Aquarium cockerels are heat-loving fish, a comfortable temperature for them is 24-26 ° С. It is noted that the higher the water temperature, the brighter the color of the cockerels. The optimal parameters of hardness and acidity are 2-12 ° and 6.0-7.5, respectively. As already mentioned, aeration is not necessary for the cockerels in the tank, but it is important that there is a gas exchange with the water surface. It is highly recommended to install a filter in the aquarium to keep the water clear (mechanical cleaning) and safe (reduce the likelihood of accumulation of toxic ammonia and its derivatives). A weekly change of 25-30% of the water is necessary, in very small aquariums it is recommended to change more often – 2-3 times a week. 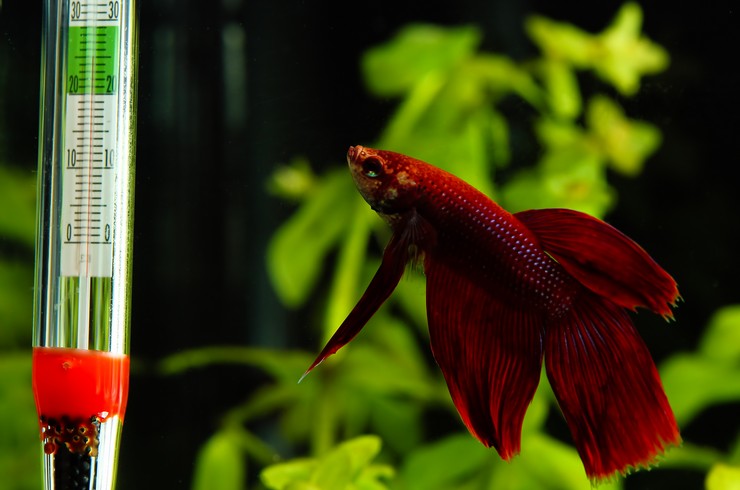 In addition, the plants will serve as a natural refuge for the inhabitants of the aquarium. When installing artificial plants or decorations, you should pay attention to the absence of sharp edges, which can damage the delicate fins of the fish.

Sometimes bettas allow their owners to pet them. Do not overuse this procedure, as you can accidentally damage the protective layer of mucus on the scales, which will make the fish more vulnerable to disease.

Quite often, fighting fish lie at the bottom of the aquarium or on its side near the surface itself. This usually scares the owners of the cockerels, but for these fish, this behavior is typical and not dangerous. It is worth sounding the alarm only if such a phenomenon has been observed for a long time.