Sacred Burma is a cat breed that combines the appearance of the most famous breeds in the world – Persian and Siamese.

One of the most mysterious modern cat breeds is the sacred Burma or Burmese cat.

The ancestors of these beautiful animals lived in Burmese temples. They embodied tranquility, served the monks as devoted assistants, and also guarded the cult shrines.

There is a legend according to which these cats managed to save the temple from the fire several times and even prevent the robbery and attack of the invaders. That is why the name “sacred Burma” is so symbolic.

The Burmese got their characteristic color thanks to their special genetics. Scientists hypothesize that crossing Persian and Siamese breeds allowed these cats to acquire soft coats and distinctive white “gloves” on their paws.

Burma’s are incredibly calm and unpretentious pets. Therefore, people of any temperament can settle them in their house: they will calm choleric people, and they will cheer up phlegmatic people a little. 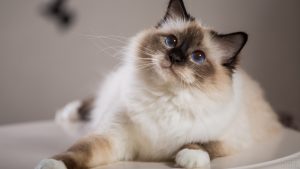 Sacred Burma appeared as a result of crossing representatives of the Persian and Siamese breeds. Thanks to this, the animal acquired such characteristic features of its appearance as a fluffy coat (from the Persians) and a clearly expressed terminal fragmentary color of the muzzle and legs (from the Siamese).

An interesting version of the appearance of the Burmese is widespread among lovers of this breed. If you rely on her, then in Europe the first time these cats were seen in 1919. It was then that the American billionaire Vanderbilt returned from a cruise to the eastern states. From there he brought a couple of fabulously expensive kittens, for which he paid an amount identical to the budget of a medium-sized enterprise.

The male did not endure the trip, but the female survived, grew up in France, and for the first time rolled in Nice.

There is another suggestion that the pet of the cat breed we are considering – sacred Burma – was the result of a number of experiments by French breeders and breeders. Whatever version is true, but in 1925 this breed was officially registered in France in the cat glossary.

These were incredibly rare animals. After World War II, only two individuals lived in all of Europe. Since 1945, scientists have begun to revive the endangered breed by crossing the surviving representatives with the Siamese and Persians. The cat became very popular, and already in 1965 it was recognized in the USA, and a little later in the UK.

Burma is characterized by a muscular and refined medium-sized body. The weight of the animal can range from 4.5-8 kilograms. 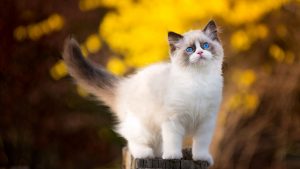 The color is often monochromatic. Dark brown and blue tones are recognized as classics. In the 1960s, they began to breed individuals of chocolate, red, lilac, and cream colors, but the priority is still the classic color. Kittens appear exclusively white. The color characteristic of the breed begins to show only when the babies reach the age of one month. And by the second year of life, he is finally formed.

An interesting fact – the kittens of this breed of the Burmese cat is born without any “spots” and color. The final color of sacred burns can take about two to three years.

On the paws of the Burmese, they “wear” the glorified snow-white “gloves”, which are considered the breed’s business card. They appear on the limbs of three-month-old kittens. But during this period it is rather difficult to consider them. When the kitten is six months old, you can see how long and white these “gloves” are. The Burmese are covered in silky, incredibly light hair. Around the neck, it is slightly longer and forms such a collar. The pet’s tail is long and fluffy. A thoroughbred Burmese kitten needs high-quality veterinary care. By nature, animals have strong immunity and stable health, however, like other pets, they can suffer from urolithiasis, obesity, food allergies, and kidney failure.

Some experts also identify a number of diseases to which the Burmese are located at the genetic level:

If there is a suspicion of any congenital or acquired diseases, the owner of the animal should contact the veterinary clinic for treatment.

With proper care and veterinary support, Burmese can live for 12-15 years.

Caring for cats of this breed will not present any particular difficulty. The wool of cats is silky, with a minimum amount of undercoat, so it is easy to comb and rarely forms tangles.
Regular brushing, rinsing your eyes to prevent tear tartar, cleaning your ears, trimming your nails, brushing your teeth to prevent tartar, and massaging your gums is easy.

The kind and calm Burmese are an excellent choice for families. These cats are moderately affectionate and playful, they will melt the hearts of all their new family. The cat needs minimal care, and its maintenance will not give the owners a lot of trouble, because the animals are very neat, intelligent, and moderately temperamental.