The Samoyeds have remained largely unchanged since helping the northern peoples to do hard work, so the health of the Samoyeds is still quite strong. However, there are diseases to which the breed is more susceptible than others.

It is advisable to clarify whether the puppy’s parents have test results for hereditary diseases characteristic of the Samoyeds. 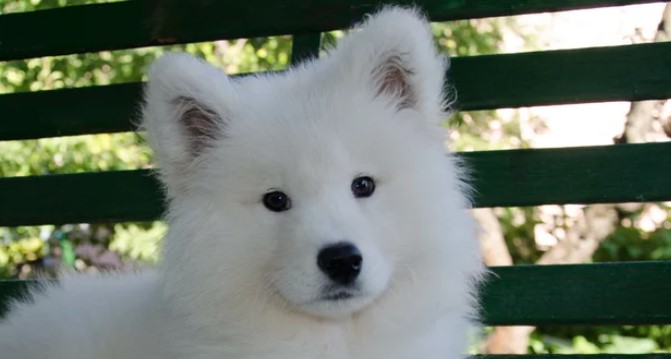 Canine degenerative myelopathy is a severe, progressive neurodegenerative disease that causes paralysis of the hind limbs. It is associated with a dysfunction of the spinal cord motor neurons due to the simplification (degeneration) of their nerve endings. The disease begins with an almost imperceptible weakness in one or both hind legs. It then becomes difficult to get up from a lying or sitting position. The dog periodically loses balance, coordination is disturbed, after which paralysis develops. Most often, the duration of the disease does not exceed 3 years.

Progressive retinal atrophy is the general name for a group of diseases of the retina that cause damage to photoreceptor cells (cones and rods) up to their death. Twilight vision suffers first, then the dog loses daytime vision. As a rule, the first symptoms appear at the age of 3 to 5 years. Typical feature: permanently dilated pupils for maximum light capture, as well as so-called “tunnel vision”.

Hyperuricosuria is an inherited disorder associated with the accumulation of uric acid salts and the formation of stones.

If you notice lethargy, lameness, poor appetite, fever, indigestion, or other frightening symptoms in Samoyed, it’s best not to risk it and see your veterinarian.