The history of the Samoyed breed goes back centuries. Samoyed dogs (or Samoyeds, which are also affectionately called “Sammi” and “seals”) have served us faithfully for many centuries. A variety of functions have fallen to their lot, they are universal. Samoyeds worked as sled dogs (they could carry a load 1.5 times heavier than their own weight), herded reindeer, guarded dwellings, participated in hunting, and nursed children. At night they served as heating pads. Samoyeds are still ready to warm their owners. If you sit next to a lying dog and hug him, he will freeze and lie still for as long as you need. The inhabitants of the North deservedly respected and honored these dogs. 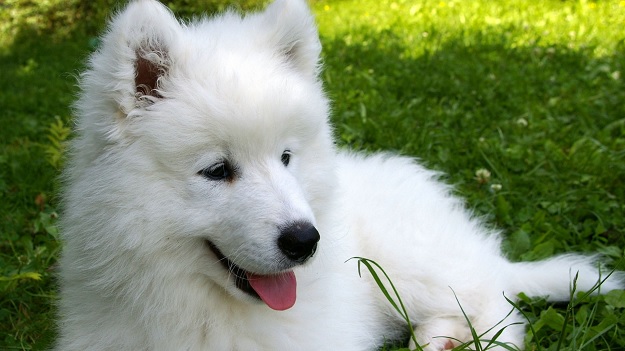 The Samoyed breed owes its name to the tribes inhabiting the northern lands. Earlier Samoyeds were called Nenets, and later – Nganasans, Enets, and Laplanders.
Perhaps this word came from the old Russian “self-united” (“achieved inner unity”) since the representatives of the tribe stewed in their own juice and did not communicate with the “strangers”. There are other versions of the origin of the name “Samoyed”. For example, “he goes by himself” – that is, he moves on skis. Or maybe the white dogs blended with the snow so that it seemed as if the sled was going by itself? Perhaps the name comes from the phrase “land of the Sami” – saam-jedna. Since the truth is extremely difficult to establish, everyone can choose the option to their liking.

For centuries they did not leave the northern lands, roaming with their masters along the sea coast, until the British captain Joseph Wiggins brought them to England. However, there is no documentary evidence for this.
In 1889, the Englishman Ernst Kilburn-Scott became interested in the Samoyeds. He brought several representatives of the breed from Russia and organized a kennel. As it turned out later, only thanks to this the breed was saved from extinction. At that time it was possible to meet Samoyeds of different colors. But over time, only white individuals remained.
Due to their beauty, endurance, and wonderful character, the Samoyeds gained popularity in Europe, they lived in the houses of very wealthy people. Even King Edward VII kept the Samoyeds at court.
However, the Samoyeds did not become arrogant. They were still willing to help people. None of the famous travelers to the South and North Poles could do without these dogs. Such travelers included Fridtjof Nansen and Roald Amundsen.

Ernest and Clara Kilburn-Scott are honored to create the breed standard. It has remained almost unchanged since 1909. Only the items concerning height, pigmentation, and color were edited.
In 1920 the English Samoyed Association was organized. In 1932 the French recognized the breed and in 1950 they organized their own club.
In Europe, the breed became more and more popular, while in its historical homeland it practically disappeared. And only in 1989 dogs appeared in the USSR. They came from Denmark.
Now Samoyeds can be found all over the world.