The Scottish Terrier or Scotch Terrier is one of the most famous and recognizable breeds. A short, stocky dog ​​with long eyebrows and a beard is not very popular today. Not everyone will like its complex nature, and it is not easy to care for long hair. However, lovers of these independent, brave, and moderately playful companions with a hunting past will always be found! 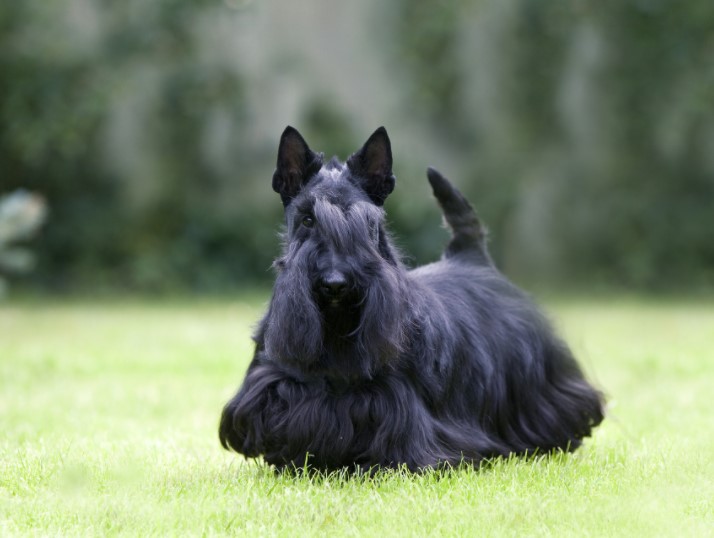 From about the 16th century, Scottish Terriers began to be distinguished by their place of origin: dogs from the Isle of Skye were called “Skye Terriers”, and the rest – “Highland Terriers”. The Highlands were actively used for hunting burrowing animals, for rodent control, and for sentry work. There is still debate about which species is the ancestor of the modern Scotch Terrier. Most dog handlers tend to believe that these were Highlands.

If we turn to reliable facts, then we can safely say that it took many years for breeders to breed the Scottish Terrier in the form in which it is today. For the first time in a separate ring, they performed in Birmingham in 1860. In subsequent shows, Scottish Terriers were shown alongside Skye Terriers, Dandy Diamond Terriers, and Yorkshire Terriers.

This caused indignation among fans of the breed, and then Captain Gordon Murray, known under the pseudonym Stretbogy, compiled the first description of the Scottish Terrier, and a few years later the breed standard was written and adopted, to which only minor changes were later made. Already in 1882, Scottish Terrier clubs were created in Scotland and England, which contributed to the popularization and spread of the breed, as a result, these dogs came to America, where they laid the foundation for the American line. 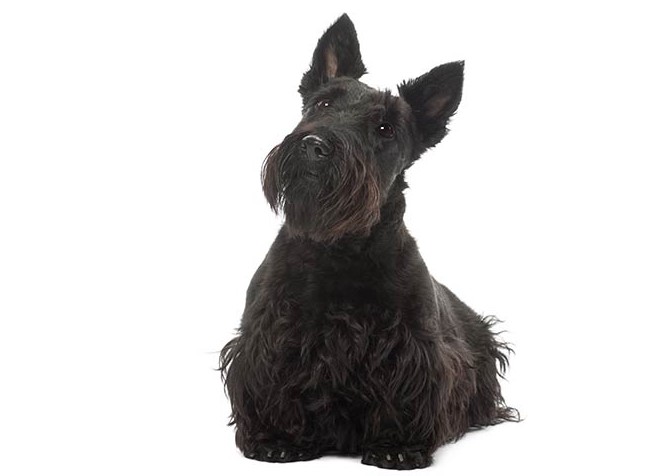 The Scottish Terrier is a short, not overweight dog that allows it to easily enter burrows while hunting. Strong and short-legged, it gives the impression of a strong and active dog with a somewhat long head in relation to the body. Height at withers – 25-28 cm, weight – 8.5-10.5 kg.

The head is long, but in proportion to the body, well set on a strong neck. The Skull of moderate length, almost flat, appears to be narrow. The stop is light. The muzzle is strong, deep, of the same length as the skull. The nose is large and black. Cheekbones not protruding. The teeth are long and meet in a scissor bite. The eyes are almond-shaped, set wide and deep enough, dark brown in color. The ears are thin, neat, with pointed tips, not too close together on the top of the skull.

The topline is flat and straight. The back is short and muscular. The loin is deep. The chest is suspended between the forelimbs, wide. Rounded ribs, which are flattened to the bottom and laid back, give the chest depth. The tail is of moderate length, wide at the base, tapering towards the tip, set vertically, straight, or slightly curved. The front legs are straight, with long shoulders. The paws are large, gathered in a lump, the front paws are slightly larger than the hind ones. The pads are large and firm. Hindquarters with deep thighs and short, strong metatarsals.

The coat is double: consists of a short, dense, soft undercoat and a hard, dense topcoat, wiry to the touch. In general, the coat provides excellent protection from the weather. Wheat, black, or brindle color of any shades. 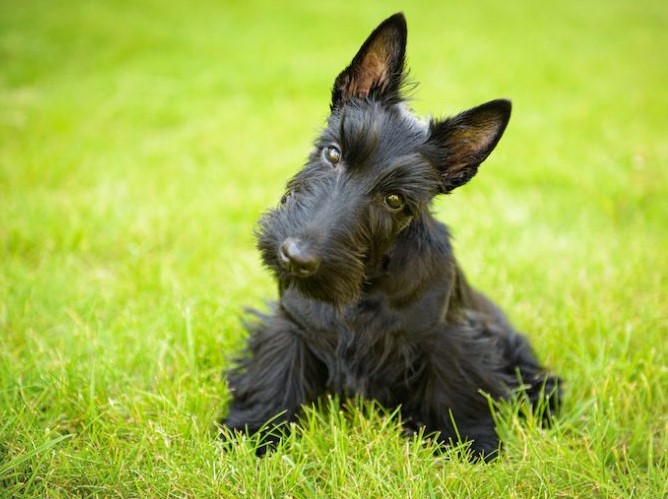 The Scottish Terrier is a loyal dog with dignity. Distinctive character traits for this breed are independence, restraint, activity, courage, sharp mind. Despite their bravery, Scottish Terriers are never aggressive. This serious and judicious dog interprets everything that happens around him in his own way, outwardly it can seem incredibly stubborn. For various reasons, a dog forms its own opinion, which often seems illogical and unreasonable to the owner. Scottish Terriers value freedom very much, but at the same time, they are sensitive and firmly attached to the family, loyal to the owner. As a good watchman, the Scotch Terrier will always warn about the approach of guests to the door with loud barks. In general, he is not particularly talkative, but with great pleasure, he barks at birds, cats, cars, bicycles … This feature should also be taken into account during upbringing and such behavior should not be encouraged.

The Scottish Terrier agrees to be alone for a long time, while the dog does not panic and does not protest with destructive behavior, barking, or howling. Not the best choice for families with children – the dog has a vivid idea of ​​how everything should be arranged, and loud, unpredictable children do not fit into his master plan, as, in fact, cats, other small animals, and reptiles. Of course, if a small puppy grew up in the same house with other animals, then he gets used to them and gets along well, but his patience does not extend to all potential prey that is outside the house. 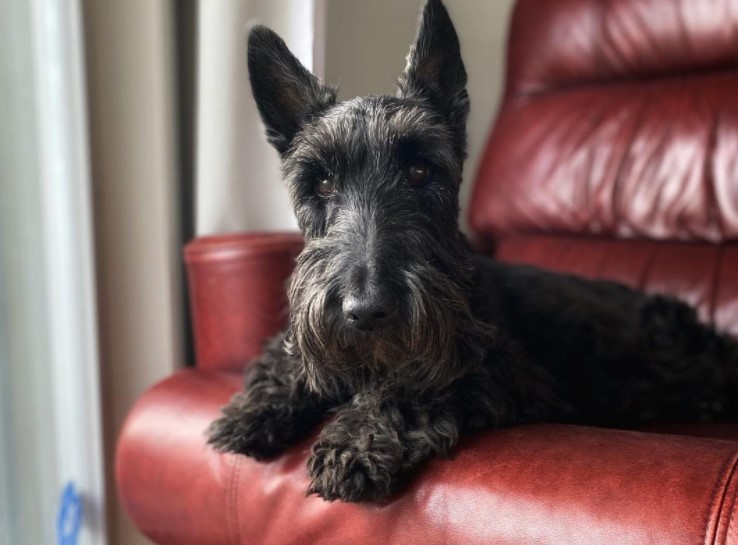 It will take some effort to keep the Scotch Terrier’s good looks. The dog does not require daily brushing and, in general, caring for it is simple, but it should be regular, with the use of quality cosmetics. For Scottish, you need to use a nourishing shampoo, and not one that is intended for coarse coats – it dries out the hair greatly, as a result, the beard becomes sparse and brittle.

Before drying with a hairdryer, a cream-conditioner is rubbed into the wet wool, which does not require rinsing. After drying, the wool is combed first with a brush and then with a comb with rare teeth. When detected, tangles are combed out. After making sure that the dog is well combed, it is allowed to rest in the open air. Until the next bathing, which will be in 2 weeks, the wool is not combed. It is not recommended to wash the Scotch Terrier before an exhibition. It is better to use a spray shampoo before the show, which does not need to be washed off – it will maintain the correct structure of the coarse coat.

The eyes and ears are cleaned as needed, the length of the nails is monitored and, if necessary, trimmed to the optimum length. The ears of the Scottish Terrier rise at about 3 months. During the period of tooth change, some dogs have weakened cartilage, which delays the process of setting the auricle up to 7 months. 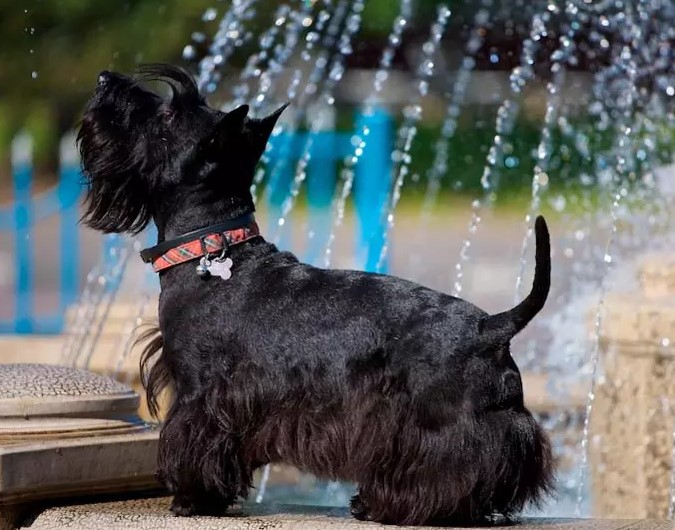 Unfortunately, the Scottish Terrier breed is not a healthy breed today. There are a number of hereditary diseases:

Of course, this impressive list does not mean that every dog ​​is necessarily diagnosed with one or more of the above diseases. Many Scottish Terriers are in good health and get sick relatively rarely, in general, they are hardy and adapt well to different living conditions and climates. Life expectancy is usually 12-15 years. The Scottish Terrier needs standard veterinary preventive measures, vaccinations, treatment against external and internal parasites. A medical examination is recommended annually.