Many people are in no hurry to have female dogs at home, as they are afraid of the problems associated with their subsequent pregnancies and puppy birth. Someone sterilizes the dog to avoid this. And those who still want to tinker with puppies in the future worry about the health of their beloved pet. Indeed, if you treat the issue of dog breeding lightly, problems cannot be avoided. But if you prepare for this in advance and stock up on the necessary baggage of knowledge, everything can go quite successfully. Consider the nuances of mating, pregnancy, and puppy birth of Shih Tzu dogs. 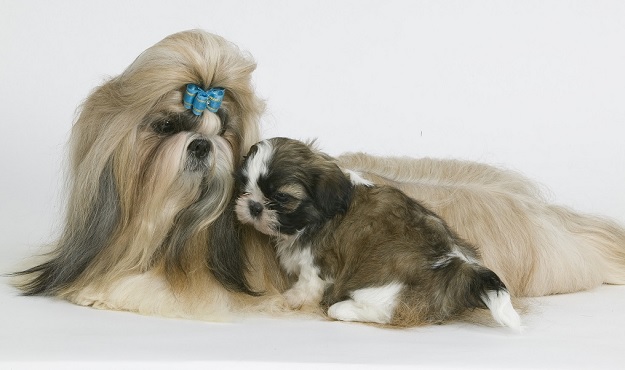 The first estrus for representatives of this breed usually takes place during the period from 6 to 9 months of the dog’s life. If the heat has not come, then it is worth showing the animal to the veterinarian. As for mating, it is better not to do it in the first heat. Let it take place, but the body of the female is not yet fully matured and ripe for gestation and puppy birth. Better to wait another 6 months before the second.

The optimal age for mating females of this breed is one and a half years. The male must also be no younger. It is better if, before mating, both of its participants undergo a medical examination at the clinic. The meeting is usually held at the groom’s premises. Owners usually do not take any part in mating, pets do not need help. Sometimes you just have to lightly seat the males or keep the females in place.

The fact that the mating was successful can only be guessed a month later. The first signs that a female has become pregnant include her lethargy, loss of appetite, manifestations of toxicosis. Such symptoms do not last long and the dog quickly returns to its usual earlier life. An ultrasound will help to confirm the presence of pregnancy.

Shih Tzu puppies carry from 54 to 72 days. However, it is not worth waiting for the onset of seventy days. Such a period is already considered dangerous for both the puppies and their mother. When the deadline comes to an end, the dog should be taken to the veterinarian.

To make the Shih Tzu comfortable in this difficult process, it is worthwhile to prepare a cozy and warm place for it in advance. It can be a box, a basket. It needs to be covered with a disposable diaper and towel.

You can suspect that puppy birth has begun by the dog’s restless behavior. Her body temperature may drop. Puppies usually stop moving in their belly. The process usually takes place without human intervention. The female gives birth herself and bursts the bubbles in which the puppies are.

If the puppy was born, and the mother does nothing, it is important not to let the baby die. It is important to empty the bladder as soon as possible and clear mucus from his/her nose and mouth. And you also need to wipe the baby dry with a towel and attach it to the nipple on the dog’s belly.

The first birth of a Shih Tzu is an exciting event both for the dog itself and for its owner. Help and advice from a veterinarian will be useful. The specialist can be directly involved in the process or be in touch by phone. If you have any questions after puppy birth, do not delay. Both the new mother and her puppies should be taken to the clinic.