Algae is often a serious problem in aquariums. To combat them, a variety of methods are used, one of which is biological – with the help of fish-eating unwanted vegetation. Siamese algae eaters are very effective in clearing lower plants from the aquarium. We offer you to get to know this extremely useful fish.

The Siamese Algae Eater (Crossocheilus siamensis), or SAE (Siamese Algae Eater), is a member of the carp family. The fish is very beneficial by eating algae in the aquarium, and can even help cope with black beards and flip flops. However, do not confuse it with closely related species that have similar coloration, such as Epalceorinch (“Siamese flying chanterelle”, or “false Siamese algae eater”). Despite the fact that these fish previously belonged to the same genus, the real Siamese algae eater cleans the aquarium from algal growths more effectively, does not encroach on higher plants, and does not show aggression towards neighbors. There are other species that look very similar to the Siamese algae eater but differ from it in behavior and some features of color.

Siamese algae in nature can reach a size of 16 cm, in an aquarium it is usually smaller. The body is elongated, silvery in color with a dark stripe that extends from head to tail, going over it, the fins are translucent. The stripe is uneven, with visible jags. Above the black stripe, a brighter light stands out at a certain angle of view. There is one pair of mustaches on the lower lip. The sharpened jaws allow the SAE to scrape off algal growth from plants, decorations, and equipment. Sexual dimorphism is practically not pronounced, females are slightly thicker than males, but it is rather difficult to distinguish them in a group.

How to distinguish a real Siamese algae eater from its counterparts – chanterelles? The SAE has a black stripe that runs along the body and continues on the caudal fin, while the Siamese flying chanterelle has a completely transparent tail. 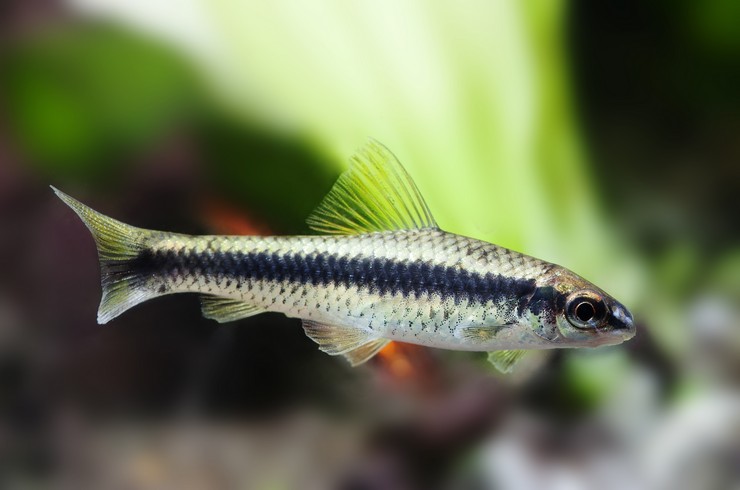 However, under stress, changing conditions, conflicts with representatives of their own species, in real algae eaters, the black stripe on the tail turns pale and may even become completely invisible. But in this case, the unevenness of the strip on the body, which has zigzag bends, as well as the reticulated color of the body, is well manifested, since a dark border runs along the edge of the scales. In chanterelles, the edges of the black stripe are smooth and even. Siamese algae-eaters have one pair of dark antennae on the face, while chanterelles have two pairs, and the black stripe on the head of the latter is less pronounced. There are also clear behavioral differences. 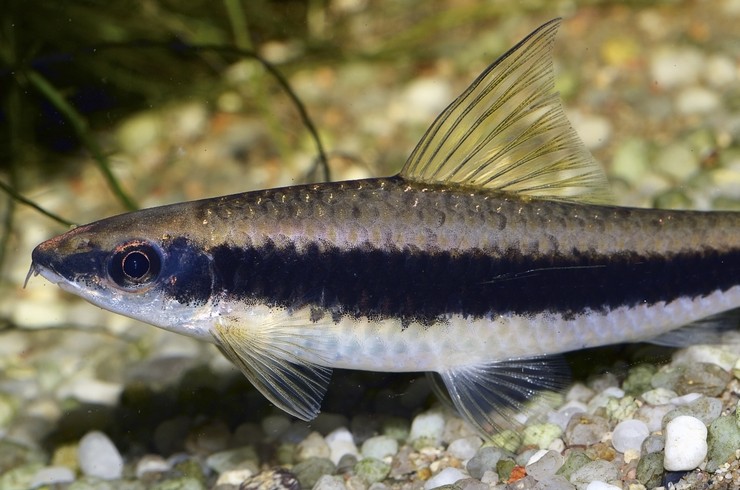 So, when the fish rest, lying on the ground or plants, they assume a characteristic posture, while the SAE rests on the substrate with the pelvic and caudal fins, and the chanterelles – with the pectoral fins. 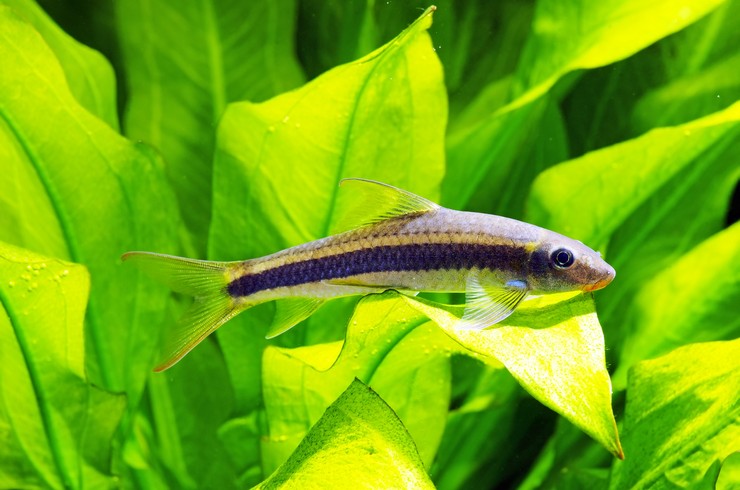 Thus, it is worth being careful when purchasing Siamese algae, although some similar species can also eat algae quite well.

The natural range of the Siamese algae eater covers the rivers and streams of Southeast Asia; this fish is found in Thailand and the Malay Peninsula in the Mekong and Chao Phraya river basins. It prefers fast-flowing water bodies with a sandy bottom, where it lives at a shallow depth among boulders, snags, and tree roots in well-lit areas, eating its favorite food – algae, which actively grow and feel great in such conditions. During spawning, the fish move to deeper and muddy areas.

For keeping Siamese algae eaters, an aquarium with a volume of 100 liters per group of 6 individuals is suitable. The fish are active, but the structure of the swim bladder does not allow them to be in the water column all the time. SAE can often be seen lying on the ground and large leaves of aquatic plants. Therefore, it is recommended to design the aquarium so that there are thickets of live plants while leaving enough free space for swimming. 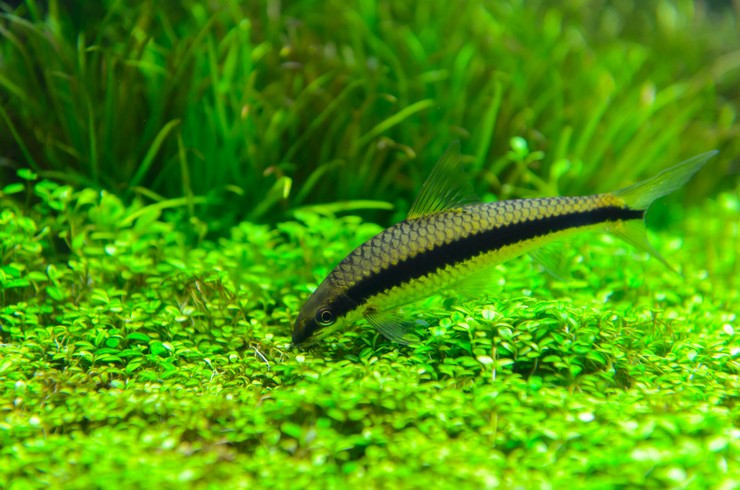 Algae eaters can easily jump out of the aquarium, so you need to cover it with a lid or coverslip, or place plants floating on the surface of the water there.

You can use fine gravel as soil, it will also be useful to place a few snags and stones in the aquarium that imitate natural boulders.

Since in nature, SAEs live in streams of water, they love clean, oxygen-rich water. It is imperative to organize a powerful filtration and aeration system in the aquarium. It is recommended to create a gentle current. Also, don’t forget about weekly water changes of about 30%.

The fish are undemanding to lighting, the light can be either bright or diffused.

The Siamese Algae Eater is a peaceful fish that can coexist with many other commensurate species. It is best to start a school of algae eaters, but these fish do well even when kept in pairs or alone. A hierarchy is established in the school, therefore, in this case, it is desirable that there are at least 6-8 fish. 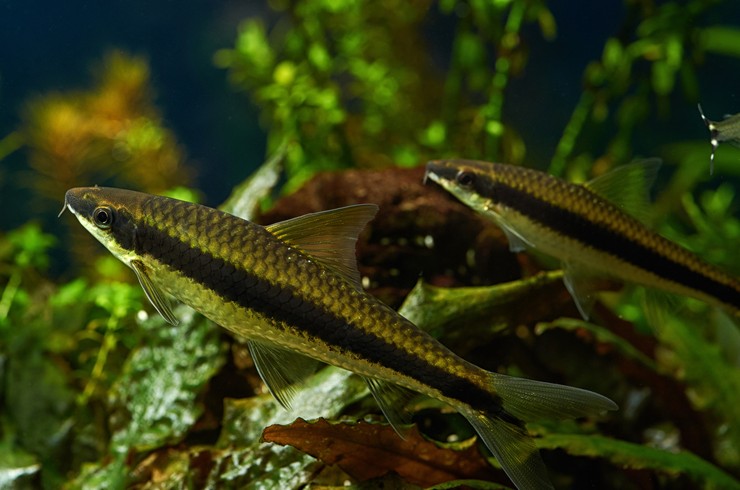 It is not necessary to settle SAE together with two-color labels, which are at war with them in the aquarium. Since the algae eater is a very active fish, it is not recommended to choose it as neighbors to territorial cichlids, SAE will bother them, especially during spawning, which will lead to skirmishes.

Siamese flying chanterelles, which can often be found on sale under the guise of algae eaters, can show aggression towards representatives of their own species and, in general, are more active in protecting the territory.

The main food preferences of the algae eater are clear already from its name. The diet of these beneficial fish is mostly algae, so a flock of algae eaters will be an effective means of fighting fouling in your aquarium. This is one of the few species that are able to actively eat even a black beard. It is worth noting that young individuals cope with this task best of all, with age the algae-eaters become more overweight and less mobile.

The fish usually do not touch the higher plants, the only exceptions are various types of mosses – SAEs like to gnaw them to the “skeleton”.